Joe Biden was formally nominated Tuesday night in a virtual roll call of delegates amid the second night of the virtual Democratic National Convention. Here are some of the top moments.

Joe Biden was nominated the Democratic presidential candidate in a virtual first — a roll call across America that featured its landscapes, industries, people and suffering as the coronavirus swept the country.

Michigan’s delegates stood in front of automobiles representing the state’s auto industry. The woman nominating Biden in Nebraska wore a face mask as she talked about essential workers battling the pandemic. Native Americans spoke from Alaska, New Mexico and North and South Dakota about climate change and educational opportunities.

During the Democratic National Convention on Tuesday, delegates from around the U.S. pledged their support for Joe Biden to officially become the Democratic presidential nominee. Here are the top moments you may have missed. Footage provided is a mixed feed and is a joint effort by the pool and the DNCC.

All 50 states and the U.S. territories were represented.

There were lighthearted moments, as when Rhode Island promoted itself as the “calamari comeback state,” complete with a plate of calamari, and ones that celebrated diversity, as when the delegate from Puerto Rico, Carmelo Rios, delivered his address in Spanish.

And there were serious ones. Khizr Khan, who spoke at the 2016 convention after his son was killed Iraq during the Iraq War, this year appeared from Charlottesville, Virginia, where a racist march ended with one woman being killed. The parents of Matthew Shepard, the young gay man beaten and left to die in 1998, awarded the votes from Wyoming.

There were speeches from former rivals — Minnesota’s Sen. Amy Klobuchar and former South Bend, Indiana, Mayor Pete Buttigieg -- and before the roll call began, New York Rep. Alexandria Ocasio-Cortez, laid out a progressive vision for a more just future as she seconded the nomination of Biden’s last challenger, Sen. Bernie Sanders of Vermont.

“In fidelity and gratitude to a mass people’s movement working to establish 21st century social, economic, and human rights, including guaranteed health care, higher education, living wages, and labor rights for all people in the United States,” she said.

A diverse group of Democratic leaders delivered the keynote address on the second night of the party’s convention, appearing in a montage of spliced together clips to voice support for Biden and deliver a stinging critique of President Donald Trump’s leadership.

The keynote address is a moment that has often been seized by political up-and-comers to deliver a soaring message. That includes Barack Obama, who rocketed to stardom in 2004 when John Kerry was the nominee.

But because the pandemic led to the cancellation of an in-person convention, Democrats opted to showcase a diverse group of local leaders in one video message on Tuesday.

“It didn’t have to be this bad. In the early days of the virus, Donald Trump didn’t listen to the experts,” said Nikki Fried, Florida’s agriculture commissioner.

Long Beach, California, Mayor Robert Garcia added: “We are facing the biggest economic and health crisis in generations because our president didn’t -- and still doesn’t -- have a plan.”

The speakers contrasted Trump’s leadership with that of Biden's and their own, presenting the Democratic ticket as a safe choice for those who are worried.

Watch former Secretary of State John Kerry deliver his full address during the second night of the 2020 Democratic National Convention. Footage provided is a mixed feed and is a joint effort by the pool and the DNCC.

Ady Barkan: Health Care Is a 'Most Basic Human Right'

In a standout moment at Tuesday’s DNC, activist Ady Barkan discussed his personal journey as a father and husband battling ALS, a terminal neurodegenerative disease, while fighting for health care for all.

His video montage was interspersed with footage from his life and activism, serving as a love letter to his son.

“By the time you’re watching this, you will have grown up to be strong and courageous. But I don’t know how much longer I’ll be around for you,” he said in the video.

His political journey began two years ago when Barkan confronted then-Sen. Jeff Flake, Republican of Arizona, about the need for health care reform after a tax cut by Trump put his access to care at risk. But, two years later, he addressed Tuesday night’s DNC from his wheelchair using a computerized voice to talk about health care access.

“We live in the richest country in history and yet we do not guarantee this most basic human right,” adding that Trump and other Republicans are “trying to take away millions of people’s health insurance.” 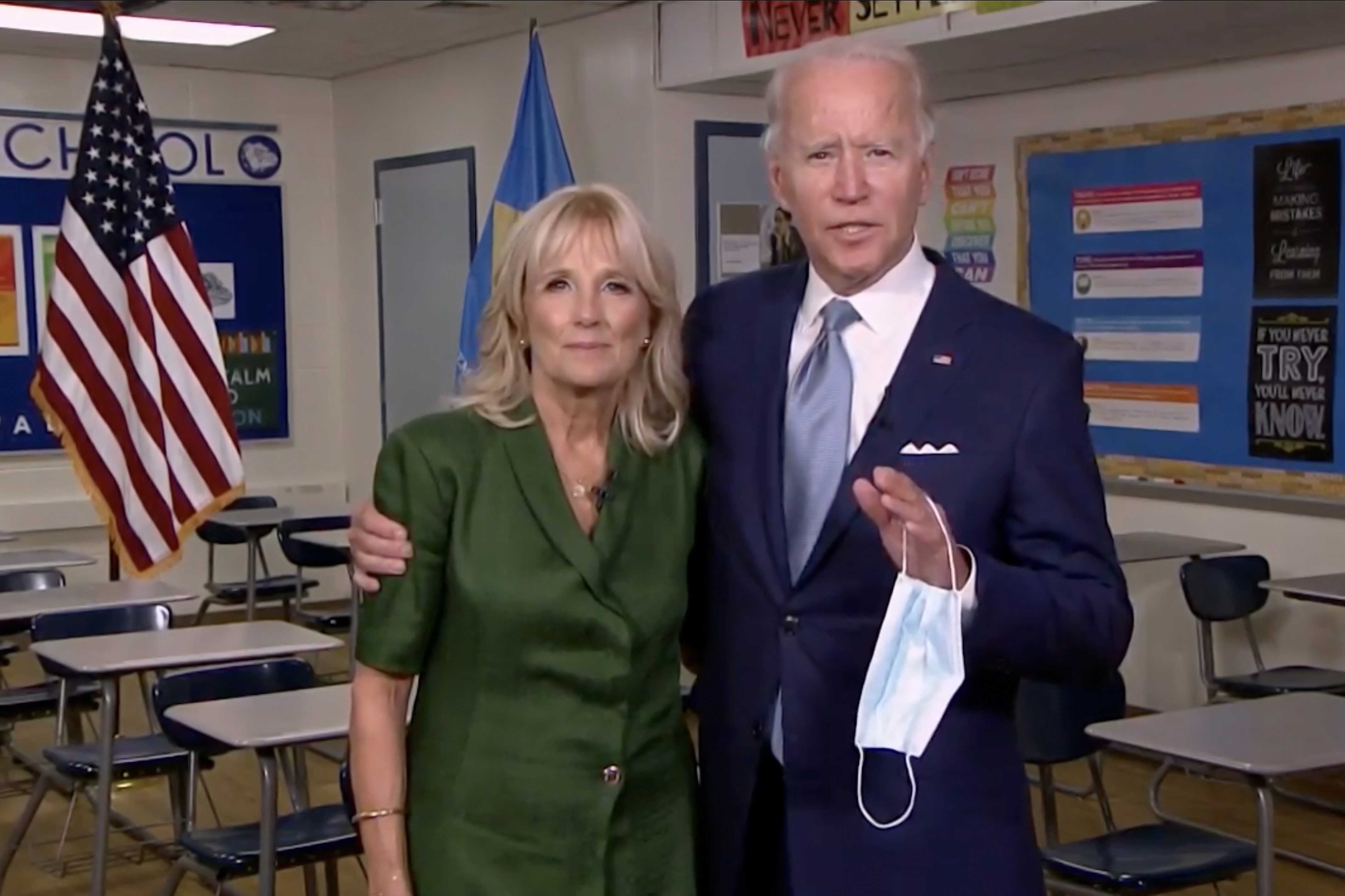 Democrats Make It Official, Nominate Biden to Take on Trump 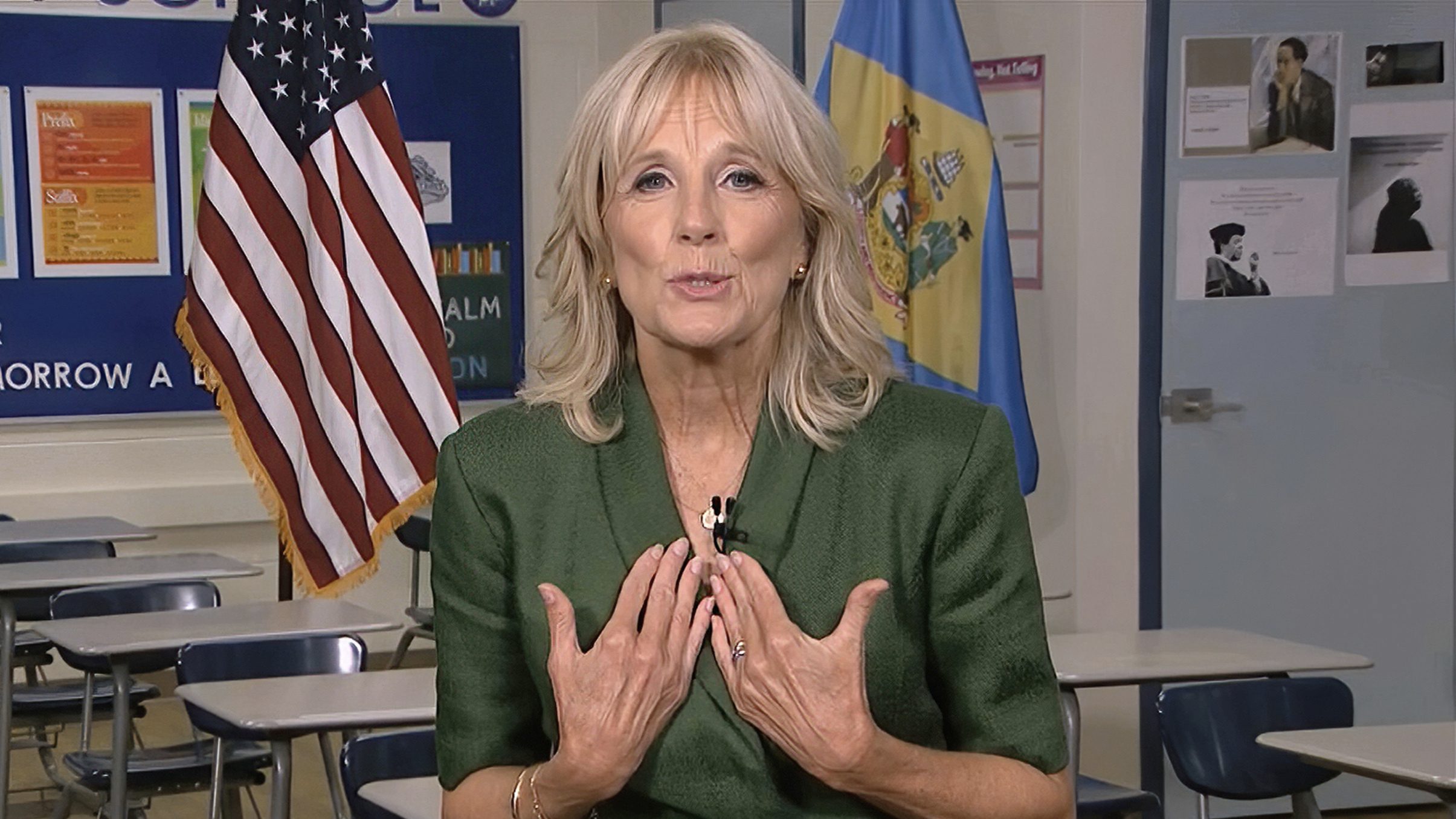 Jill Biden: 'Fighting for the Soul of America'

Dr. Jill Biden, who's been married to Joe Biden for over 40 decades, gave her address to the Democratic National Convention from Brandywine High School, where she once taught.

In an empty classroom she said would normally be filled with the busy sounds of a school day, Jill Biden took the opportunity to speak of the heartbreak she's endured while seeing the suffering throughout the country during the coronavirus pandemic.

"Like so many of you,  I'm left asking how do I keep my family safe?" Biden said.
She said that over the past few months while campaigning during the pandemic, she's seen Americans coming together.

"We're seeing that our differences are precious, and our similarities infinite. We have shown that the heart of this nation still beats with kindness and courage. That's the soul of America Joe Biden is fighting for now," Jill Biden said.

Watch Dr. Jill Biden, wife of Democratic presidential candidate Joe Biden, deliver her full address during the second night of the 2020 Democratic National Convention. Footage provided is a mixed feed and is a joint effort by the pool and the DNCC.

'Today We Have a Country Divided'

Former Secretary of State Colin Powell voiced his support for Joe Biden, saying with him in the White House, “We will never doubt that he will stand with our friends and stand up to our adversaries — never the other way around.”

In taped remarks during the DNC on Tuesday night, Powell said that Biden “will trust our diplomats and our intelligence community, not the flattery of dictators and despots.”

Powell also lamented that “today we have a country divided, and we have a president doing everything in his power to make us that way, to keep us that way.”

Powell served as secretary of state under Republican President George W. Bush from 2001 until 2005, and served as chairman of the Joint Chiefs of Staff under both Bush and Democratic President Bill Clinton.

Watch former President Bill Clinton deliver his full address during the second night of the 2020 Democratic National Convention. Footage provided is a mixed feed and is a joint effort by the pool and the DNCC.
Copyright NBC/Associated Press