The PACT Act will help veterans get disability payments without having to prove their illness was the result of their service. Other health care services will be expanded as well.

“So many of you here today remind us that we have fought for this for so many years,” Biden said during an emotional White House ceremony that reflected the struggles of military families — and the president's personal experience.

Biden was introduced by Danielle Robinson, the widow of Sgt. 1st Class Heath Robinson, who died of cancer two years ago. The legislation is named for him.

She described her late husband as “a soldier as strong as an ox” but also “the ultimate cuddler” for his daughter Brielle, who stood to her mother’s side clutching a stuffed figurine wearing military camouflage.

“Ours is just one story," Danielle Robinson said. "So many military families have had to fight this terrible emotional battle. So many veterans are still battling burn pit illnesses today.”

After the Robinsons took their seats for the president's remarks, Biden addressed Brielle directly.

“I know you miss your daddy. But he’s with you all the time," he said. "He’s inside you. He’s going to whisper in your ear when you have hard decisions to make.”

Then he pointed out that Brielle was sitting next to his grandson the son of Beau Biden.

“His daddy lost to the same burn pits,” Biden said. “He knows what you're going through.” 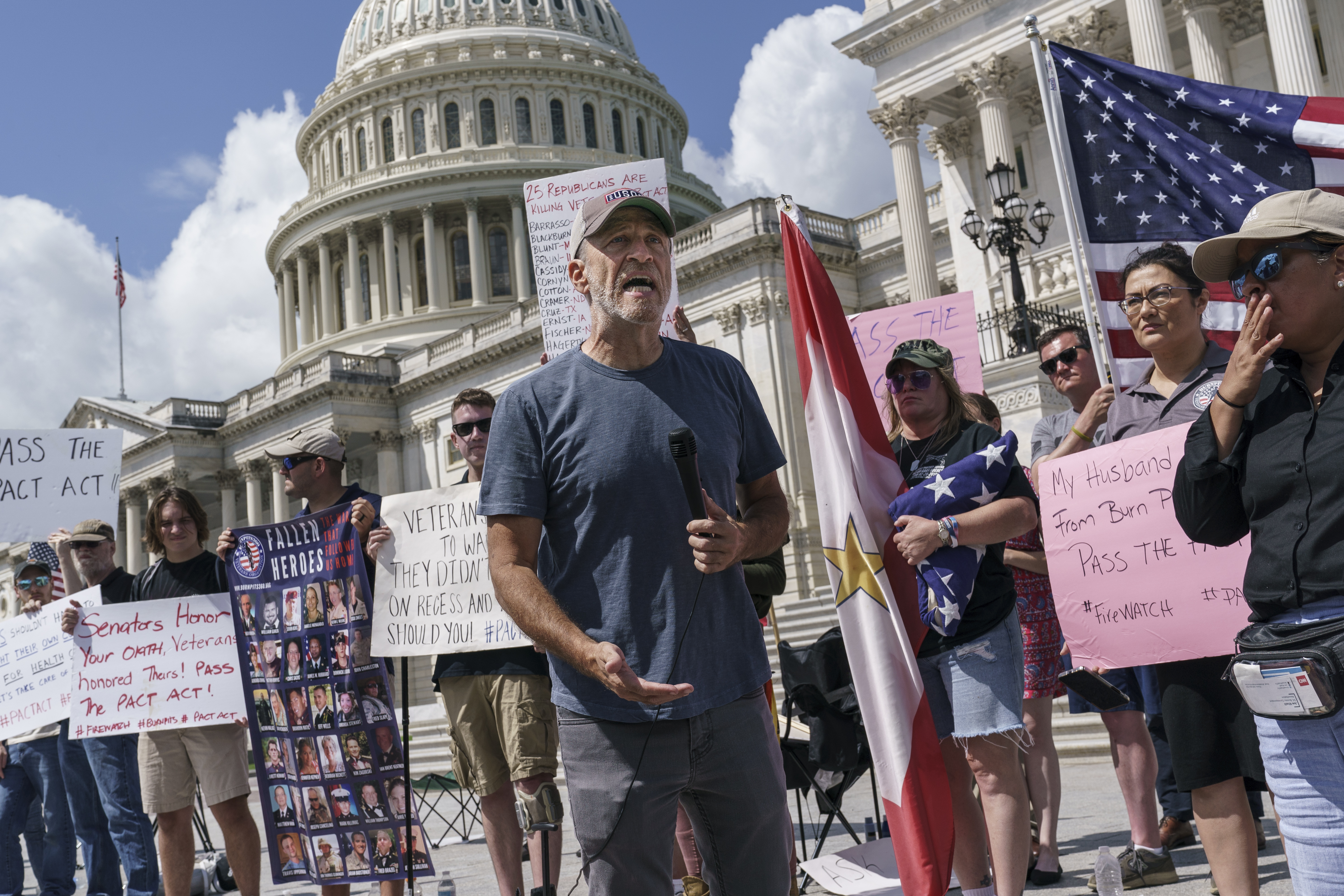 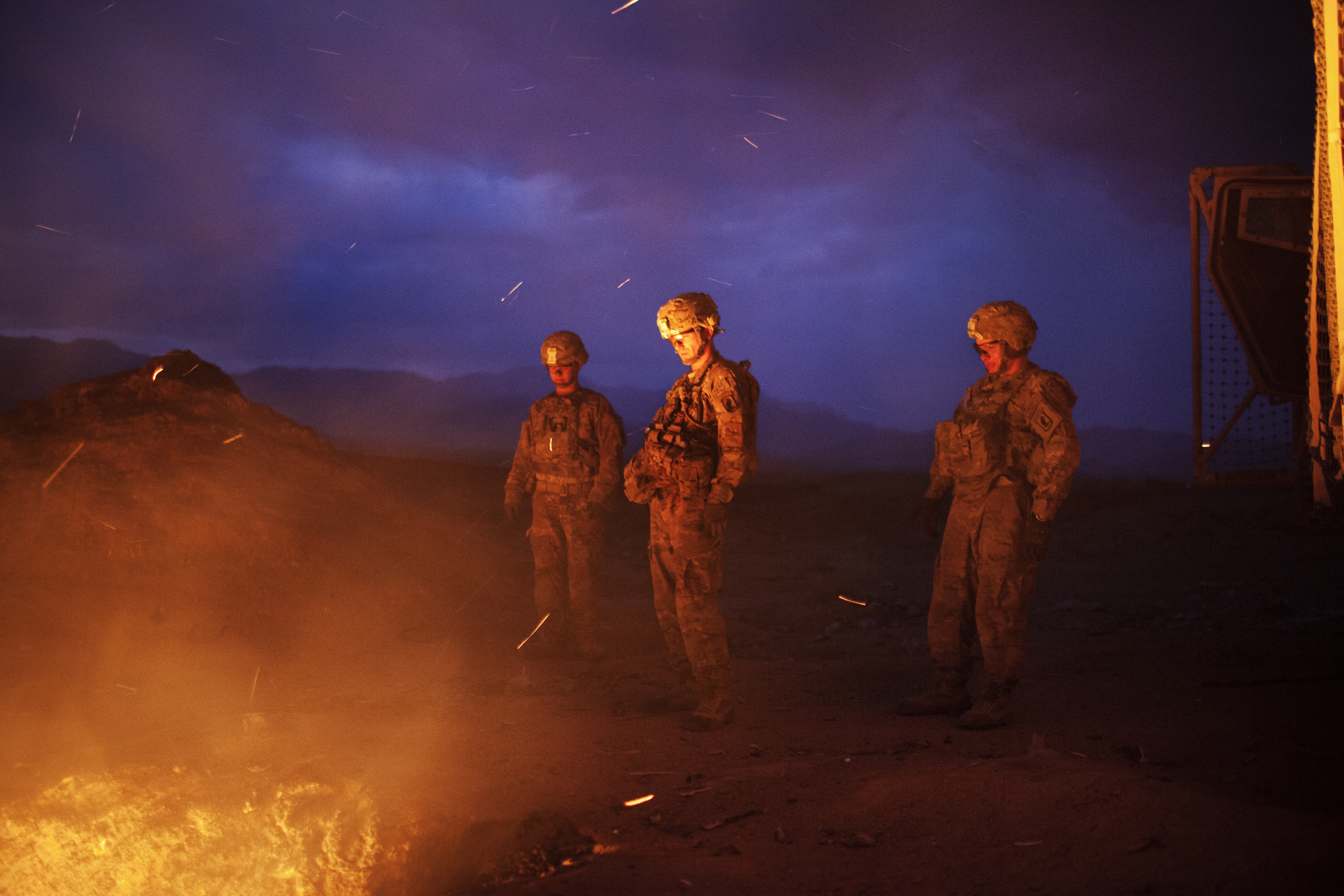 It was the most direct link the president has publicly drawn between Beau's fatal brain cancer and burn pits, which were used to dispose of chemicals, tires, plastics, medical equipment and human waste on military bases.

Biden made addressing the problem one of his priorities during his State of the Union address in March.

“I was going to get this done, come hell or high water,” he said Wednesday.

Sen. Jon Tester, D-Mont., who chairs the Senate Committee on Veterans’ Affairs, said Biden was a driving force behind the measure, which passed last week.

“He was continually pushing because whether Beau died of this or not, I think Joe thinks that it had some impact, and so he wanted this fixed,” Tester said. "And because he thinks it was the right thing to do. So different president, different set of priorities, this would have probably never happened.”

Burn pits were used in Iraq and Afghanistan to dispose of chemicals, cans, tires, plastics, medical equipment and human waste. However, 70% of disability claims involving exposure to the pits were denied by the Department of Veterans Affairs.

“For too long, too many veterans who got sick while fighting for our country had to fight for their care here at home," VA Secretary Denis McDonough said at Wednesday's ceremony.

The legislation will direct officials to assume that certain respiratory illnesses and cancers were related to burn pit exposure, helping veterans get disability payments without having to prove the illness was the result of their service.

“Veterans who have been sickened to the point of being unable to work, unable to take care of their families, won’t have to spend that time fighting the government to get the healthcare they earned," said Jeremy Butler, head of the Iraq and Afghanistan Veterans of America. "This is monumental.”

Although the provision involving burn pits has garnered the most attention, other health care services will be expanded as well.

Veterans who have served since the Sept. 11 attacks will have a decade to sign up for VA health care, double the current five years.

And there's more help for veterans from the Vietnam War. The legislation adds hypertension to list of ailments that are presumed to be caused by exposure to Agent Orange, a herbicide used by the U.S. military to clear vegetation.

In addition, veterans who served during the war in Thailand, Cambodia, Laos, Guam, American Samoa and Johnston Atoll will also be considered to have been exposed to the chemical.

The legislation is considered to be the largest expansion of veterans health care in more than three decades, but it became an unlikely political football shortly before it passed.

On the day that the Senate was expected to grant it final approval, Republicans unexpectedly blocked it. Veterans who had traveled to Washington for a moment of triumph were devastated.

“All the veterans were down there because they were expecting to celebrate," Butler said. “And then they were absolutely stabbed in the back.”

Entertainer and activist Jon Stewart ripped the 41 Republican senators who voted against the PACT Act, blocking a bill that would provide resources for veterans exposed to toxic burn pits. “Cowards, all of them.”

Republicans said they were concerned about technical changes to how the legislation was funded. Democrats accused them of throwing a fit because they were unhappy about a separate deal to advance Biden's domestic agenda on climate change, taxes and prescription drugs.

Instead of going home, some veterans began holding what they called a “fire watch” outside the Capitol, an impromptu vigil to keep public pressure on the Senate.

They stayed around the clock, despite the stifling summer heat and torrential thunderstorms. Jon Stewart, the comedian who has advocated for veterans, joined them as well. Biden wanted to go but couldn't because he was isolating with a coronavirus infection, so he spoke to the demonstrators in a video call when VA Secretary Denis McDonough dropped off pizza.

During Wednesday's ceremony, Biden thanked the former "Daily Show" host for bringing attention to the legislation and helping getting it passed in the Senate. "We owe you big," Biden said.

Days after the demonstration began, the Senate held another vote, and the measure passed with overwhelming bipartisan support.

Veterans were in the gallery watching the vote take place.

“Every single person I was with was bawling. Just bawling," said Matt Zeller, a former Army captain who was among the demonstrators. "I cried for a solid five minutes.”