NBC 7 meteorologist Sheena Parveen said San Diego County could see between a half-inch to one inch of rain Wednesday – and, at this point, anything helps

It’s been a pretty dry winter in San Diego County so the rainfall in the forecast Wednesday is important to help shrink that rainfall deficit. But much rain are we talking about here?

NBC 7 meteorologist Sheena Parveen said San Diego County could see between a half-inch to 1 inch of rain from the system that began hitting the region Wednesday morning.

Now, February is normally the wettest winter month for San Diego County, but that just wasn’t the case this season. Parveen said the normal rainfall for February is 2.27 inches and our region only saw 0.10 inches last month.

And the rainfall deficit doesn’t end there.

NBC 7's Amber Frias heard from the San Diego County Water Authority about the impact of Wednesday's rain on the region's yearly total.

NBC 7 meteorologist Dagmar Midcap said the desert southwest has been experiencing abnormally dry to moderate drought conditions so she agreed, any rain at this point is good.

First Alert Forecast: When Will It Rain? How Long?

NBC 7's First Alert Forecast saw the bulk of Wednesday's rain arriving by the late morning to noon Wednesday. This low-pressure weather system was coming from our west and, Parveen noted, would bring “substantial rain” – at least for one day.

Parveen said the south winds would pick up in the morning and rain would hit around 9 a.m.

“Most rain will be midday with a slight chance for a thunderstorm in the afternoon,” Parveen said. “Temperatures will be chilly with a breezy south wind.”

The National Weather Service San Diego said showers were expected from 11 a.m. to 7 p.m., with scattered rain lingering into Wednesday night in some areas.

Midcap said showers would be widespread and spotty through at least 10 p.m., with a few areas of heavier rain still lingering to the south in San Diego and in the northern Baja region overnight into early Thursday.

Rain pummeled the county throughout the morning. By lunchtime, it was showtime for those showers -- and they brought a friend: hail.

A band of thunderstorms could be heard in Kearny Mesa and small hail poured down. The NWS said the heavy rain and hail was moving into downtown San Diego and Coronado by about 1 p.m.

And then, this happened.

In Poway, the storm moved strongly through in the early afternoon bringing rain, wind, hail, thunder and lightning.

By 3 p.m., it all subsided and just sprinkles remained with cloudy skies.

By the evening, NWS said a few scattered showers lingered in the county with areas to the north largely dry. Showers were expected to taper off Wednesday night.

The NWS said wet snow is expected in San Diego’s mountains above 5,500 feet of elevation.

To that end, the agency said a winter weather advisory will be in effect Wednesday from 1 p.m. to 10 p.m. for those mountain areas above 5,500 feet. The NWS said total wet snow accumulations of 1 to 3 inches are expected.

The NWS warned that travel conditions would be difficult in the mountains – especially during the Wednesday evening commute – due to snow-slickened roads, reduced visibility and, at times, fog.

The NWS said a wind advisory will be in effect from 12 p.m. to 10 p.m. Wednesday for San Diego County deserts where west winds between 20 and 30 mph – with gusts up to 55 mph – are expected. The high winds would topple tree limbs or power lines, so anyone driving in the deserts should take precaution.

The NWS also issued a beach hazards statement until 6 p.m. Wednesday due to the possibility of strong rip currents and elevated surf. The agency said this storm was bringing thunderstorms and lightning to local beaches.

The NWS tallied up some precipitation totals as of 9:30 p.m. Wednesday in communities at the coast, valleys and mountains.

The agency said no rain had been measured in the deserts yet.

What's Next for San Diego's Weather?

NBC 7’s First Alert Forecast shows conditions drying out by Thursday and temps being a bit warmer on Friday.

Parveen said weather models -- at least as of Wednesday -- appeared to show another storm system swirling in Northern California, and likely staying in that region through the weekend instead of coming south.

Even if San Diego County does not get any showers this weekend from that second storm system, Parveen said temperatures will be cooler through Saturday and Sunday.

"We'll potentially have a few rain chances next week with a couple of different weather systems," she added. 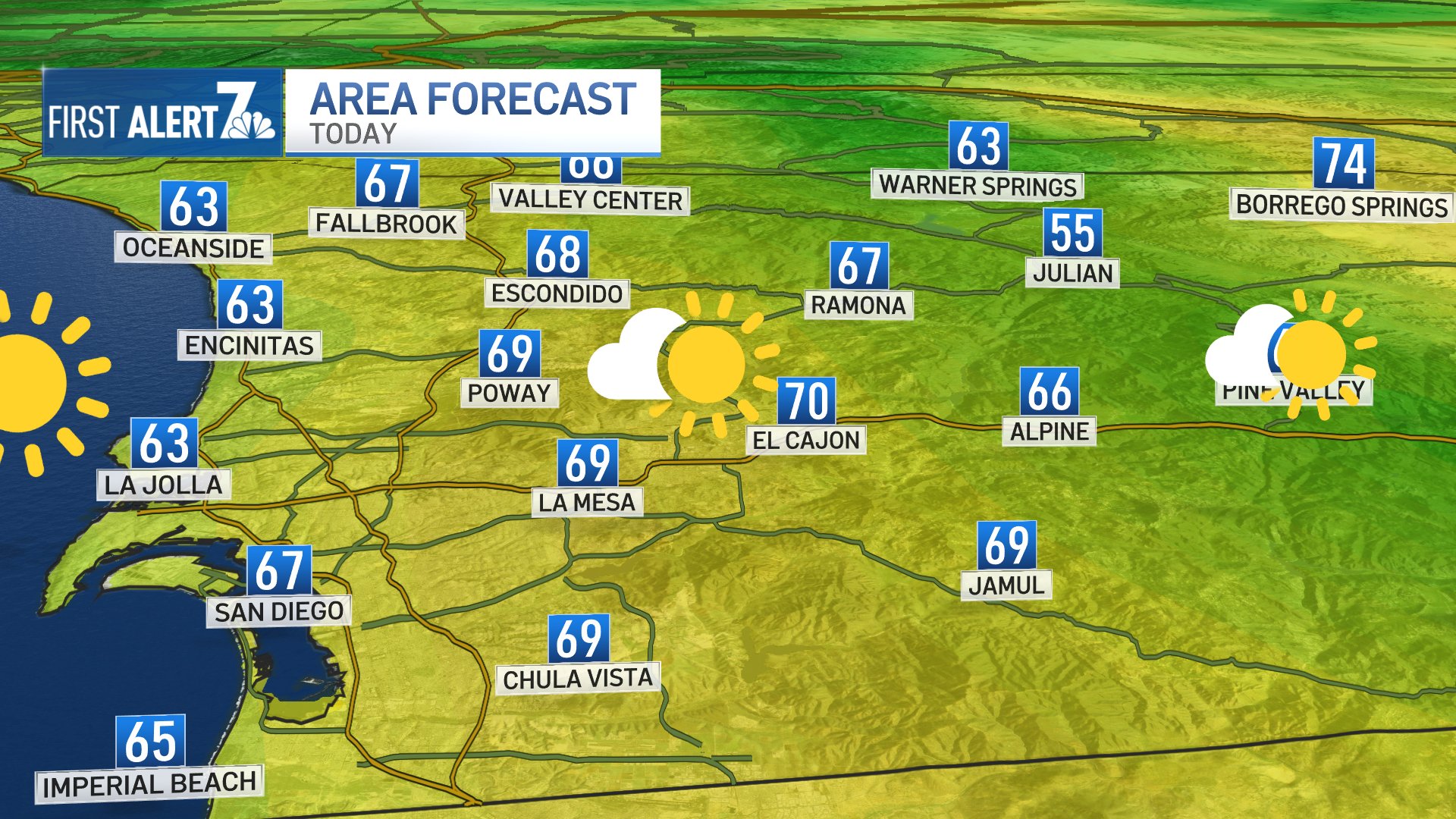