What might it take for the Friars to land the generational talent? Here are some possibilities

If that's not the first thing AJ Preller says to Nationals general manager Mike Rizzo, the Padres GM is doing it wrong.

Listen to the latest episode of OnFrair below.

We're about to embark upon the 2nd half of the baseball season (I know, mathematically that happened a couple of weeks ago but some baseball traditions are OK to stick with and after the All-Star break has been known as the 2nd half for decades so just roll with it). The Padres are 10 games over .500, which is pretty darn good considering they haven't had their all-world shortstop take a single at-bat yet and the bullpen has been shaky.

Manager Bob Melvin has been as good as advertised and the starting rotation has proven itself one of the deepest in the game. Those two things I'm confident will continue into October. Defensively they started with a historic errorless streak and have seen flashes of brilliance, despite a recent spate of sloppy play that can probably be chalked up to fatigue after playing 31 games in 31 days.

So, really, the two most glaring needs for San Diego are clear: improve the offense and the relief corps. Seems simple enough, right? 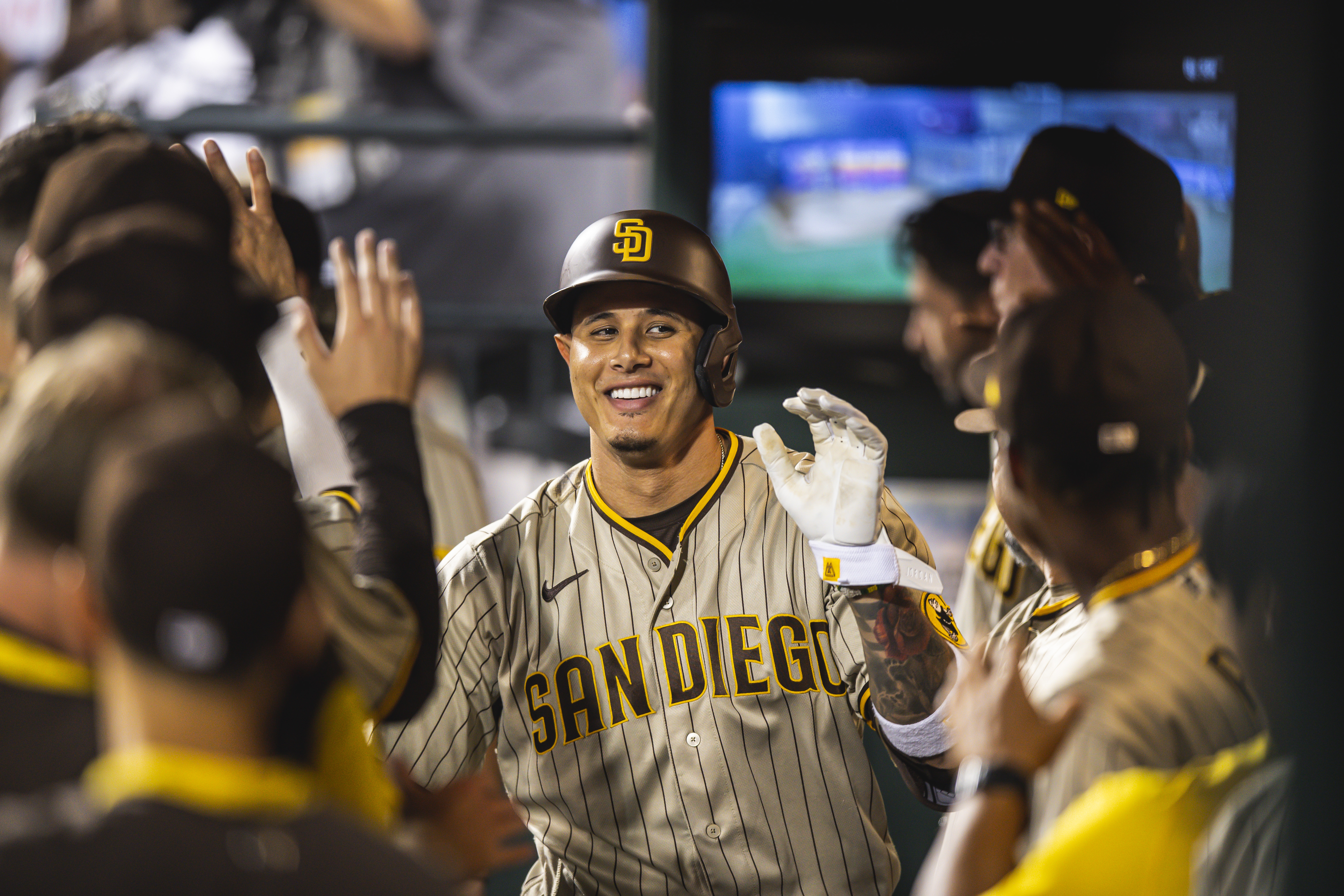 Manny Mashes, Staff Shines in Padres Win Over the Mets The bullpen might be the easier fix. The Padres will be getting Drew Pomeranz back at some point and there's probably nobody on the trade market who's as good as he is when healthy, especially when it comes to lefties. Adrian Morejon looked dominant in his last relief role and if he stays healthy (granted, a large IF) he's a boon to the bullpen. Taylor Rogers looks like he's put his mid-season struggles behind him and is back to being one of the game's best closers again.

The offense is a lot trickier. Their outfield and 1st base production has been atrocious. Wil Myers is about to return from a knee injury and looked great in a short rehab stint at Lake Elsinore. If he's back to being the old Myers (again, a big IF) it would be a massive upgrade. However, there is zero confidence right now that Trent Grisham or Eric Hosmer will figure it out any time soon.

On the positive side, right before the All-Star break Luke Voit showed signs of getting ready for a hot streak. If that happens he's the kind of wrecking ball that changes an entire lineup. Fernando Tatis Jr. is swinging a bat again and if he's able to return, even for the last six weeks of the regular season, the Padres ability to score runs improves tenfold. I've heard folks say there's no better trade deadline acquisition than just getting Tatis back in the lineup.

Juan Soto is out there. He rejected the richest contract in baseball history recently, then on Monday said he's not opposed to testing free agency. Bottom line here: Soto doesn't want to be in Washington during a rebuild and the Nationals almost have to trade him at some point. With 2 1/2 years of contractual control now is the time to do it.

How good is Soto? He's 23 years old and has already been to a pair of All-Star Games, finished in the top-5 in MVP balloting twice, and won a World Series. In that 7-game showdown with Houston, by the way, Soto hit three homers, drove in seven runs, and had an 1.178 OPS ... as a 20-year-old. So, yeah, he handles the spotlight just fine.

According to Baseball Reference here are the hitters Juan Soto is most similar to at this age:

In case you're curious, that's good.

Soto's availability is going to have all 29 big league teams checking in on him. The Padres are going to be one of them. and they have a legitimate chance at landing the slugging left-handed hitting outfielder. But it is going to mean parting with some really good baseball players.

We all know how negotiations work. One side makes a lowball offer. The other side counters with a ridiculous offer. Hopefully, they find a middle ground where both sides win. With that in mind here are three trade proposals ... one the Padres would likely make, one the Nationals would probably ask for, and the one that's fair for both sides.

The Padres want desperately to part with Hosmer's contract and Myers will be off the books after this season. Martinez has been extremely good as a starter and reliever in his return to the US and Knehr has been solid in limited big league time. Wood and Campusano are two of the top prospects in the game.

Problem here is nobody is Hosmer is one of the worst players in baseball on a contact that's even more awful, Myers is hurt, and Martinez can opt out after this year. Plus, Campusano plays the same position as Keibert Ruiz, the catching prospect the Nats got from the Dodgers in last year's deal that sent Max Scherzer and Trea Turner to LA. This deal has zero chance of ever happening but, hey, you have to ask.

That's one of the game's most talented young left-handed pitchers, an infielder who was the 6th overall prospect in baseball before recently graduating from that status, a 2-time All-Star who has three years of contractual control left, a top of the rotation workhorse, and four of the Padres' top-8 prospects.

That's also a hard no.

As much as the Padres want and need Soto, that many players in return is ridiculous. This deal has zero chance of ever happening but, hey, you have to ask.

The Fair Deal For Both Sides

My gut tells me the Nationals want guys who are going to help at the big league level right now, as well as over the next decade or so. It would also help ease the pain that fan base is going to feel to be able to say "We got a former Cy Young winner with another year on his team-friendly deal, a 2-time All-Star in his prime, a 23-year-old lefty who was the minor league pitcher of the year just three years ago, and the Padres 1st round picks from 2020 and 2021, the first of which just played in the MLB Futures Game."

Does that sting for the Padres? Yes. Yes it does. But, it also makes sense.

Snell's stuff is off the charts but he simply has not panned out in San Diego. He might be a "change of scenery" candidate. Plus, he's making $13.1 million this year. Soto is at $17.1 million. The Padres are about $650,000 under the Competitive Balance Tax so, unless they want to blow past it, they'll need a way to make the salaries come close to matching.

Cronenworth is about to hit arbitration and is due a significant payday. In this scenario, the Padres hang on to Abrams, who is figuring out the Major Leagues just fine. The 21-year-old is hitting .333 with an .802 OPS in July. He can handle 2nd base duties and is a lot less expensive for a few years.

I still believe Gore is going to be a front of the rotation stud but that's what it's going to take to land Soto. Hassell and Mears are both still in A-ball but offer serious upside. Hassell is the 23rd overall prospect in the game and Mears has tantalizing raw power, given the 500-foot home run he hit at Fort Wayne this year and the 117-MPH homer he ripped in Spring Training last year.

So, what does that mean for the Padres moving forward? First off the lineup looks a whole lot more potent from top to bottom:

Myers has been playing centerfield at Lake Elsinore and has handled the position in the past. Plus, he can't be worse that what we're seen from Trent Grisham over the last month.

As for the pitching staff, you could certainly do worse than this:

Martinez moves back into the rotation and you're on a traditional 5-man swing again, something the Padres can definitely afford to do since they gave their starters so much extra rest in the first half of the season. I think that's something both sides would have to seriously consider and a win for San Diego and Washington.

But, for kicks, let's throw out one more wild, dream scenario:

The "We Done Lost Our Minds" Trade

The Nationals are going up for sale. They have a few truly awful contracts on the books and getting rid of as many of those as possible would make selling a whole lot easier. So, why not have these clubs help each other out?

Nobody is going to take the four years and $140 million left on an injured Stephen Strasburg's contract. But, Corbin has been a disaster since helping win that 2019 World Series. He's due $59 million over 2023 and 2024. Still just 33 years old, he could still have something left in the tank. The Nats are going to trade Bell, who's dramatically outperforming his 1-year, $10 million deal, before the deadline anyways so why not throw him in?

Hosmer is making $21 million this year but that drops to $13 million a year over the next three years and there's always the hope he opts out. Myers gets $20 million that comes off the books after the season ends. All of a sudden the Nats have a lot more financial flexibility, with a couple more prospects in Rosario and Lizarraga thrown in to sweeten the deal.

For this season, San Diego offloads $55.5 million and brings on $50.1 million, giving them a little breathing room to make another deal for some bullpen help. They don't have to deal with Hosmer's contract, giving them more flexibility to sign Musgrove to an extension. Now, bringing Corbin on board probably means they can't bring back both Manaea and Clevinger, but they can retain one of them, and for Soto that's just what you do.

How does this impact the Padres future? Honestly, right now I don't care. With Soto, Tatis Jr., Machado, and no Hosmer, they have the chance to win a World Series RIGHT NOW.

You do that and figure out the rest later.