The GOP convention marks a crucial moment for Trump, a first-term Republican president tasked with reshaping a campaign

Trump's campaign had promised to offer an inclusive and uplifting prime-time message, hoping to broaden his appeal beyond his hard-core base by featuring the next generation of party stars including two Republicans of color, Rep. Tim Scott and former U.N. Ambassador Nikki Haley, Yet any sense of optimism was largely overshadowed by most speakers’ dire warnings that Democrat Joe Biden would destroy America, allowing communities to be overrun by violence. 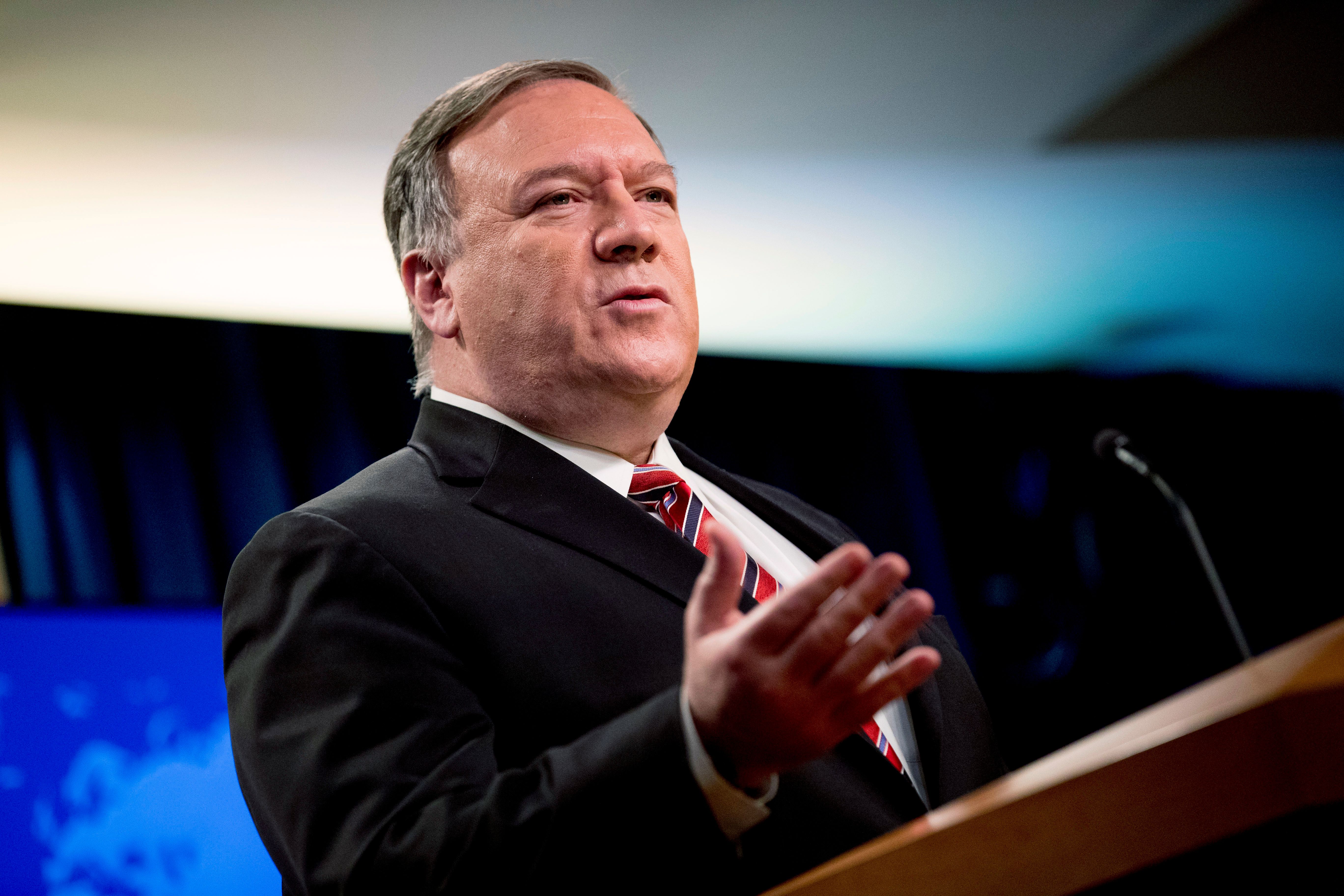 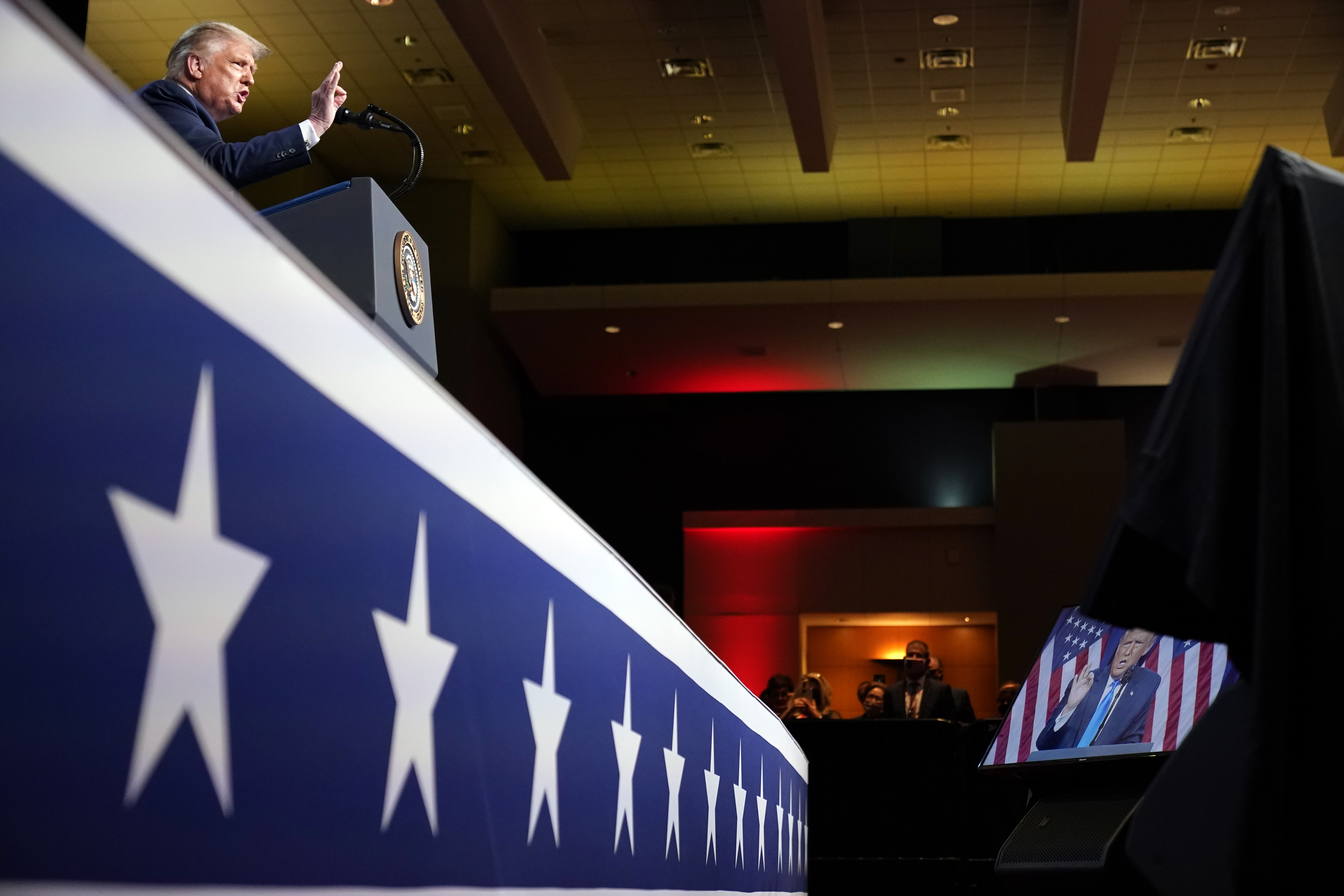 “They’ll disarm you, empty the prisons, lock you in your home, and invite MS-13 to live next door,” Gaetz declared.

Trump, who was not scheduled to deliver his keynote convention address until later in the week, made multiple public appearances throughout the first day of the four-day convention. And while the evening programming was carefully scripted, Trump was not.

“The only way they can take this election away from us is if this is a rigged election,” Trump told hundreds of Republican delegates gathered in North Carolina, raising anew his unsupported concerns about Americans’ expected reliance on mail voting during the pandemic. Experts say mail voting has proven remarkably secure.

The GOP convention marks a crucial moment for Trump, a first-term Republican president tasked with reshaping a campaign he is losing by all accounts, at least for now.

Andrew Pollack, the father of Meadow Pollack, speaks about the events that followed the shooting at Marjory Stoneman Douglas High School which claimed the life of his daughter.

A deep sense of pessimism has settled over the electorate 10 weeks before Election Day. Just 23% of Americans think the country is heading in the right direction, according to a new poll from The Associated Press-NORC Center for Public Affairs Research.

More than 177,000 Americans have been killed by the pandemic and millions more have been infected. Coronavirus-related job losses also reach into the millions

Trump and his supporters on Monday night touted his response to the pandemic while standing alongside front-line workers in the White House, although he glossed over the mounting death toll, the most in the world, and his administration's struggle to control the disease.

Organizers also repeatedly sought to cast Trump as an empathetic figure, borrowing a page from the Democrats' convention playbook a week ago that effectively highlighted Biden's personal connection to voters.

Former pro football player and Heisman Trophy winner Herschel Walker talked about his long friendship with President Donald Trump on the first night of the 2020 RNC.

The evening program highlighted the tension within Trump's Republican Party. His harsh attacks against Democrats who are trying to expand mail voting and demonstrators protesting deaths in police custody, for example, often delight his die-hard loyalists. Yet the party pointed to a somewhat more diverse convention lineup with a more inclusive message designed to expand Trump's political coalition beyond his white, working-class base.

Two of the three final speakers on the prime-time program were people of color: former U.S. ambassador to the United Nations Nikki Haley and South Carolina Sen. Tim Scott, the only Black Republican in the Senate.

And one of several African Americans on the schedule, former football star Herschel Walker, defended the president against those who call him a racist.

“It hurts my soul to hear the terrible names that people call Donald,” Walker said. “The worst one is ‘racist.’ I take it as a personal insult that people would think I would have a 37-year friendship with a racist.”

Polling shows that Black Americans continue to be overwhelmingly negative in their assessments of the president’s performance, with his approval hovering around 1 in 10 over the course of his presidency, according to Gallup polling.

“Democrats no longer view the government’s job as protecting honest citizens from criminals, but rather protecting criminals from honest citizens," the McCloskeys said in remarks that broke from the optimistic vision for America organizers promised.

They added: “Make no mistake: No matter where you live, your family will not be safe in the radical Democrats’ America."

Those cheering Trump’s leadership on the pandemic included a coronavirus patient, a small business owner from Montana and a nurse practitioner from Virginia.

“As a healthcare professional, I can tell you without hesitation, Donald Trump’s quick action and leadership saved thousands of lives during COVID-19,” Amy Ford, a registered nurse who was deployed to New York and Texas to fight the coronavirus.

Ahead of President Trump's big week, a major rift in his family is coming to light. Audio tapes of Maryanne Trump Barry, Trump's sister, leaked right before the Republican National Convention was to kick off, with Trump expected to be on hand for his official nomination before heading back to Washington for the rest of the convention.

Some of the planned remarks for the evening program were prerecorded, while others were to be delivered live from a Washington auditorium.

The fact that the Republicans gathered at all stood in contrast to the Democrats, who held an all-virtual convention last week. The Democratic programming included a well-received roll call video montage featuring diverse officials from across the nation. The Republicans spoke from the ballroom in Charlotte and were overwhelmingly white.

Trump said he had made the trip to North Carolina to contrast himself with his Democratic rival, who never traveled to Wisconsin, the state where the Democratic convention was originally supposed to be held. Vice President Mike Pence appeared with him.

The president has sought to minimize the toll of the coronavirus pandemic and he barely addressed it on Monday, but its impact was plainly evident at the Charlotte Convention Center, where just 336 delegates gathered instead of the thousands once expected to converge on this city for a week-long extravaganza. Attendees sat at well-spaced tables at first and masks were mandatory, though many were seen flouting the regulation.

Trump also panned the state's Democratic governor for restrictions put in place to try to prevent the spread of the virus, which has killed more than 175,000 people in the country and infected millions. The president accused Gov. Roy Cooper of “being in a total shutdown mode," and claimed the restrictions were aimed at trying to hurt his campaign.

Hear what Senator Tim Scott, R-S.C., had to say during his speech on night 1 of the 2020 Republican National Convention.

Mecklenburg County Health Director Gibbie Harris said she had “shared concern about the lack of mask wearing and social distancing in the room” with RNC staff and had “been assured that they are working hard to address these issues.”

Republicans will spend the week trying to convince the American people that the president deserves a second term. Aides want the convention to recast the story of Trump's presidency and present the election as a choice between his vision for America’s future and the one presented by Biden.

“Over the next four days, President Trump and Republicans are going to talk about all we have achieved the past four years, and cast an aspirational, forward-looking vision about what we can achieve in the next four,” said GOP Chair Ronna McDaniel.

While he campaigned aggressively across the country throughout last week’s Democratic convention, Biden made no public appearance on Monday.