Send your pictures to isee@nbcsandiego.com.

Clouds will be increase throughout the morning,  and temperatures will take a dive as a result. Highs on Thursday will be in the mid- and upper 60s, some 10-15 degrees cooler than Wednesday.

Showers or sprinkles were forecasted to kick in by Thursday afternoon, though the heavier rain probably won't hit until well after the sun goes down. This first of three storms drop much rain -- a couple of 10ths of an inch at the coast, maybe one-half inch in the mountains. It will be the warm segment of the trio and will mostly resaturate the atmosphere and set the stage for what will follow. 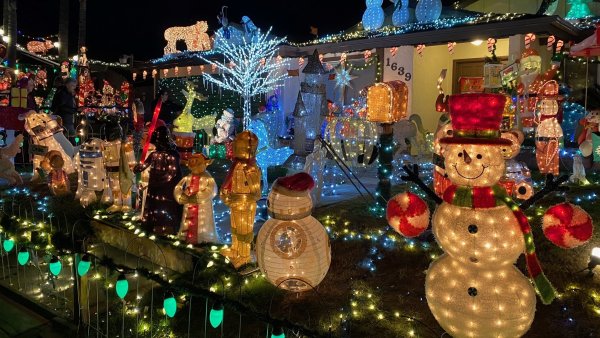 Joy to The World: Photos of Festive Holiday Displays in San Diego County

The second storm will be much "juicier"and colder, with a lot of instability in it.  This should not only bring copious amounts of rain over a short period but could fire off some thunderstorms, which could produce hail and maybe even a few funnel clouds. Cold, windy, wet conditions will persist through the day Saturday and into early Sunday.

The final act of this weekend's show of winter will roll through Monday into Tuesday.  Like Act II, it should drop some mountain snow, a fair amount of rain and keep the colder temperatures and windy conditions in place.

There are also astronomical high tides taking place over the weekend. Combined with storm surf, we could see some coastal flooding and heavy seas pounding the entire coastline.  All in all, sounds like a great weekend to catch a movie or get caught up on some indoor chores.