Who's Behind Local COVID-19 Protests?

For the second consecutive weekend, San Diego County saw protestors calling for an end to county public health orders. One of the organizers says the protests are "organic" and "grassroots," but NBC 7 Investigates looked deeper and found some apparent campaign connections.

Between 200-300 people lined the streets in Pacific Beach on Sunday, holding signs and waving flags. Demonstrators called to reopen businesses and condemned the wearing of face masks – many choosing to protest in tight spaces without them, children in tow.

Officers didn't issue any tickets, but frequently asked demonstrators to spread out.

The Pacific Beach Town Council released a statement calling the protest inconsiderate to their community.

Naomi Soria was one of the organizers of the Pacific Beach protest. She also organized the protest downtown last weekend. For that, the San Diego Police charged her with a misdemeanor.

Her lawyer, Mark Meuser tweeted about how proud he was to take her case.

Turns out the founder of that nonprofit is Meuser's boss, a lawyer named Harmeet Dhillon who also happens to be the National Committeewoman of the Republican National Convention for California.

While there is no direct tie to the president that NBC 7 Investigates found, Dhillon heads both the law firm fighting for Soria and the nonprofit publicizing the protest organizer. 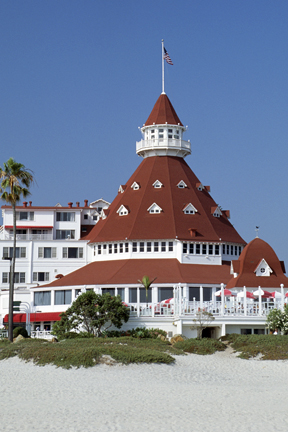 A spokesperson for the San Diego Police Department says they’ve investigated the organizer of the Pacific Beach protest and handed over their report to the City Attorney’s office for review. The City Attorney's office said it wouldn't comment on the case until that review is completed, and a decision is made on whether they will file a case in court.

Harmeet Dhillon sent NBC 7 a statement calling the assertion that the Trump campaign is tied to the COVID-19 protests "specious." Dhillon went on to say that over the years, she has “gone to bat in court over first amendment cases for people of every political persuasion."

Below is a copy of her entire statement:

I understand you asked a question about whether, because I support the President, somehow the Trump administration is involved in or behind COVID protests.

I have been a civil rights activist on First Amendment issues since before I even graduated from college.

While I am a volunteer in Republican politics at the state and national level, my profession for 27 years has been in trial litigation, with a substantial and consistent First Amendment focus. Several lawyers at my firm share this focus, and do not share my politics.

I note that our co-counsel on the case is NOT a Trump supporter — he is a fellow member of the First Amendment Lawyers Association, who firmly believes, as do I, in the right of every citizen to protest, speak, assemble, petition the government.

Over the years I’ve gone to bat in court for people of every political persuasion.

I note that in California, the media was given an exception from the shutdown orders, but the rest of the First Amendment was ignored. The media should have asked questions about that all along, but I haven’t seen them. Are you asking the governor why he blocks people of faith and citizens from exercising their First Amendment rights, and why only freedom of the press was respected in his orders? These are questions that you should ask.