The report published by the Department of Homeland Security's Office of the Inspector General found that while the agency had justified reasoning to flag journalists, attorneys and advocates, officials did not follow CBP policy

Beginning in late 2018, migrants from Central America made their way to the U.S.-Mexico border in Tijuana, Mexico. As the caravan reached the San Ysidro Port of Entry in South San Diego County, so did journalists, attorneys, and advocates that were there to meet them.

In the months that followed, journalists who covered the caravan, as well as those who offered assistance to caravan members, said they felt they had become targets of intense inspections and scrutiny by border officials.

In March 2019, NBC 7 Investigates broke the border surveillance story after obtaining leaked documents from Homeland Security Investigations Special Agent-turned-whistleblower, Wesley Petonak, and additional research showed the U.S. government, under the umbrella of “Operation Secure Line,” created a secret database of activists, journalists, and social media influencers tied to the migrant caravan. When they crossed the border, individuals in the database were subject to hours-long screenings and, in some cases, had alerts place on their passports.

Operation Secure Line started in November 2018 in response to the arrival of more than 9,100 migrants traveling in a caravan from Central America to seek asylum at the U.S. border, according to DHS records reviewed by NBC 7. Agents said most of those asylum seekers were from Guatemala, Honduras and El Salvador.

An alarmed Petonak reached out to NBC 7 in early 2019 after he came across a PowerPoint presentation file in which nine slides revealed that agents working under Operation Secure Line appeared to be tracking the movements of journalists, attorneys and humanitarian aid workers.

Petonak would learn that many of the targets were U.S. citizens who had broken no laws, yet were subjected to hours-long secondary screenings, had alerts placed on their passports, or worse, denied access into Mexico.

Petonak said he shared his concerns with his supervisors and explained why he felt those tactics were violating basic constitutional rights, but his supervisors pushed back, describing the tactics as “standard practice.” So, Petonak decided to take action. He took photos of the PowerPoint slides and shared that confidential information with NBC 7 Investigates.

More on the Secret Database 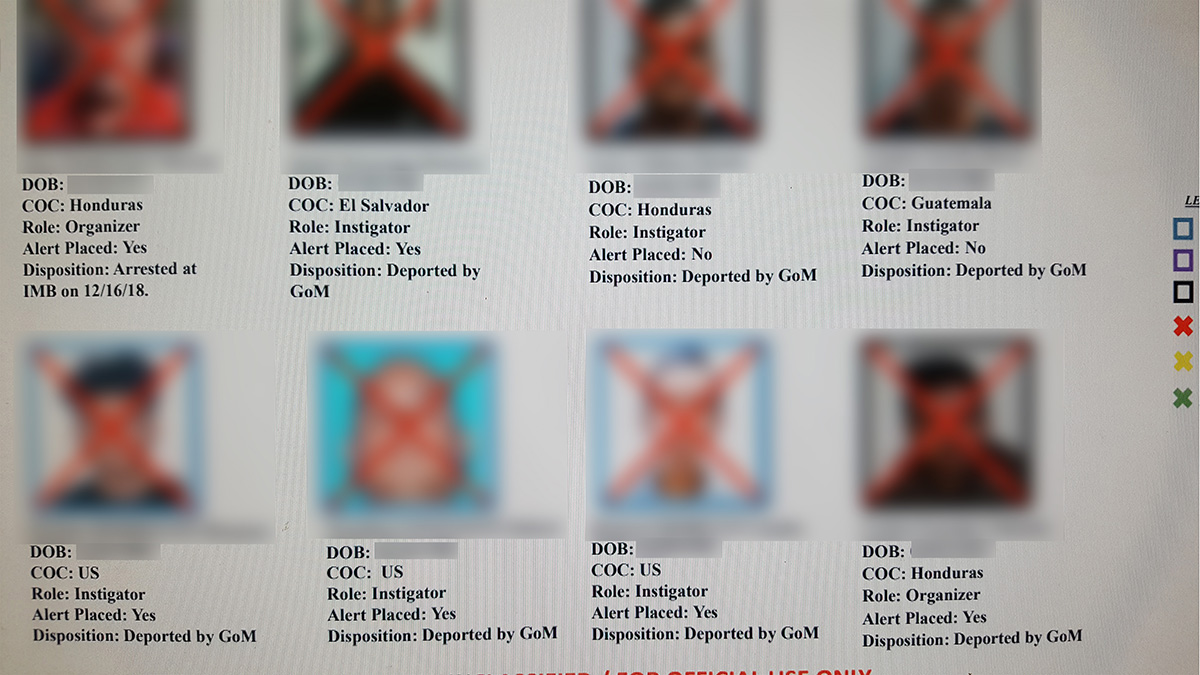 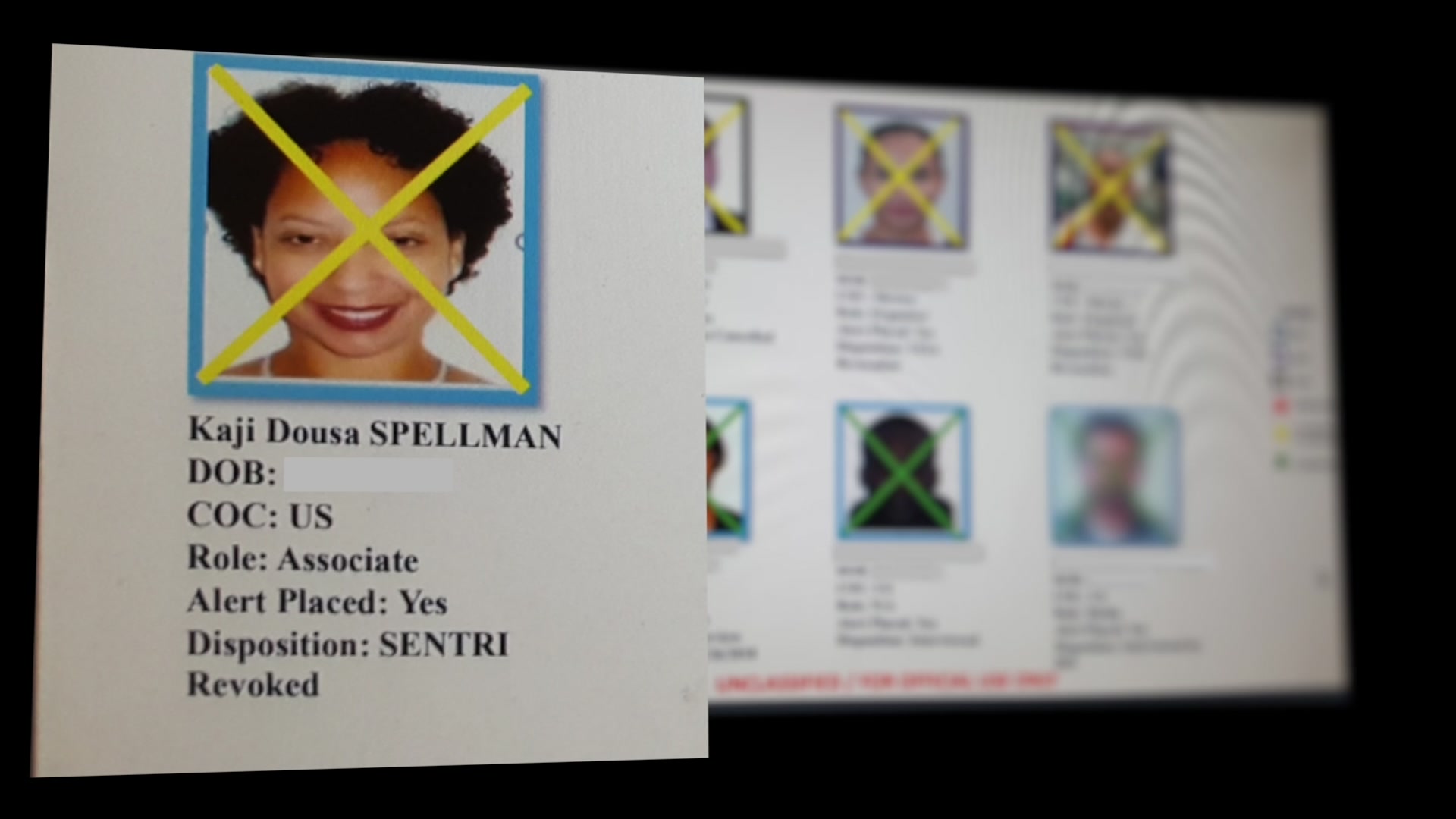 The American Civil Liberties Union is suing the Trump Administration for the creation of a secret database used to track journalists, attorneys, border advocates, and others. The database was first reported by the NBC 7 Investigates Team back in March. NBC 7's Alex Presha has the details.

Thirty months after NBC 7's first report on the situation, the Department of Homeland Security's (DHS) Office of the Inspector General (OIG) published a 47-page report of their findings.

The report, dated Sept. 20, 2021, found U.S. Customs and Border Protection (CBP) officials likely inadvertently added several U.S. citizens suspected of organizing or being associated with the 2018-2019 migrant caravan to a list that triggered digital alerts or "lookouts" when the individuals arrived at the border, which went against CBP policy, according to the report.

"Lookouts are electronic alerts placed in CBP’s computer system that can result in a variety of different actions. Most of the caravan-related lookouts resulted in lengthier, enhanced inspections for those individuals when they crossed the U.S. border," the report said.

These American photojournalists and attorneys said they suspected the U.S. government was monitoring them closely, but until NBC 7 obtained the confidential documents, they couldn’t prove it.

The Department of Homeland Security's Office of Inspector General said the practice of tracking activists, lawyers, and reporters near the border was only taking place in San Diego, however NBC 7's Mari Payton has more on confirmed reports of databases also being used in Texas and Arizona.

"Although we determined CBP’s lookouts on a number of journalists present at an illegal border crossing were unnecessary, we found no evidence that CBP placed these lookouts to harass the journalists," the OIG report states.

The OIG report also found that there was "no genuine basis" for an unidentified CBP official in December 2018, to have emailed a Mexican immigration official an unencrypted list of 24 migrant caravan "organizers or instigators,” including 14 Americans, and explicitly requesting that Mexico prevent the individuals from entering Mexico.

It was later identified that during a January 2019 meeting with Mexican officials, a separate unidentified CBP official also had shared two documents, including a PowerPoint presentation with pictures, names, dates of birth, countries of citizenship, and other information about dozens of American and foreign nationals. This PowerPoint presentation was also provided to the Regional Director of a Mexican government immigration agency in a WhatsApp message.

House committees, elected officials, and Mexico have all reacted to NBC 7's exclusive look into a secret database on activists, journalists, and social media influencers tied to the migrant caravan. NBC 7's Mari Payton has more.

The individuals listed include 10 journalists, seven of whom are U.S. citizens, a U.S. attorney, and 48 people from the U.S. and other countries labeled as organizers, instigators or their roles “unknown.” The target list includes advocates from organizations like Border Angels and Pueblo Sin Fronteras.

NBC 7 Investigates blurred the names and photos of individuals who haven’t given us permission to publish their information.

The documents show each subject's photo, often from their passport, but in some cases from their social media accounts, along with their personal information. That information includes the person’s date of birth, their “country of commencement,” and their alleged role tied to the migrant caravan. The information also includes whether officials placed an alert on the person’s passport.

Some individuals had a colored “X” over their photo, indicating whether they were arrested, interviewed, or had their visa or SENTRI pass revoked by officials.

The report acknowledged that the official who created the PowerPoint told OIG Investigators they were not knowledgeable about most of the individuals included in the PowerPoint, and he was simply consolidating CBP’s information about the migrant caravan from several places into one document to brief the San Diego Sector Border Patrol Chief.

An excerpt of the report includes:

"Although we determined that CBP’s caravan-related lookouts were not intended to harass or intimidate caravan associates, we also found CBP officials did not always follow CBP policy related to lookouts. All CBP’s caravan-related lookouts were related in some way to suspected criminal activity. However, nearly half of the caravan-related lookouts (25 out of 51) were on people for whom there was no evidence of direct involvement in illegal activity. Instead, those lookouts were based solely on the individuals’ associations with other people who were suspected of illegal activity. For example, CBP officials placed lookouts on 15 U.S. citizens who either previously crossed the border with, or were connected on social media to, a person whom CBP suspected of planning violence at the border. CBP had no information to suggest these 15 individuals might be involved in planning violence or were present at one of the incursions."

Read the full report below, and find the CBP's response on page 39.

The investigation and subsequent publishing of the report follow public outcry that immediately followed NBC 7's reporting. Several Democratic lawmakers, including now Vice President Kamala Harris, called for an internal investigation into the agents’ practices. DHS eventually agreed. The Office of Inspector General for DHS announced in August 2019 that it would conduct its own, separate investigation.

A coalition of more than 100 civil rights organizations also demanded that DHS and CBP put an end to using the tactics. And several individuals listed in the document as “Suspected Organizers, Coordinators or Instigators” tied to the migrant caravan — including a New York-based pastor who had crossed the border to pray with asylum seekers —sued CBP and the DHS over their practices.

“A database does not exist…”

After our initial reporting, NBC 7 filed a Freedom of Information Act request for records that would reveal how DHS chose its surveillance targets tied to the migrant caravan, and the extent of those controversial investigations.

When DHS, CBP, ICE, and U.S. Citizenship and Immigration Services (USCIS) declined to produce those documents NBC 7 and the Reporters Committee for Freedom of the Press (RCFP) filed a federal lawsuit challenging the government’s refusal to release detailed information about the “database or application” used to track journalists, attorneys and immigration advocates.

On Aug. 29, 2019, as part of CBP’s Status Report, the agency said it would not produce any records tied to the list because “no such ‘database(s)/application(s)’ exist."

While some are saying President Trump is "weaponizing" U.S. Customs and Border Protection with a secret government database about the caravan, some border expects are defending the list. NBC 7's Rory Devine has more.

NBC and RCFP disagreed with CBP’s position and pressed for further explanation because CBP and DHS officials had never before denied the existence of those documents.

“While the NBC 7 article suggests that the information described...is drawn directly from an underlying database or application, this is not accurate,” CBP’s statement read. “The information described in the NBC article and the accompanying ‘screenshots’ appear to be drawn from a single, multipage electronic document. A search of CBP’s records did not reveal any database or application of activists, journalists, and social media influencers tied to the migrant caravan, as described in the NBC 7 article.”

Petonak told NBC 7 he felt the government was parsing words over its use of Microsoft tools. He stood by his assertion that all of the information shared with NBC 7 was held in an application accessed and used by hundreds of border agents in San Diego and across the U.S.-Mexico border.

Ultimately, the information was accurate, as outlined in the OIG report.