After pulling out of the women’s gymnastics team finals on Tuesday so she could focus on her "mental health," four-time Olympic gold medalist Simone Biles said she was inspired by tennis star Naomi Osaka, who cited her mental health when she withdrew from the French Open last month.

“Whenever you get in a high-stress situation, you kind of freak out," Biles told reporters during a press conference after Team USA took home the silver medal. "I have to focus on my mental health and not jeopardize my health and well-being."

The two women have been at the forefront of increasing recognition that mental health is equally important to physical well-being, particularly among athletes, who have long been expected to dismiss the former.

"Physically, I feel good," Biles told Hoda Kotb on NBC's "TODAY" show following her withdrawal. "Emotionally, it varies on the time and moment. Coming to the Olympics and being head star isn't an easy feat."

While athletes at the elite level are used to performing in high-pressure situations, there is no stage quite as big as the Olympics.

Just a day before the team finals, where the U.S. ultimately took home the silver medal, Biles spoke out on Instagram about the pressure of holding “the weight of the world” on her shoulders.

“I know I brush it off and make it seem like pressure doesn’t affect me but damn sometimes it’s hard hahaha!” Biles wrote in the caption. 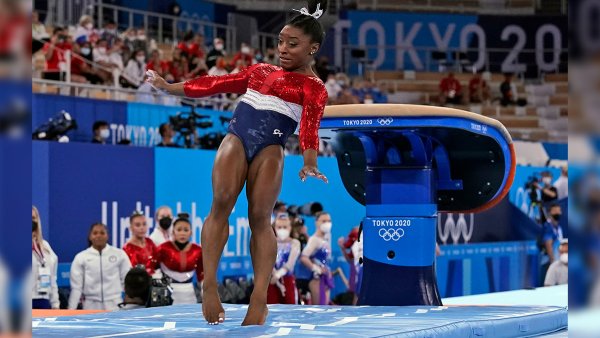 After withdrawing from the French Open, Osaka — who had the honor of lighting the Tokyo Olympics Cauldron at the Opening Ceremony — opened up about dealing with “long bouts of depression” since the 2018 U.S. Open, which she won by beating Serena Williams in a final filled with controversy.

At the time, the 23-year-old also revealed that speaking with the media makes her anxious. In an essay published in Time magazine earlier this month, the world’s No. 2-ranked tennis player wrote, "It's OK to not be OK, and it's OK to not talk about it."

"I communicated that I wanted to skip press conferences at Roland Garros to exercise self-care and preservation of my mental health," she wrote. "I stand by that. Athletes are humans."

Osaka's decision to prioritize her mental health was initially met with criticism from media personalities and French Open officials who saw her refusal to speak to the press as not fulfilling her obligation. But support from fellow athletes soon poured in, their messages tinged with empathy of knowing systems that don't prioritize their well-being.

Pro athletes including retired tennis star Martina Navratilova, Seattle Seahawks QB Russell Westbrook and many others shared messages of support for tennis phenom Naomi Osaka after she withdrew from the French Open, citing concerns about her mental health and the impact of media interviews on it.

Conversations around mental health and athletes — led by a number of black athletes — gained momentum earlier this month when Sha'Carri Richardson, who received a one-month suspension after testing positive for a chemical found in marijuana at the Olympic trials, said she had used the drug after her biological mother’s recent death sent her into “a state of emotional panic.” Richardson missed the Tokyo Olympics.

Those three athletes are hardly alone in publicly sharing the difficulties of competing amid mental health struggles. Olympic sprinter Noah Lyles shared last year that he started taking anti-depressants when managing his feelings with the help of a therapist was no longer enough.

Olympic swimmer Simone Manuel took a break training earlier this year after being diagnosed with overtraining syndrome, a condition that is defined as a "maladapted response to excessive exercise without adequate rest."

In a recent interview with Lester Holt, Bowe Becker — who won gold this weekend in the 4x100-meter freestyle relay — said he had “pretty much retired” from swimming nine months ago.

“COVID hit, I wasn’t really in a good place mentally, kind of burnt out from the sport of swimming, so I went home and spent six months there," 24-year-old from Reno, Nevada said. Becker said the time off helped him a "better mentality towards the sport and reignited the flame to keep going.”

The sporting world offered Biles support in response to her withdrawal. U.S. Olympic and Paralympic Committees CEO Sarah Hirschland said Biles had made them “so proud... of who you are as a person, teammate and athlete.”

“We applaud your decision to prioritize your mental wellness over all else, and offer you the full support and resources of our Team USA community as you navigate the journey ahead,” Hirschland said.

Others found power in Biles’ decision.

Biles, one of the most decorated gymnasts in Olympic history, did not rule out returning to competition in Thursday's all-round final. Asked what her goal for the Tokyo Olympics was now, Biles replied: “To focus on my well-being. There is more to life than just gymnastics”.