The presidents of four countries on Russia’s doorstep visited Ukraine on Wednesday and underscored their support for the embattled country, where they saw heavily damaged buildings and demanded accountability for what they called war crimes carried out by Russian forces.

The visit by the presidents of Poland, Lithuania, Latvia and Estonia was a strong show of solidarity from the countries on NATO’s eastern flank, three of them like Ukraine once part of the Soviet Union. The leaders traveled by train to the Ukrainian capital, Kyiv, to meet with their counterpart Volodymyr Zelenskyy, and visited Borodyanka, one of the nearby towns where evidence of atrocities was found after Russian troops withdrew to focus on the country's east.

“The fight for Europe’s future is happening here,” Lithuanian President Gitanas Nauseda said, calling for tougher sanctions, including against Russia’s oil and gas shipments and all the country’s banks.

Elsewhere, in one of the most crucial battles of the war, Russia said more than 1,000 Ukrainian troops had surrendered in the besieged southern port of Mariupol, where Ukrainian forces have been holding out in pockets of the city. A Ukrainian official denied the claim, which could not be verified.

Russia invaded on Feb. 24 with the goal, according to Western officials, of taking Kyiv, toppling the government and installing a Moscow-friendly one. But the ground advance slowly stalled and Russia lost potentially thousands of fighters. The conflict has killed untold numbers of Ukrainian civilians and forced millions more to flee. It also has rattled the world economy, threatened global food supplies and shattered Europe's post-Cold War balance.

A day after he called Russia's actions in Ukraine “a genocide,” U.S. President Joe Biden approved $800 million in new military assistance to Ukraine, saying weapons from the West have sustained Ukraine's fight so far and “we cannot rest now.” The munitions include artillery systems, armored personnel carriers and helicopters.

In his daily late-night address, Zelenskyy noted that the prosecutor of the International Criminal Court, Karim Khan, visited the Kyiv suburb of Bucha, where more than 400 bodies were found, on Wednesday as an ICC investigation gets underway. Evidence of mass killings of civilians was found there after the Russian retreat.

“It is inevitable that the Russian troops will be held responsible. We will drag everyone to a tribunal, and not only for what was done in Bucha,” Zelenskyy said late Wednesday. 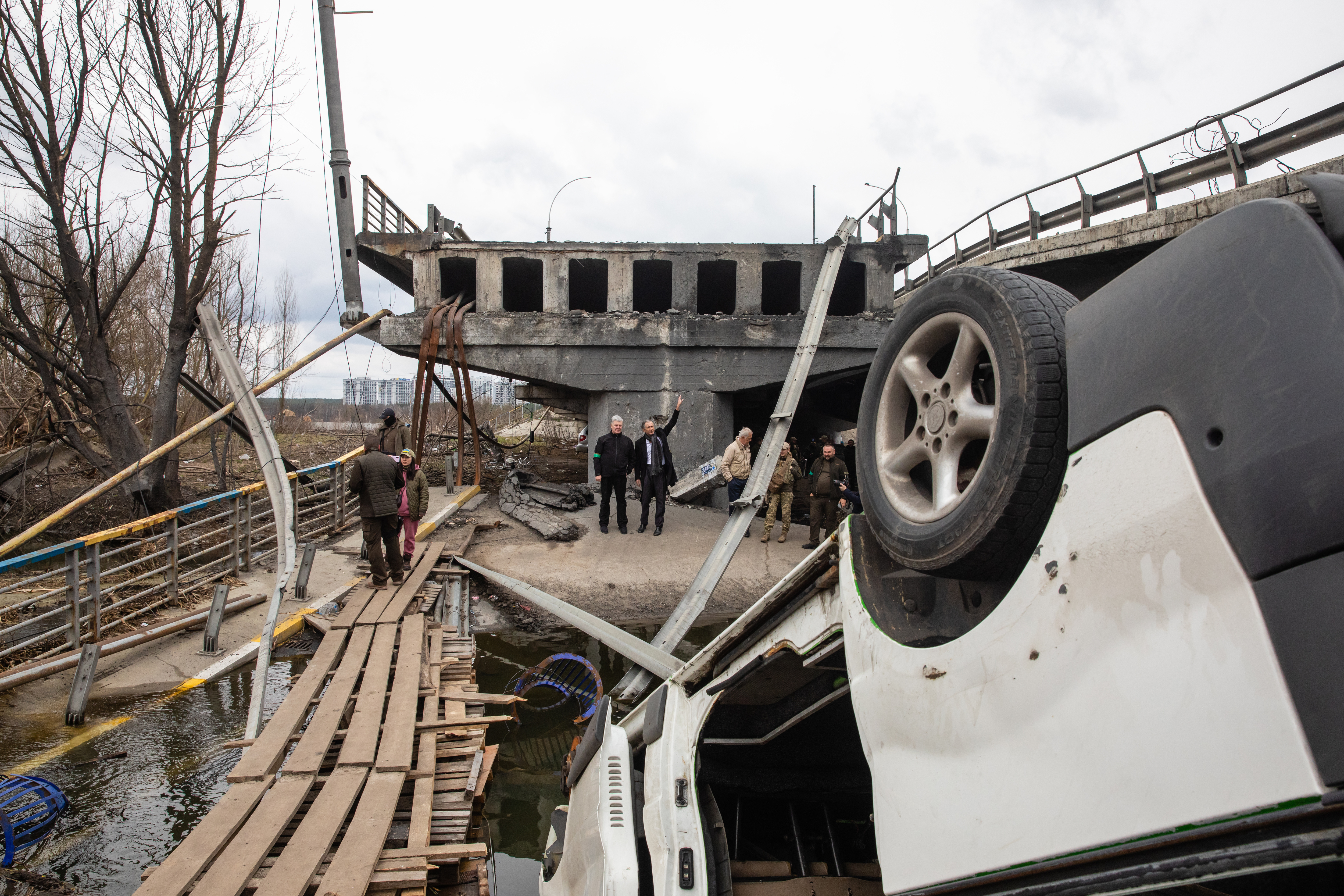 Biden: Russia War a ‘Genocide,' Trying to ‘Wipe Out' Ukraine

He also said work was continuing to clear tens of thousands of unexploded shells, mines and trip wires left behind in northern Ukraine by the departing Russians. He urged people returning to homes to be wary of any unfamiliar objects and report them to police.

Also Wednesday, a report commissioned by the Organization for Security and Cooperation in Europe found “clear patterns of (international humanitarian law) violations by the Russian forces in their conduct of hostilities.” It was written by experts selected by Ukraine and published by the Vienna-based organization, which promotes security and human rights.

The report said there were also violations by Ukraine, but concluded those committed by Russia “are by far larger in scale and nature.”

Ukraine has previously acknowledged that there could be “isolated incidents” of violations and said it would investigate.

Residents in Yahidne, a village near the northern city of Chernihiv, said Russian troops forced them to stay for almost a month in the basement of a school, allowing them outside only to go to the toilet, cook on open fires — and bury the dead in a mass grave.

In one of the rooms, they wrote a list of those who perished. It had 18 names.

“An old man died near me and then his wife died next,” Valentyna Saroyan said. “Then a man died who was lying there, then a woman sitting next to me. ... Another old man looked so healthy, he was doing exercises, but then he was sitting and fell. That was it.”

Russian President Vladimir Putin has denied his troops committed atrocities, saying Tuesday that Moscow “had no other choice” but to invade and would “continue until its full completion and the fulfillment of the tasks that have been set.” He insisted Russia’s campaign was going as planned despite a major withdrawal after its forces failed to take the capital and suffered significant losses.

Russian troops are now gearing up for a major offensive in the eastern Donbas region, where Moscow-allied separatists and Ukrainian forces have been fighting since 2014, and where Russia has recognized the separatists’ claims of independence.

A key piece of the Russian campaign is Mariupol, which lies in the Donbas and which the Russians have pummeled since nearly the start of the war.

It was unclear when a surrender may have occurred or how many forces were still defending Mariupol.

According to the BBC, Aiden Aslin, a British man fighting in the Ukrainian military in Mariupol, called his mother and a friend to say he and his comrades were out of food, ammunition and other supplies and would surrender.

Russian state television broadcast footage Wednesday that it said was from Mariupol showing dozens of men in camouflage walking with their hands up and carrying others on stretchers or in chair holds. One man held a white flag. In the background was a tall industrial building with its windows shattered and roof missing, identified by the broadcaster as the Iliich metalworks.

In a Twitter post, Zelenskyy adviser Oleksiy Arestovych did not comment on the surrender claim but said elements of the same brigade managed to link up with other Ukrainian forces in the city as a result of a “risky maneuver.”

Ukrainian officials have been investigating an allegation that a Russian drone dropped a poisonous substance on Mariupol.

— In the Odesa region, Gov. Maksym Marchenko said forces struck the guided-missile cruiser Moskva — the flagship of Russia’s Black Sea Fleet — with two missiles and caused “serious damage.” The Russian Defense Ministry confirmed the ship was damaged but not that it was hit by Ukraine — it said ammunition on board detonated as a result of a fire whose causes “were being established.” The entire crew was evacuated, it added.

— U.N. Secretary-General Antonio Guterres said there is no chance at the moment for a humanitarian cease-fire in Ukraine, as the world body was seeking.

— The detention of fugitive Ukrainian oligarch Viktor Medvedchuk, the former leader of a pro-Russian opposition party and a close associate of Putin, was being met with enthusiasm in Kyiv and irritation in Moscow. Analysts say Medvedchuk, detained Tuesday in an operation by Ukraine's state security service, could become a valuable pawn in Russia-Ukraine talks on ending the war. Zelenskyy has proposed that Moscow could win Medvedchuk’s freedom by releasing Ukrainians now held captive.