The boat, which did not look like pangas often used in human smuggling operations, likely blended in with other commercial boats as it made its way along San Diego's coast, officials said

An investigation was ongoing Monday into a suspected human smuggling operation after a 40-foot cabin cruiser capsized in rugged waters off the coast of San Diego, killing at least three people and injuring dozens, according to officials.

The U.S. Border Patrol said there is every indication to believe the boat was a smuggling vessel used to traffic migrants into the U.S. illegally but the investigation into where the boat came from and its path into U.S. waters was still ongoing.

The boat, which did not look like pangas often used in human smuggling operations, likely blended in with other commercial boats as it made its way along San Diego's coast, according to Jeff Stephenson, a supervising agent with U.S. Border Patrol. 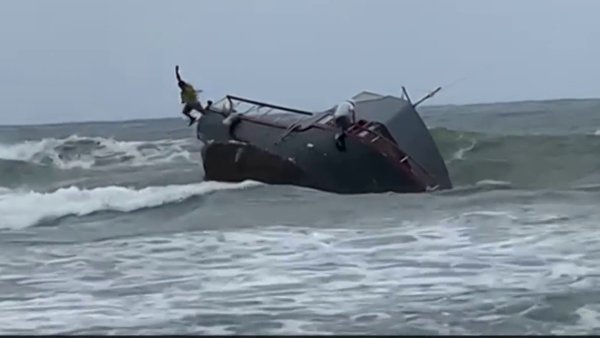 When the “severely overcrowded" boat approached the peninsula of Point Loma, near the Cabrillo National Monument and Point Loma Tide Pools, it lost control and overturned.

At least 32 people were on board the vessel, according to U.S. Customs and Border Protection.

Preliminary checks by the U.S. Border Patrol indicate 30 passengers were Mexican nationals, one was from Guatemala, and one -- identified as the captain of the boat -- was a male U.S. citizen. The captain was turned over to Immigration and Customs Enforcement (ICE) custody, CBP said.

Emma Ramirez witnessed the boat coming in and spoke with some of the survivors in Spanish. She said they told her that the boat departed from Mexico late Sunday night. At one point, the boat ran out of gas, they told Ramirez.

San Diego Lifeguard Lt. Rick Romero said the situation when they first arrived on scene was dire. Conditions were rough, with waves 5 to 6 feet in height.

“There are people in the water, drowning, getting sucked out the rip current there,” he said, adding that the boat, "had basically broken apart."

CBP confirmed the vessel broke apart after colliding with rocks inside the surf line.

Several people witnessed the crash from the shore, including State Assemblyman Chris Ward, who said he was "shaken" by the horrible tragedy and that it was traumatic to witness the violent capsizing and people pouring out into the ocean. He added that he was furious about the circumstances that forced these individuals to put themselves into harm’s way.

Seven people were pulled from the waves, including three who drowned, Romero said. One person was rescued from a cliff and at least 22 others managed to make it to shore on their own, he said.

On Monday, after calling off a search for more potential victims at about 7:15 a.m., the U.S. Coast Guard updated its count to show 32 people had been accounted for, with 29 people found alive and three declared dead either at the scene or local hospitals. One person remained in critical condition.

CBP said as of Monday evening, five victims were still in the hospital.

“We were putting more resources out in the water to interdict vessels like this and we announced it in advance to try to deter as much as we could to try and send a message to smugglers," Stephenson said.

The boat did not have a manifest so it was not at first clear everyone on board was accounted for, investigators said.

Warning: The video below may contain graphic imagery

Video shows a vessel overturned and broken apart that was carrying 30 people in a possible human smuggling operation, officials said.

"After careful consideration using the information from our on-scene crews, partner agency input and the magnitude of the response efforts, the Coast Guard suspended our search on Monday morning,” said Captain Timothy Barelli, the Sector San Diego commander."

The San Diego County Medical Examiner's Office reported two women, 35 and 41 years old, and one man of unknown age had died but did not release their names as their families have not yet been notified.

About 25 of them were men and eight were women, though the U.S. Coast Guard said counts may be off due to the chaotic scene of events.

Once the survivors are released from the hospital, they will be placed into the custody of immigration authorities, the Mexican consulate said.

"The Consulate is in direct contact with the victims and will assist them in their return to Mexico once their processes conclude, giving priority to people who, due to their health condition, present a higher state of vulnerability," the consulate said in a statement.

The agency is also working with the San Diego County Medical Examiner's Office to identify the three people who died and help get in touch with their families.

The person believed to be operating the boat -- and believed to be the suspected smuggler, according to agent Stephenson -- was being interviewed by USBP. Smugglers typically face federal charges and those being smuggled are usually deported.

The nationality of those on board has not been disclosed but the San Diego Mexican Consulate is currently in contact with officials involved in the investigation in case the victims are Mexican nationals.

Days earlier, USBP Chief Agent Aaron M. Heitke said the agency had recently seen an increase in the number of illegal crossings at sea and would be ramping up coastal patrols this weekend as a result.

On Thursday, border officials intercepted a panga-type vessel traveling without navigation lights 11 miles off the coast of Point Loma with 21 people on board. The crew took all 15 men and six women into custody. Agents determined all were Mexican citizens with no legal status to enter the U.S., according to a statement released by Customs and Border Protection. Two of the people on the boat, the suspected smugglers, will face charges, the agency said.

In March, 13 people were killed and 13 others were injured when an SUV suspected to be used for human smuggling collided with a semi-truck hauling gravel near the U.S.-Mexico Border in Imperial County east of San Diego County. It was one of the deadliest border-related crashes in U.S. history.