According to the National Weather Service, the forecast calls for east winds of 20 to 30 mph, with gusts reaching 55 mph, and some isolated gusts as high as 65 mph in "wind-favored" locations.

Gusting Santa Ana winds and dangerously dry conditions have returned to the region, prompting forecasters to issue a red flag warning of critical fire danger that will continue Friday.

The warning went into effect at 9 p.m. Wednesday and will be in place until 6 p.m. Friday for San Diego County mountains and inland valleys.

According to the National Weather Service, the forecast calls for east winds of 20 to 30 mph, with gusts reaching 55 mph, and some isolated gusts as high as 65 mph in "wind-favored" locations.

Humidity levels will fall to between 5% and 10%.

"Any fires that develop will likely spread rapidly," according to the NWS. "Outdoor burning is not recommended."

The winds are expected to diminish by the weekend, along with a gradual recovery in humidity.

As of 3:30 a.m. Friday, San Diego Gas & Electric had switched off power to 4,452 customers as part of a planned outage in response to the red flag warning. 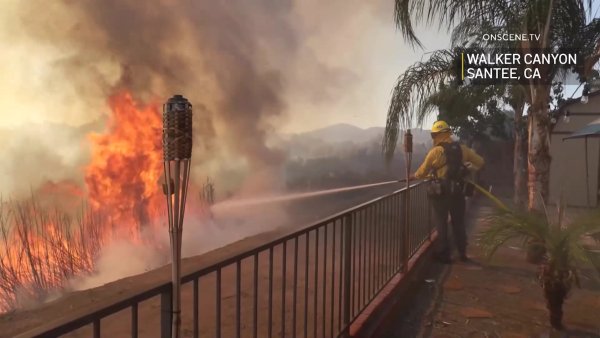 A small spot fire was reported Wednesday evening off Interstate 8 in Alpine. At 1:20 a.m. Friday, a brush fire burned off the northbound Escondido (15) Freeway at the interchange with the Martin Luther King Jr. (94) Freeway. A total of 32 firefighters were assigned, including one helicopter, officials said. No evacuations were ordered. No injuries were reported.

Capt. Frank Lococo of Cal Fire said the agency is prepared to respond, with five additional engines on loan from Northern California.

San Diego County government officials on Wednesday asked residents to stay alert for wildfires, and refrain from using power tools outdoors, including lawn mowers, as they can potentially spark on rocks and ignite grass or brush fires. Instead, residents should use hand tools to remove dead or dying plants near their homes.

The county also reminded residents to maintain defensible fire space around their homes and remove dead leaves, debris and other flammable items, such as wood piles, that are stacked against structures.

During a high-fire season, people should also: