Though some competition has already begun, the Tokyo Olympic Games officially, finally get underway Friday night with the Opening Ceremony.

The Olympic Stadium in Tokyo is hosting the first major global gathering since the global pandemic began last year and will see special performances, pageantry and the Parade of Athletes during the ceremony. Among the plans in store that will feature on the NBC broadcast: Leslie Odom Jr. will tell the story of the hopes and dreams of Olympians in an opening vignette, Dwayne Johnson will introduce Team USA, and Uma Thurman will narrate a special feature leading into the Parade of Athletes.

SEE MORE: How to watch the Opening Ceremony of the Tokyo Olympic Games

Stream LIVE on NBCOlympics.com and the NBC Sports app

Stream on NBCOlympics.com and the NBC Sports app

Follow along below as we take you through all the top moments of the Opening Ceremony, from staples like the lighting of the Olympic flame to the biggest spectacles and surprises.

The ceremony opens with a video featuring geometric shapes drawn on a blackboard in chalk, which gradually turn into the Olympic Stadium. The chalk art in the first half is a stop motion animation which took 10 days to film and involved repeatedly drawing and erasing approximately 400 images of solid objects on a single blackboard.

The final second of the countdown was a bird’s-eye view shot of the Olympic Stadium, which was then surrounded by fireworks for about 20 seconds.

Next, we see a lone female athlete silently running on a treadmill, who becomes surrounded by other lone athletes, all connected by light projections mean to represent an “invisible bond.” The lone running athlete is Arisa Tsubata, a middleweight boxer who is also a nurse and treated COVID-19 patients (Tsubata dreamt of qualifying for the Olympics but her plans were cut short when the last boxing qualifier was called off due to the pandemic).

In the final scene of the performance, dancers used pieces of elastic to represent bodily movements and a “web of emotions,” before the focus transitions back to Tsubata, again running alone. 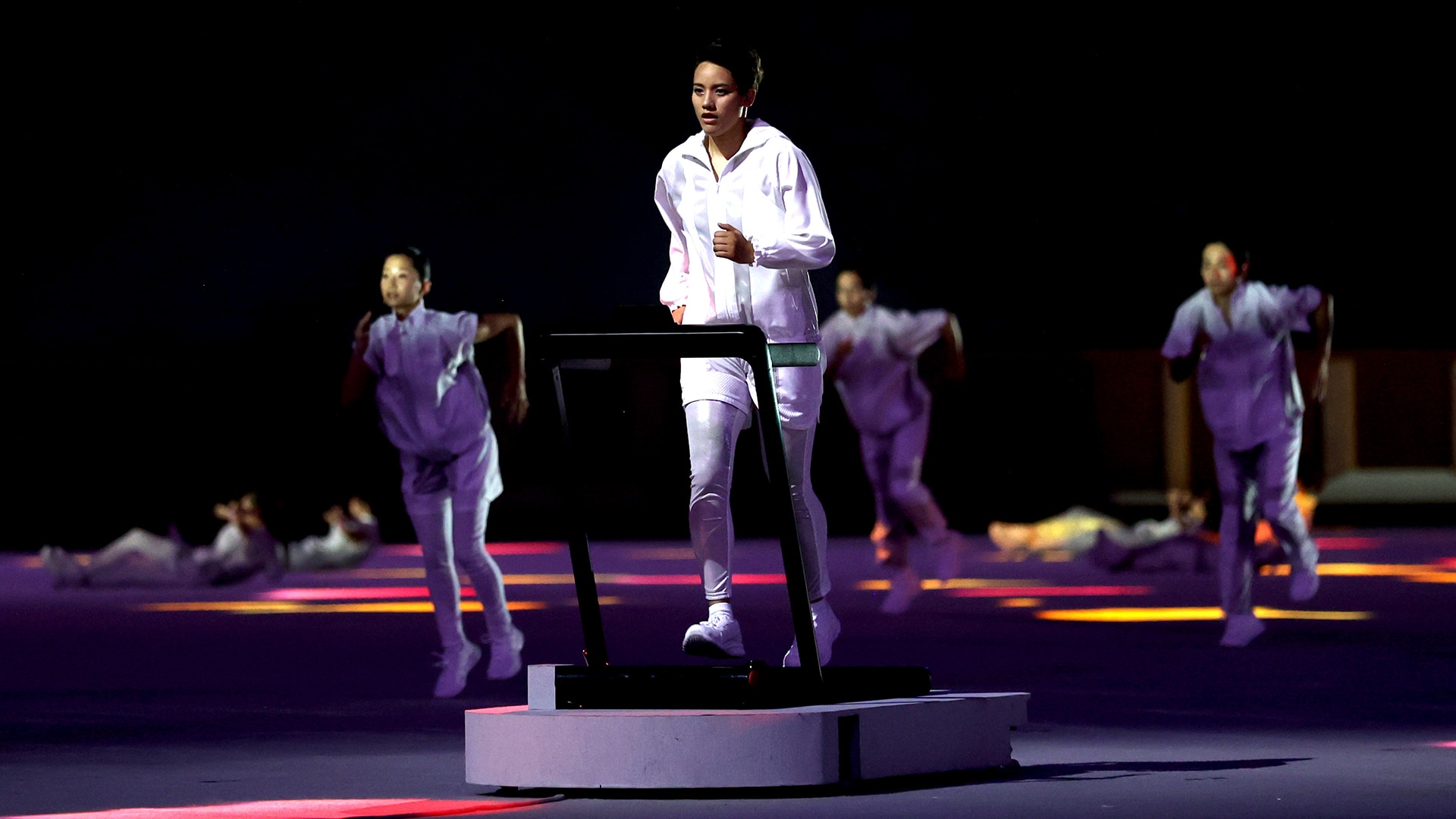 "The Rhythm of Tradition" Performance

The performance begins with the “Kiyari Uta,” a work song that's been sung since Japan's Edo period, performed by members of the Edo Firemanship Preservation Association. Dancers dressed as carpenters begin “woodworking” on large wood tables.

Giant wooden rings, four meters in diameter, are carried onto the stage and surrounded by large displays of paper lanterns. The rings are pulled together to form – gasp! – the Olympic Rings. The rings are made out of lumber from trees planted by athletes from each of the participating nations in the 1964 Tokyo Olympics.

For the 1964 Games, athletes from each participating nation brought seeds to Tokyo to be planted as commemorative trees, which were then distributed throughout Japan to areas where they could best grow. 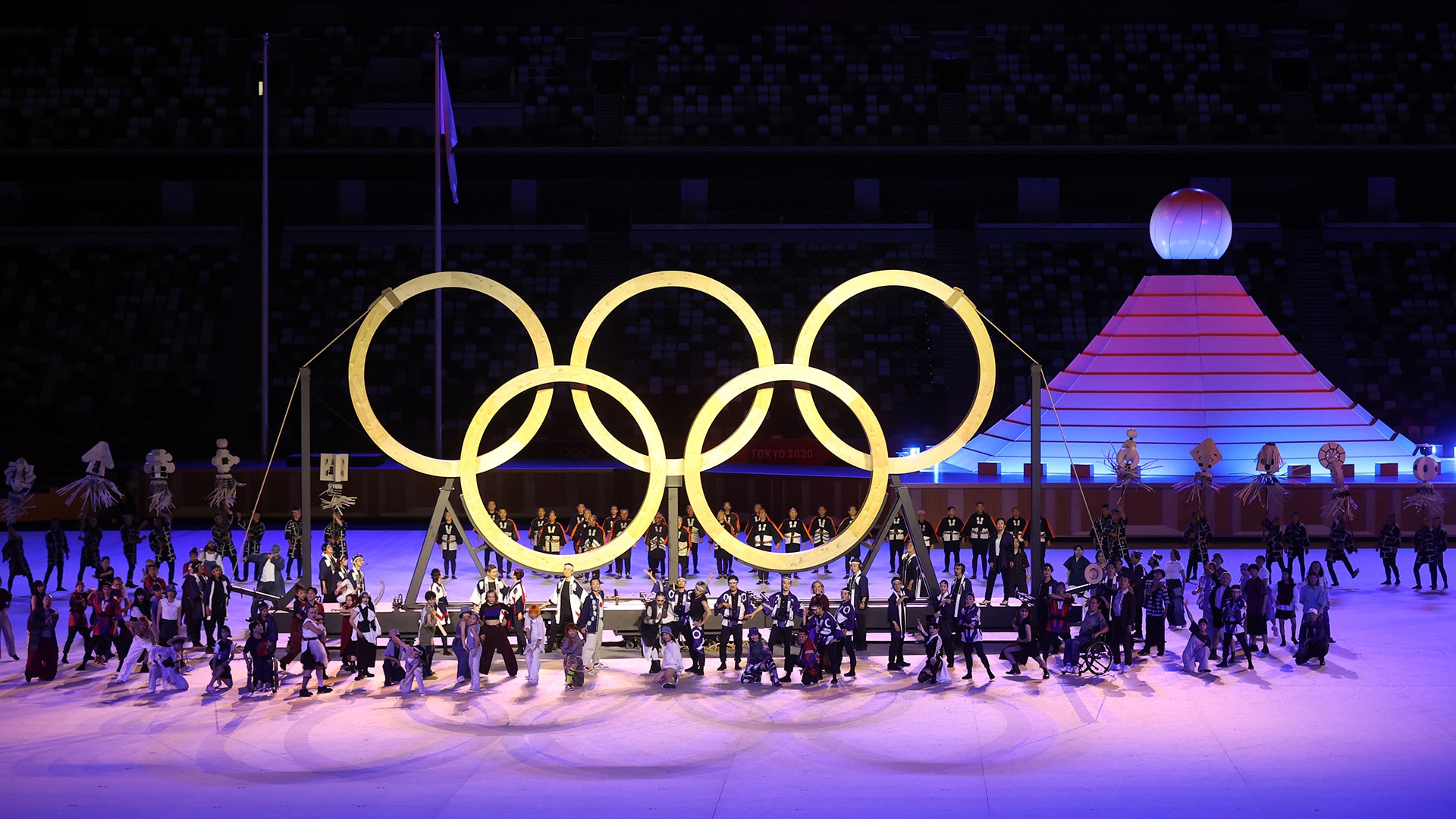 The Olympic rings are shown during the Tokyo Olympics Opening Ceremony.
Getty Images

Athletes are entering the stadium to songs from famous Japanese video games. The signs bearing nations’ names were meant to look like speech bubbles from manga comics. The entrance order is alphabetized in the host nation's language, with the host nation going last.

Greece led the way, followed by the refugee team.

For the first time ever, each nation has two flagbearers – a male and a female representative. That doesn’t mean two flags, however. Instead, the flagbearers are finding creative ways to share one flag pole.

The Argentinian delegation came through with what will almost definitely be the entrance of the night, jumping up and down in a coordinated mob as it moved onto the field.

There were reportedly around 200 American athletes marching in the parade out of the 600-plus scheduled to compete.

For these Olympics, athletes aren’t allowed to arrive until five days before competition, so many of the delegations were smaller than usual during the parade. Some athletes, including members of the U.S. women’s soccer team and the U.S. gymnastics team, also chose not to attend because they are competing soon after the ceremony.

Athletes from across all sports got to mingle, like swimming’s Simone Manuel and Katie Ledecky with NBA superstar Kevin Durant.

Lights shows are becoming a staple of Olympic opening ceremonies, and this year was no different. A fleet of 1,800 drones hovered above the Olympic Stadium to form a stunning three-dimensional version of the Tokyo 2020 logo and then a globe. A drone display is seen over the top of Olympic Stadium during the Opening Ceremony.
Getty Images

A slew of global music stars including John Legend and Keith Urban were included in a pre-recorded rendition of John Lennon and Yoko Ono’s popular song “Imagine,” often played or performed to symbolize world unity. A group of children on the field sang the opening lines of the song.

International Olympic President Thomas Bach addressed the crowd, stressing the unifying power of sports. He also thanked organizers, broadcasters and sponsors for persevering through challenges to put on the Games.

“Today is a moment of hope. Yes, it is very different from what all of us had imagined. But let us cherish this moment – finally, we are all here together,” he said.

Speaking to the athletes directly, Bach added: “You struggled, you persevered, you never gave up. And today, you’re making your Olympic dream come true. You are true Olympic athletes.”

Pantomime performers in full-body suits acted out the 50 pictograms that represent each Olympic sport, which were invented in 1964, the last time Tokyo hosted the Olympics. Dubbed “kinetic pictograms” as a modern update to the original icons, the live versions are also expected to be used in sport presentation videos screened inside the venues, during live coverage of each event, and as an element of other digital ventures. 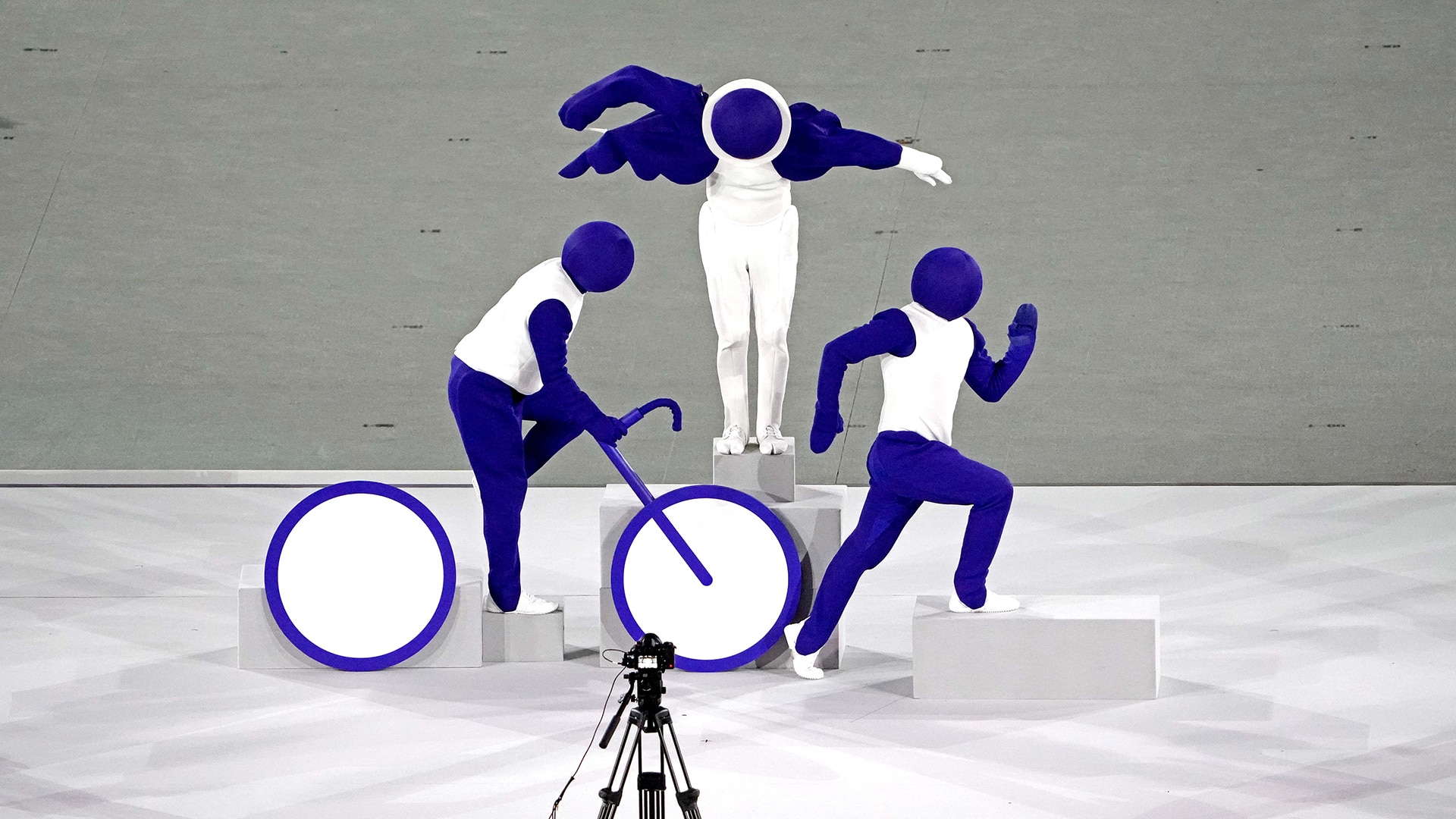 Performers make replicas of the 50 Olympic sports logos during the Opening Ceremony of the Tokyo Olympics.
Imagn

The final lap of the Olympic torch relay featured an array of former and current Japanese stars, as well as medical first responders.

Baseball greats Hideki Matsui, Sadaharu Oh and Shigeo Nagashima were among those who carried the torch toward the Olympic cauldron. The former baseball players passed it off to Hiroko Oohash and Junko Kitagawa, a doctor and a nurse.

Wakako Tsuchida, a seven-time Paralympic medalist, then took it in her wheelchair to a group of six students near the stage, who made the final handoff to four-time Grand Slam champion Naomi Osaka.

Osaka, who begins competition on Sunday, has represented Japan since she was 14 years old and is competing in her first Olympics. She was widely speculated to be the final leg of the relay after her first match, initially scheduled for Saturday, was pushed to Sunday at the request of Olympic organizers. 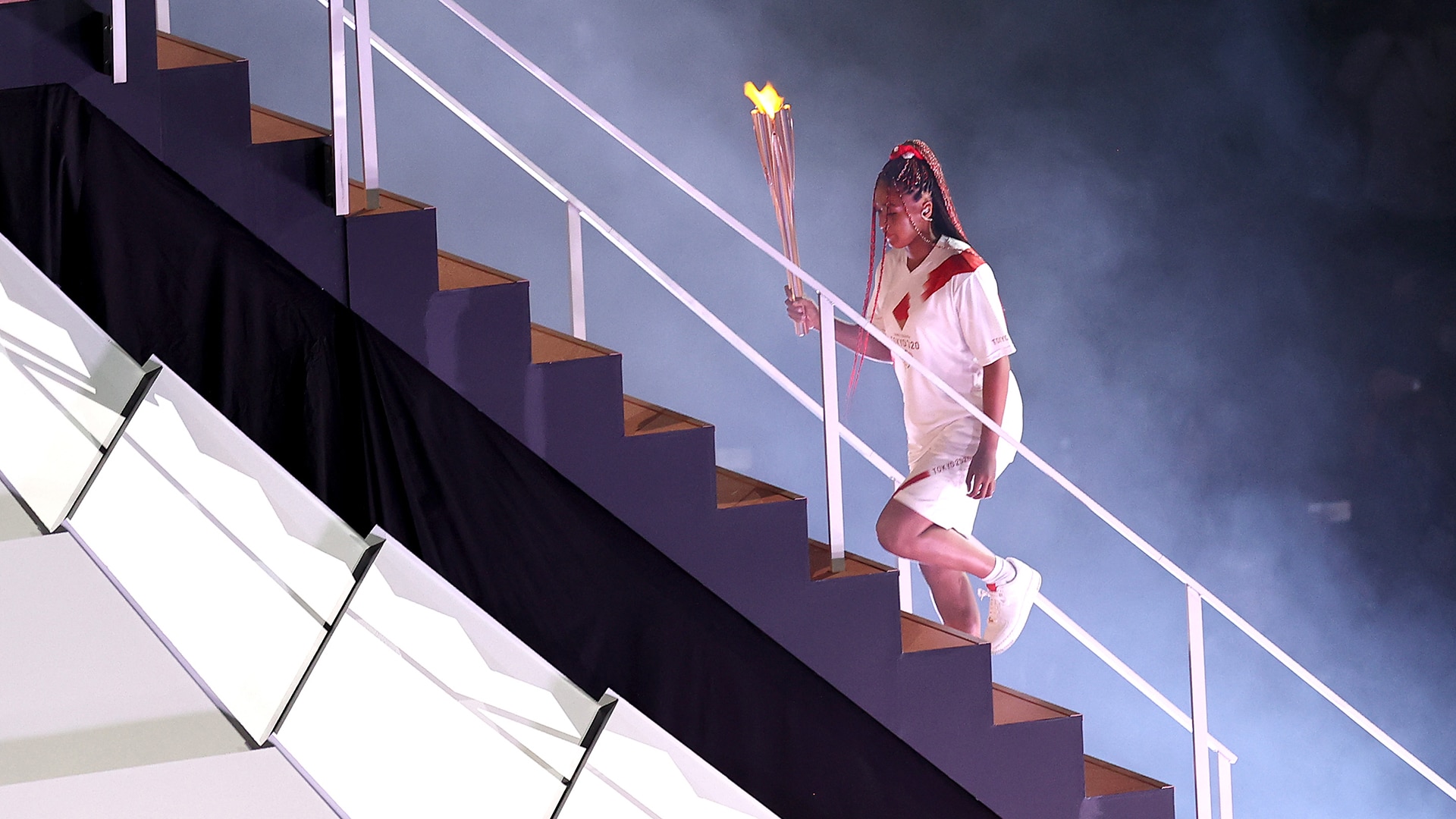 Naomi Osaka carries a torch to the cauldron inside Olympic Stadium before lighting the Olympic flame at the Opening Ceremony of the Tokyo Olympic Games.
Getty Images
Copyright NBC Olympics – Tokyo