Richard Leads Padres to Another Shutout

The San Diego Padres are in an unfamiliar position: For the first time since 1998, they lead the NL West heading into May.

Clayton Richard combined with three relievers to throw the club's major league-leading fifth shutout in a 3-0 win over the Milwaukee Brewers on Friday night.

Add in a late two-run homer by Scott Hairston to provide some breathing room, and San Diego is riding high. 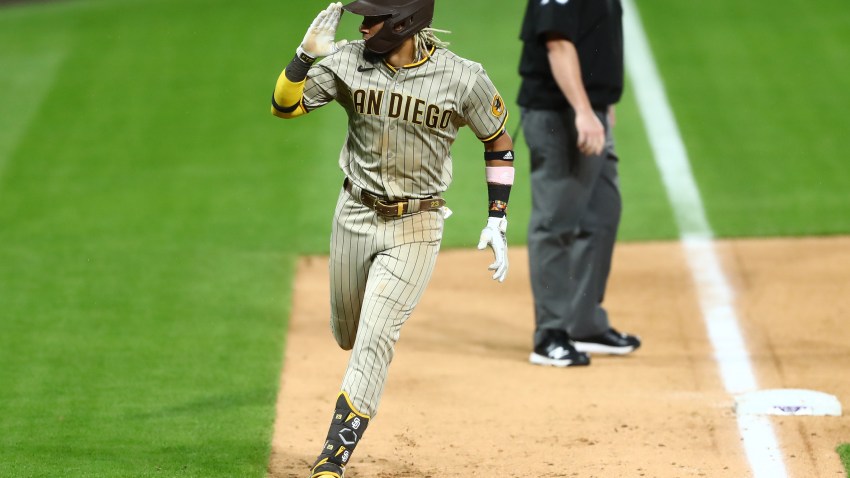 "We're not putting a lot of pressure on ourselves," Hairston said. "We feel like we are a really good team."

The Padres are playing that way. They won for the 12th time in 14 games and increased their home winning streak to eight in a row.

San Diego (15-8) has its best record entering May since the 1998 team also was in first place en route to winning the NL pennant. The Padres are tied with St. Louis for the league's best record.

"I think our thinking daily is for us to go out and play solid baseball," manager Bud Black said. "If we do that, we have a chance to win."

One area that has been rock solid is San Diego's pitching. The staff ran its scoreless streak to 24 innings. In the last 14 games, the Padres' ERA is 2.23 with 121 strikeouts and 42 walks in 125 innings.

"We have been pitching well as a unit and I think it's contagious," Richard said. "You don't want to be the guy to screw it up."

Luke Gregerson, Mike Adams and Heath Bell each pitched one inning to complete the six-hitter. Bell earned his seventh save in eight opportunities.

"We have so much confidence in those guys in the 'pen," Richard said.

Milwaukee, blanked 9-0 Thursday night in the series opener, has failed to score in 22 straight innings. The Brewers, who have lost seven of eight, came into the series having scored more runs than any other NL team.

"It's only two games, but they've been putting it to us a little bit," Corey Hart said.

Hairston, who entered in the seventh as part of a double switch, homered with one out in the bottom half off Dave Bush (1-2) after his brother, Jerry, reached on a leadoff double.

"I'm trying to drive the ball and just looking for a ball that's up," Hairston said of his homer, which hit the brick Western Metal Supply Co. building near the left-field foul pole.

"It was not particularly well-located," he said. "But given the situation, it was not a very good choice, either. I tried to throw a fastball in and I really shouldn't have."

Four of the Padres' eight straight home wins have been shutouts, and they have outscored opponents 37-10. San Diego's 9-2 home record is the best in the National League.

"Once they get into the bullpen and they get those three guys out there, it's tough," Brewers manager Ken Macha said.

Bush allowed three runs and six hits over seven innings. He walked four and struck out three. Bush has allowed seven homers, tied for the most in the NL.

The right-hander was coming off one of his worst outings when he gave up a career-high nine runs and 10 hits, including four homers, in 3 2-3 innings of a 12-2 loss at home to the Chicago Cubs on Sunday.

Chase Headley gave the Padres a 1-0 lead with a sacrifice fly in the third.