Occasionally FanHouse's resident referee will chime in with thoughts on major topics relating to officiating. We call it The Zebra Report.

I guess I should first introduce myself, considering I'm under the moniker of "FanHouse's resident referee." I have been a football official for the past ten years ... or since I was 20. I've been a certified professional high school official for the past eight years, and have had the pleasure of working several high-profile games, including ones with nationally ranked teams.

I'm also not stupid. I realize the NFL officials are much better and more experienced than I am ... and this puts me in the minority, apparently, when it comes to fans of the NFL. Over the early weeks of the NFL season, I've seen nothing but whining about the officiating and talk of how embarrassing it has become. This is usually done by someone that knows nothing about the rules, and/or has obvious bias. Most arguments are flawed, lacking a grasp of the real rules, and the spirit of said rules.

This is why I have decided to initiate this column. We'll run it as often as controversial calls occur. While I am less qualified than the NFL officials, I'm not hampered by bias or a "CYA" mentality like the NFL league office. I will call it as a I see it. 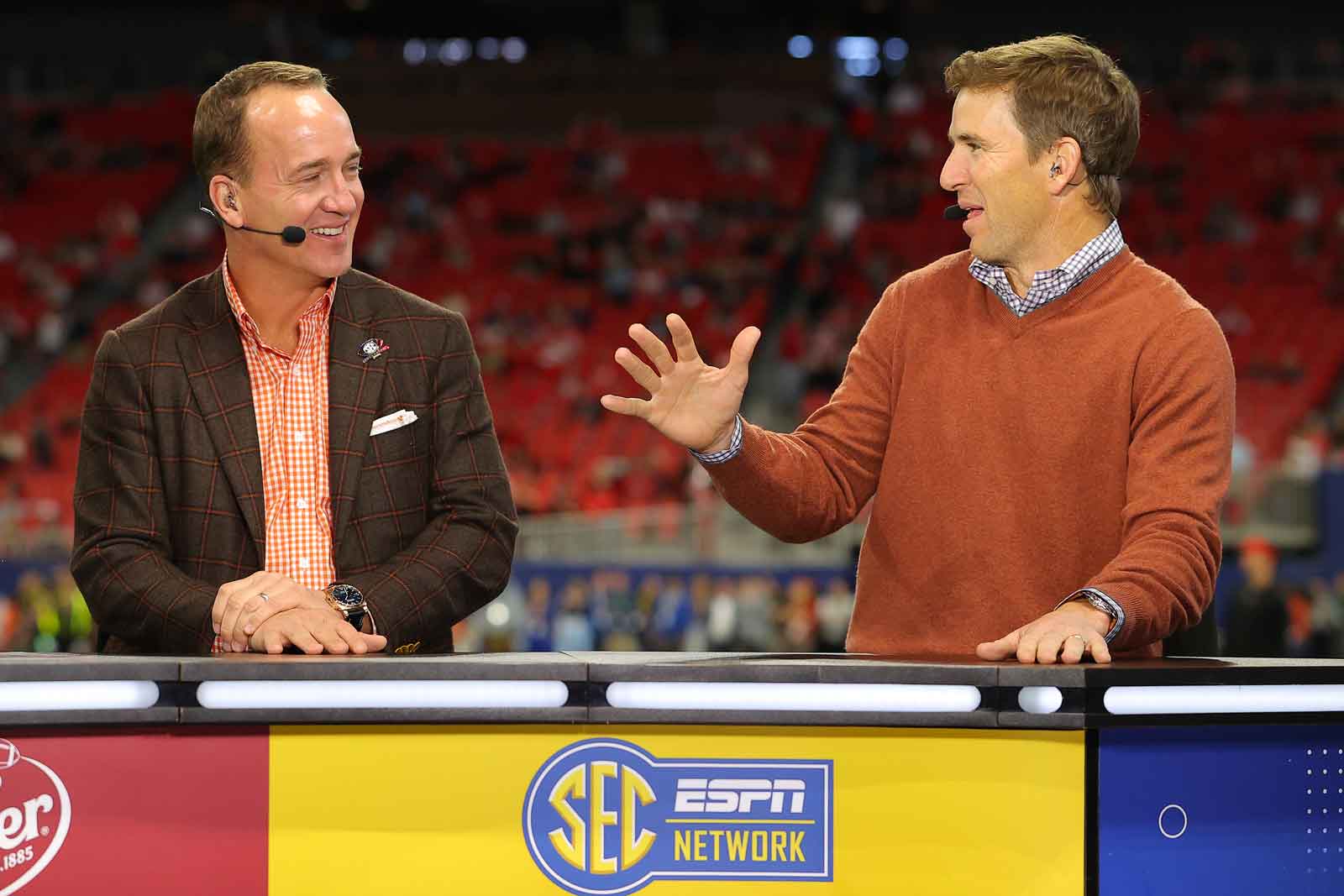 Manning Brothers Will Face Off as Coaches at Pro Bowl Games

There are four incidents in particular we'll review today. Check them out after the jump.

Incident One: Hochuli's Inadvertent Whistle
Using any other title to this would be misleading, and that's what the majority of the people are failing to grasp with this issue. The only mistake Ed Hochuli made was blowing his whistle ... and it should never, ever happen like it did. It should especially never happen in the NFL where they have a built in bail-out, which is Instant Replay. It would be more defensible -- but not really defensible -- in high school. Even if Hochuli thought Jay Cutler's arm was going forward at the time the ball came loose -- which it clearly wasn't -- the ball went backwards. A backwards pass is a lateral, which is a live ball. Once he blew the whistle, however, the play had to end. It always does. There is no way to review what "would have happened" after a whistle blew because the play has now been tampered with. The NFL's statement that they'll review the rule is grandstanding. They can't and won't change the inadvertent whistle rule. The answer is for officials to never do this.

As I alluded to earlier, everything done after the whistle was correct from Hochuli's perspective. He moved the ball back to where he blew the whistle, an admission that it was not an incomplete pass. He flat-out told Norv Turner that he screwed up, which means he's owning his mistake. He even sat there and answered hundreds of emails the next week from fans destroying him for an error. He's accountable.

Let's have a little perspective here, please. Officials never want to determine a game. You know what we want? Two things: 1. No injuries; 2. No unfair advantage gained by one side via a rules violation. That's the only agenda officiating crews take into games. I am not overstating this one bit when I say that Ed Hochuli, more than any other person on this planet, wanted the Chargers to stop the Broncos after that blown call. I guarantee it. He'd never say that, because he can't. It wouldn't follow in line with the integrity of an official, but deep down inside his brain was a loud cry for the Chargers to hold strong. There's no way he wanted that game to turn on his mistake, because his conscience is now saddled with it for the rest of his career.

The aftermath was ugly, and, frankly, personally embarrassing as an NFL football fan. To the people that leaked Hochuli's contact information, you are despicable. To put a man at risk of physical harm whom you have never met over the outcome of a Week 2 football game is flat-out pitiful. Shame on you. He made a mistake. Everyone makes mistakes at their job. What if you messed up something in your job and felt so bad about it that you couldn't sleep for days? Imagine that, and then imagine thousands of people reminding you how much you suck and claiming you, in fact, wanted the mistake to happen for one reason or another. Seriously, people who were emailing him, get a life.

As I said, he made a mistake. Unlike most people in this world, he owned up to the mistake immediately and apologized as profusely as he could. He's a better man than most for that.

Incident Two: No Defensive Pass Interference Call on Eventual Jags' Pick-Six
This was an egregious oversight by both the deep wing official and the back judge. There are no two ways to slice this.

You have seven officials watching 22 of the best athletes on the planet on any given play. Do the math, and things are going to get missed ... off the ball. There are always two sets of eyes on the ball at the very least, and it is unacceptable to allow such a blatant violation to go unflagged. An advantage was gained, and it was because of a rules violation. Should be a flag every single time, and the Colts got jobbed on this one.

Would he have caught it? We'll never know, because Keiaho was in his way. He impeded the progress of Williams to catch the football. A few things could have been done to avoid an infraction on this play. First of all, Keiaho could have seen the ball and made a play on it. In that case, had Williams run into him, you'd likely have offensive pass interference. The second thing Keiaho could have done was seen Williams and avoided contact.

I keep hearing Colts fans come up with scenarios, like, "we should just have Reggie Wayne run right into a linebacker and throw the ball there to get interference every time." Well, good luck with that. First of all, you have to count on the linebacker not seeing Wayne and neglecting to play the football. Second of all, Wayne had better be watching the ball and not the linebacker he intends to "accidentally" hit.

Imagine this scenario, instead, Colts fans ... what if Wayne was running a deep route, and Peyton Manning launched the ball. While the ball is at its apex, a safety is just standing stationary because his man is easily blanketed in the flats. He's not paying attention to the ball like he should be. As Wayne sprints after the ball, his eyes are firmly on the ball in the air, when all of a sudden, BOOM! Collision. The ball flies a good 20 yards past the hit, and we'll never know what might have been. Wayne ran into a defensive player who didn't know where the ball was or where Wayne was. Are you fans honestly suggesting that it should not be pass interference because the defender "has a right to be on the field" and the "offensive player ran into the defensive player?" C'mon. You don't even need the rule on this one. Just use common sense.

The Bears this week are talking about sending the tape to the league office and demanding action against Trueblood, as well they should. With the technology at their disposal, the players should realize that this stuff is going to be caught on tape and allow cooler heads to prevail. Let the play end, get the win, and send the tape the league office for them to sort it out. Taking matters into your hands, while noble in light of defending a teammate, can really cost your team. It did Sunday for Peanut and his Bears.

I understand the emotional aspect of it being tough to hold yourself back ... after all, I once distinguished myself with three penalties of similar nature my senior year of high school. That doesn't justify it. Restraint is the key word here.

Until next time ... please remember to never get personal with officials. We are real people that don't like making mistakes. We have no agenda other than a fair and safe game. We do understand, however, that getting booed is part of the gig, and it actually spices things up a bit. Feel free to exercise that right ... and I know you will.

Finally, you don't have to have been a former player to be a quality official. I've done games with some former players that were awful officials, and done many games with great officials that never played a snap. It doesn't make a difference at all.

Have an officiating question or want to submit an incident for review? It doesn't only have to be NFL ... if you see something on a Friday night or even in an elementary game, send it along to the NFL mailbag and Matt Snyder will answer it in his next Zebra Report.