RNC Night 4: Trump Warns His Opponent Will Dismantle America as We Know It

The 2020 RNC came to a close on Thursday

The Republican National Convention came to a close on Thursday, culminating with a nomination acceptance speech from President Donald Trump on the White House South Lawn.

He warned that America's greatness was endangered like never before by violent anarchists and agitators and a radical Democratic opponent who will destroy the American way of life. 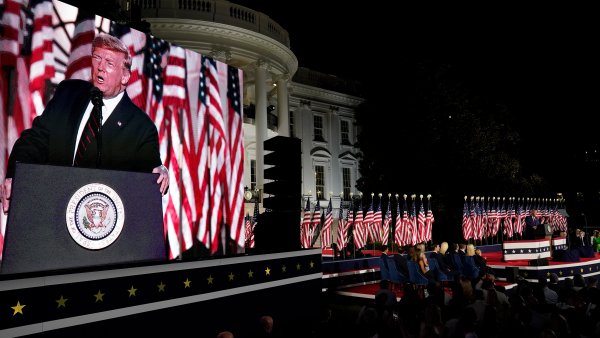 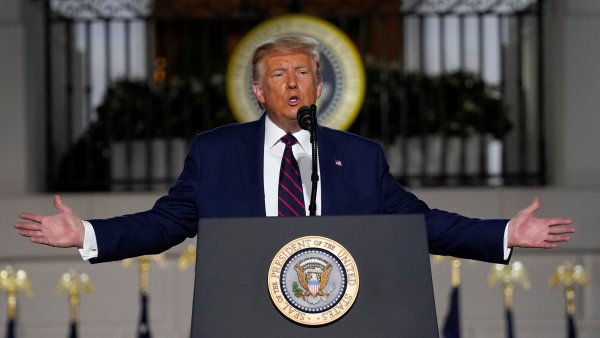 Here are some of the takeaways from the closing night of the 2020 RNC.

President Trump made his case for another four years in the White House Thursday by blaming China for the devastating destruction the coronavirus pandemic has brought to the United States, assailing his moderate Democratic opponent, former Vice President Joe Biden, as a radical, giving a brief list of second term goals and warning of dark days ahead if voters don’t return him to office.

"This election will decide whether we save the American dream, or whether we allow a socialist agenda to demolish our cherished destiny," he said.

In November, he said, the choice would be between rapidly creating millions of high paying jobs or sending those jobs overseas, between protecting law abiding Americans or giving free reign to violent anarchists, agitators and criminals.

"And this election will decide whether we will defend the American way of life, or whether we allow a radical movement to completely dismantle and destroy it," he said.

Trump incorporated the major and sometimes contradictory themes of the convention in his speech, insisting his four years had been a success while pledging to quickly rebuild an economy devastated by the pandemic.

The president repeated a number of disproven claims about his administration’s response to the pandemic, which has killed more than 180,000 people in the United States and is far from under control.

Calling the coronavirus the "China virus," he claimed a strong federal response when the message from the White House has often been inconsistent and ineffective. Hospitals in cities hard hit early in the pandemic, such as New York, were left with severe personal protective equipment shortages and the president promoted unproven remedies from the White House.

Furthermore, Trump has only rarely worn a mask in public, and his audience on the South Lawn of the White House Thursday night was mostly without masks and seated closely together.

Trump's referred at one point to the White House as the "People’s House," which highlighted the criticism he has gotten for using it as the backdrop for a partisan speech. As he spoke, demonstrators took to the streets in Washington, D.C., but were kept far away.

Trump’s speech was an hour and 10 minutes, second in length only to his own 2016 speech, the longest in modern history. The next longest was President Bill Clinton’s in 1996.

Trump tried to paint Biden as a radical for being willing to shut down the economy if necessary to stop the pandemic -- a step Biden said he would take if scientists recommended it.

"His shutdown would inflict unthinkable and lasting harm on our nation's children, families, and citizens of all backgrounds," Trump said. "The cost of the Biden shutdown would be measured in increased drug overdoses, depression, alcohol addiction, suicides, heart attacks, economic devastation and more. Joe Biden's plan is not a solution to the virus, but rather a surrender."

He accused Biden of pledging a $4 trillion tax hike, a misrepresentation of Biden’s position. Biden has said he would raise $4 trillion in new taxes but by targeting high earners.

Trump as Safekeeper of the Suburbs

President Trump appeared to continue to make a play for suburban voters with his law-and-order message, vilifying protesters as dangerous mobs intent on bringing down the president and warning that Democratic nominee Joe Biden would even destroy the suburbs.

Throughout the nominating convention, Republicans have tried to blame Democrats for racial unrest that has broken out across the country over the killing of mostly Black men.

"If the left gains power, they will demolish the suburbs, confiscate your guns, and appoint justices who will wipe away your Second Amendment and other Constitutional freedoms," Trump said.

Joe Biden is a Trojan horse for socialism, Trump said.

Former New York City Mayor Rudy Giuliani said that the Black Lives Matter movement and ANTIFA, or anti-fascists, "sprang into action" to prevent any action to curb police brutality after George Floyd died when a Minneapolis police officer knelt on his neck.

"And in a flash, they hijacked a peaceful protest into vicious brutal riots," said Giuliani, now Trump’s personal attorney. "Soon protests turned into riots in many other American cities, almost all Democrat. Businesses were burned and crushed. People beaten, shot, and killed. Police officers routinely assaulted, badly beaten, and occasionally murdered. And the police handcuffed by progressive Democrat mayors from doing anything but observe the crimes and absorb the blows."

Giuliani said that a vote for the Democratic presidential candidate Joe Biden created the risk that "you will bring this lawlessness to your city, to your town, to your suburb."

Reaching Out to Black Voters

While Trump avoided directly mentioning Black Lives Matter or naming any of the Black men and women killed by police, there were still signs that he hoped to appeal to Black voters.

In his convention speech, Ja’Ron Smith said that he wishes everyone else could see the "deep empathy" Trump shows families whose loved ones were taken by senseless violence.

An assistant to the president for domestic policy, Smith helped craft an executive order that Trump recently issued to address changes to policing that have been demanded in the wake of Floyd’s killing in May by a white Minneapolis police officer.

And Secretary of Housing and Urban Development Ben Carson's speech stood out for his direct acknowledgment of the shooting of Jacob Blake in Kenosha, Wisconsin, by police on Sunday.

Carson, the highest-ranking Black American serving in the Trump administration, delivered his remarks to the convention in a prerecorded video. "I’d like to say that our hearts go out to the Blake family," Carson said. "The images everyone has seen from this tragic event in Kenosha are heart-wrenching. This action deserves a serene response, one that steers away from the destruction of a community that molded Jacob and his family into the kind of man his family and friends know today."

Authorities say Blake was shot in the back by police responding to a domestic dispute. The 29-year-old Black father of six is now paralyzed from the waist down.

Carson’s comments come as the Trump convention has focused on amplifying his "law and order" message against violence and protests.

As basketball and baseball players are protesting police brutality by refusing to play their games, the president of the Ultimate Fighting Championship, Dana White, was defending the police and the president.

White praised police and other law enforcement officers for putting themselves at risk when things are at their worst.

"That is certainly been the case during this ongoing pandemic," White said. "Come on, America, defunding these vital positions is not the answer. The first responders have always taken care of us. And now, more than ever, we need to take care of them."

White credited Trump for helping to figure out how to stage live professional sporting events in the middle of the pandemic, including the mixed martial arts of the UFC.

"President Trump recognized that one of the small ways to instill a sense of normalcy in people's lives, was to bring back entertainment options," he said.

White’s comments were at odds with what many athletes have been doing over the last few days. The Milwaukee Bucks, and then other teams from NBA did not play on Wednesday to protest racial injustice.

Before White spoke, the New York Mets and the Miami Marlins declined to play, standing for 42 seconds of silence – in honor of #42 Jackie Robinson -- then leaving the field with only a Black Lives Matter t-shirt on home plate.

At the RNC, Dana White talked about how UFC paved the way for sports to return during the Coronavirus pandemic. Watch his full speech.

As President Trump addressed the Republican’s nominating committee Thursday night, wildfires burned in California and Louisiana was grappling with the damage caused by Hurricane Laura, one the most powerful storms to hit the Gulf Coast in decades. It destroyed buildings in downtown Lake Charles, even toppled a Confederate statue that officials had voted to keep.

"They want to ramp up the job-killing regulations," Larry Kudlow, the director of the National Economic Council, said on Tuesday night. "They want to decimate the American energy renaissance that we’ve experienced these last four years."

Trump is withdrawing the United States from the Paris agreement on mitigating climate change. He has eliminated or weakened approximately 100 environmental regulations that the Obama administration put in place and that Biden likely would reinstate.

Biden wants 100% clean energy and net zero emissions by 2050. He would ban new oil and gas permits on public lands.

In California, where firefighters are making progress, 1.6 million acres have burned. Officials worry that the fires and Hurricane Laura will help to spread the coronavirus.