Chinese authorities took control of the former U.S. Consulate in Chengdu on Monday after it was ordered closed in retaliation for a U.S. order to vacate the Chinese Consulate in Houston

In the more than 40 years since China and the U.S. established formal diplomatic relations, accusations have been traded, tensions have risen and fallen and the two sides have come dangerously close to outright confrontation.

Yet the forced closure of the Chinese Consulate in Houston and China’s order in response to shutter the U.S. Consulate in the Chinese city of Chengdu mark a new low point in ties between the world’s largest economies that can’t easily be smoothed over.

Mistrust and rancor surrounding disputes over alleged technology theft, national security, human rights, Hong Kong, Taiwan and the South China Sea are now the main drivers in a relationship that had long sought to compartmentalize such issues to prevent them from impeding trade ties and cooperation in managing issues such as North Korea's nuclear program and conflicts in the Middle East and Africa.

Going forward, the prospects for reconciliation look dim, even if the U.S. elects a new administration in November.

Chinese authorities took control of the former U.S. Consulate in Chengdu, the capital of Sichuan province, on Monday after it was ordered closed in retaliation for a U.S. order to vacate the Chinese Consulate in Houston.

A State Department statement expressed disappointment, saying the consulate "has stood at the center of our relations with the people in Western China, including Tibet, for 35 years."

"We are disappointed by the Chinese Communist Party’s decision and will strive to continue our outreach to the people in this important region through our other posts in China," it said.

China’s foreign ministry issued a brief notice saying "competent authorities" entered through the front entrance and took over the premises after U.S. diplomats closed it at 10 a.m. Prior to that, the flag was lowered and workmen began removing plaques and other signs of U.S. sovereignty on the compound's exterior.

That conveyed a sense of permanent rupture not felt during previous crises, including the 1999 stoning of the U.S. Embassy in response to NATO bombing of the Chinese Embassy in Serbia, along with the 2001 collision between a U.S. surveillance plane and Chinese fighter jet over the South China Sea. 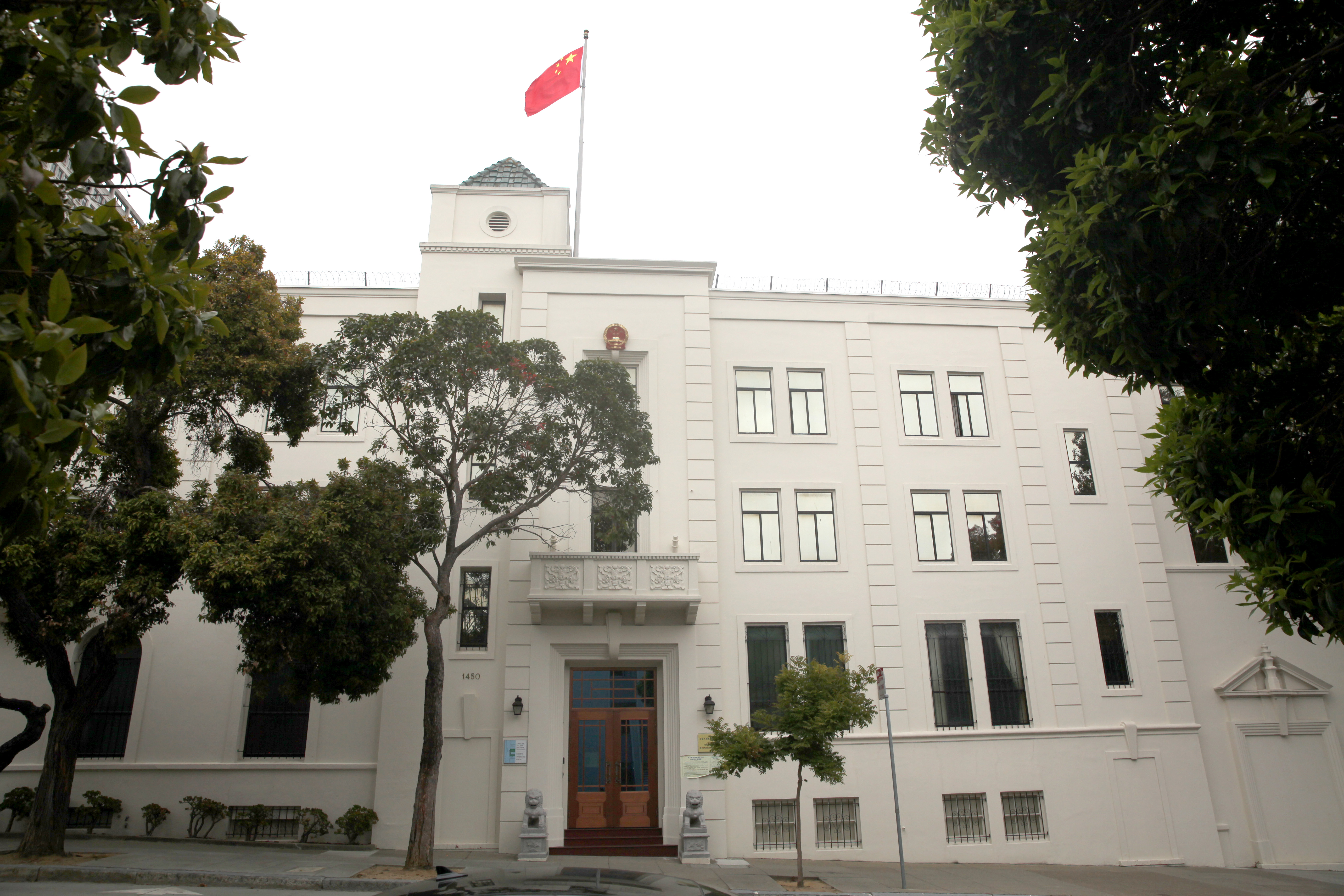 Chinese Researcher Charged With US Visa Fraud Is in Custody 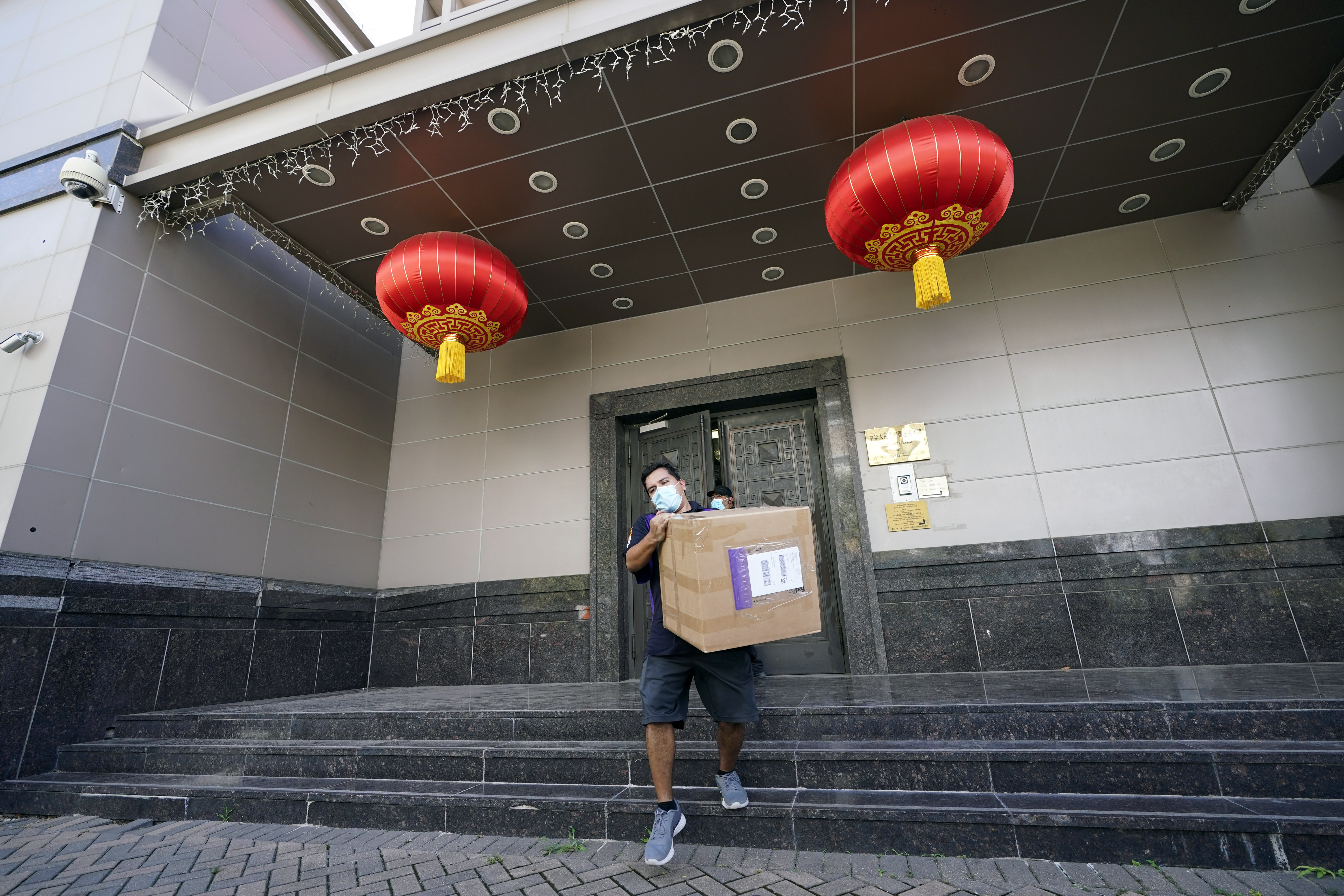 China Orders US to Close Consulate in Chengdu as Tensions Rise

A day earlier, China's foreign ministry issued a statement of protest over what it called intrusions into the Houston consulate that violated the Vienna Convention on Consular Relations and the China-U.S. Consular Convention.

"The Chinese side deplores and firmly opposes the U.S. move of forcibly entering China’s Consulate General in Houston and has lodged solemn representations. China will make legitimate and necessary reactions," the statement said.

China maintains consulates in San Francisco, Los Angeles, Chicago and New York in addition to its embassy in Washington.

The U.S. has four other consulates in China and an embassy in Beijing, keeping the sides in parity in terms of diplomatic missions.

On Monday, pro-China protesters were escorted away from the shuttered consulate as workers covered over the building’s exterior signs.

Another briefly flashed a shirt reading "SLING OUT USA!" in English before being taken away.

Others expressed regret at the closure. An officer removed a bouquet of flowers that a woman had left at the curb across from the entrance to the consulate.

Foreign ministry spokesperson Wang Wenbin told reporters at a daily briefing Monday that the shutdown was a "legitimate and necessary response to the unreasonable act" of the closure of the Houston consulate and the entry of U.S. authorities into it.

"We urge the U.S. to immediately correct its mistakes and create necessary conditions for the relationship between the two countries to return to the normal track," Wang said.

Tensions between the world's two largest economies ratcheted up Friday as China ordered the U.S. consulate in Chengdu to close. The move comes after the U.S. ordered the closure of the Chinese consulate in Houston this week.

The Chengdu consulate briefly came to prominence when the police chief of the nearby city of Chongqing fled there in 2012, precipitating the downfall of Chongqing's politically ambitious leader Bo Xilai in China's biggest political scandal in decades. It also played host to former Vice President Joe Biden during a visit when the current prospective Democratic Party presidential candidate was accompanied by China's now-leader Xi Jinping.

Police closed off a two- to three-block area around the consulate on Monday morning, cutting off virtually any view of the property including the flag. A few vehicles were allowed through after police checks, and others could be seen moving in the distance.

Officers kept a close watch, even after re-opening the area in the afternoon, determined to prevent any sign of unrest.

They took away a man wearing an anti-USA T-shirt after he held up and waved a short statement written in red on white paper. Later, an officer removed a bouquet of flowers that a woman had left at curbside, across from the entrance to the closed consulate.

Workers covered up the consulate signs on the wall outside shortly after the property was vacated. They included a bronze plaque near the entrance that a worker had tried to pry off the previous night, but without success.

The impending closure of the consulate drew a steady stream of onlookers over the weekend as Chengdu, like Houston, found itself in the limelight of international politics.

People stopped to take selfies and photos, some waving Chinese flags in a show of patriotism and others just capturing the moment. A man who tried to unfurl a large placard late Sunday that he called an open letter to the Chinese government was quickly escorted away.

The U.S. alleged that the Houston consulate was a nest of Chinese spies who tried to steal data from facilities in Texas, including the Texas A&M medical system and the University of Texas MD Anderson Cancer Center in Houston. China said the allegations were "malicious slander."