The latest news on the 2020 California primaries and the 2020 presidential election.
South Carolina Debate

What to look for in Tuesday's Democratic debate in South Carolina

Seven Democratic presidential hopefuls face off Tuesday night in South Carolina for the 10th Democratic debate. Five questions ahead of that forum:

HOW DOES SANDERS HANDLE ATTACKS?

Vermont Sen. Bernie Sanders is winning because his strong base has stayed with him as the other candidates split the remaining votes. His victory in Nevada gave him clear front-runner status and set off alarm among those in the party who see him as too liberal to defeat President Donald Trump.

Sanders' rivals have mainly trained their fire on each other — and, in last week's debate at former New York Mayor Mike Bloomberg during his first time on stage. There's been tremendous pressure in the past week for the candidates to start going after Sanders. They've been more aggressive on the stump, but will they follow through on the debate stage and, if so, how will Sanders handle it?

Sen. Bernie Sanders, I-Vt., won the Nevada Democratic caucuses in a runaway victory on Saturday. The second- and third-place winners have not yet been announced.

DOES BLOOMBERG REMAIN A TARGET?

The other candidates on the debate stage last week took turns pummeling Bloomberg with varying degrees of aggression. Bloomberg is a tempting target — a recent arrival in the Democratic Party who's skipping the early contests that the other candidates have sweated for a year in hopes of wiping out the field on Super Tuesday, March 3, with more than $500 million he's spent on ads. But every time Bloomberg gets hit is a moment that Sanders doesn't.

Bloomberg's main antagonist has been Massachusetts Sen. Elizabeth Warren, who shares space on the party's left wing with Sanders. During a campaign stop in Denver she said Bloomberg is "the riskiest candidate on that stage" and pointedly refused to attack Sanders. Warren's criticism of Bloomberg proved a boon to her fundraising, but she finished a distant fourth in Nevada's caucuses. Will she savage him again and, if so, does that drown out the other candidates' criticism of the Sanders?

CAN BIDEN THROW A PUNCH?

Former Vice President Joe Biden has been the favorite to win South Carolina because of his strength among black voters, who could make up two-thirds of primary voters. But Biden has disappointed in each of the three other early state contests, is low on campaign cash and now faces a stiff challenge in the state from an energized Sanders. Biden desperately needs a victory. He may also need to mix it up.

Biden is known to dislike attacking fellow Democrats, and he's personally fond of Sanders. During the debate last week he wove in vague allusions to Sanders' votes on guns and immigration, then pounded the Vermont senator on those issues in campaign appearances before far fewer voters. Whether Biden has any political future may depend on his ability to swallow deep and hit hard. Can he do it?

Here is what Joe Biden talked about at the NBC News/MSNBC Democratic debate in Las Vegas on Feb. 19, 2020.

CAN THE OTHER BILLIONAIRE CHANGE THE DYNAMIC?

Tom Steyer is back on stage Tuesday night. The other billionaire in the race, Steyer, who ran a hedge fund, has spent nearly a quarter of a billion dollars but has finished near the basement of every contest so far. He couldn't even make the debate stage in Las Vegas. 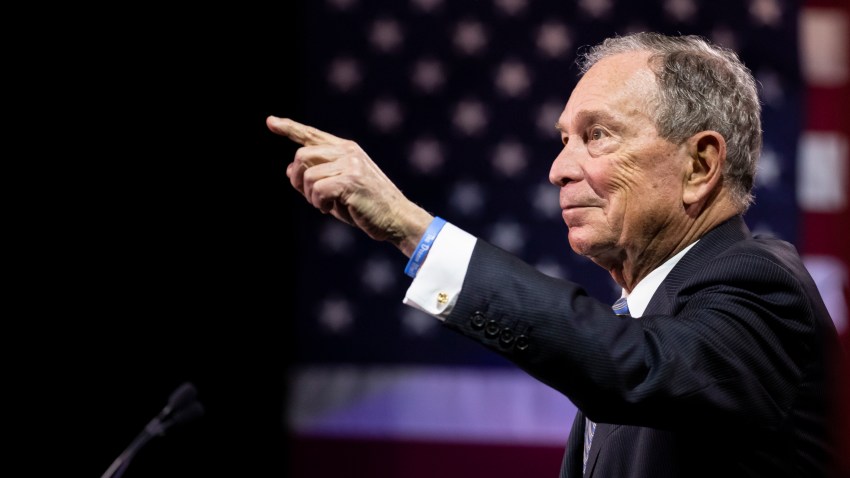 Years of Largesse Give Bloomberg His Own Political Machine

One Clear Message From Democrats: We Want Big Change

But South Carolina could be much different. An NBC News/Marist poll of South Carolina released Monday showed him with 15% support, trailing only Biden and Sanders.

He's been spending heavily in South Carolina hoping to upset Biden, but has begun to target Sanders on the stump and in attack ads. He's also run harsh ads against Bloomberg. So many targets, so little time. Who does Steyer go after?

After Tuesday’s Democratic presidential debate, candidate Tom Steyer commented that climate change, his campaign’s number one priority, was left entirely out of the debate. “The impeachment discussion was worth it, but I’ll tell you what broke my heart, was no asked a question about climate,” he said.

WHAT ABOUT THE OTHER TWO PEOPLE ON STAGE?

Former South Bend, Indiana, Mayor Pete Buttigieg has been sharpening his attacks on Sanders. He just released an ad hitting the Vermont senator's "Medicare for All" proposal.

At the last debate, Buttigieg's plan seemed to be to go after Sanders and Bloomberg, but he kept getting pulled into a scuffle with Minnesota Sen. Amy Klobuchar. The rivalry between the two illustrates the divided nature of the field that's helped Sanders win.

Both Buttigieg and Klobuchar face pressure to drop out of the race. They can't point to states they could win on Super Tuesday except, in the senator's case, Klobuchar's home state of Minnesota. But they both did better than Biden in Iowa and New Hampshire and feel they've earned a clean shot at the nomination. What do they do to take that shot?