Gov. Gavin Newsom cruised to victory in the recall election and will stay in office, saying he's humbled and grateful for voters who threw their support behind "all those things we hold dear as Californians."

As early returns were released Tuesday night, the question of whether Newsom should be recalled was met with a resounding "no," with nearly 70% of early ballots rejecting the move.

As more returns were tallied, Newsom maintained support of roughly two-thirds of voters. Every major network and news organization quickly called the race over less than an hour after polls closed.

Newsom, appearing weary from weeks of intense campaigning, spoke to supporters in Sacramento and claimed victory, saying the resounding "no" vote was in support of democratic and progressive ideals and a rejection of cynical divisions.

"I want to focus on what we said 'yes' to as a state," Newsom said.

Note: For Governor Gavin Newsom to be removed, a majority “yes” vote is needed. If that happens, the candidate with the most votes will succeed him.
Source: California Secretary of State

He added: "Tonight, I am humbled, grateful, but resolved in the spirit of my political hero Robert Kennedy to make more gentle the life of this world." 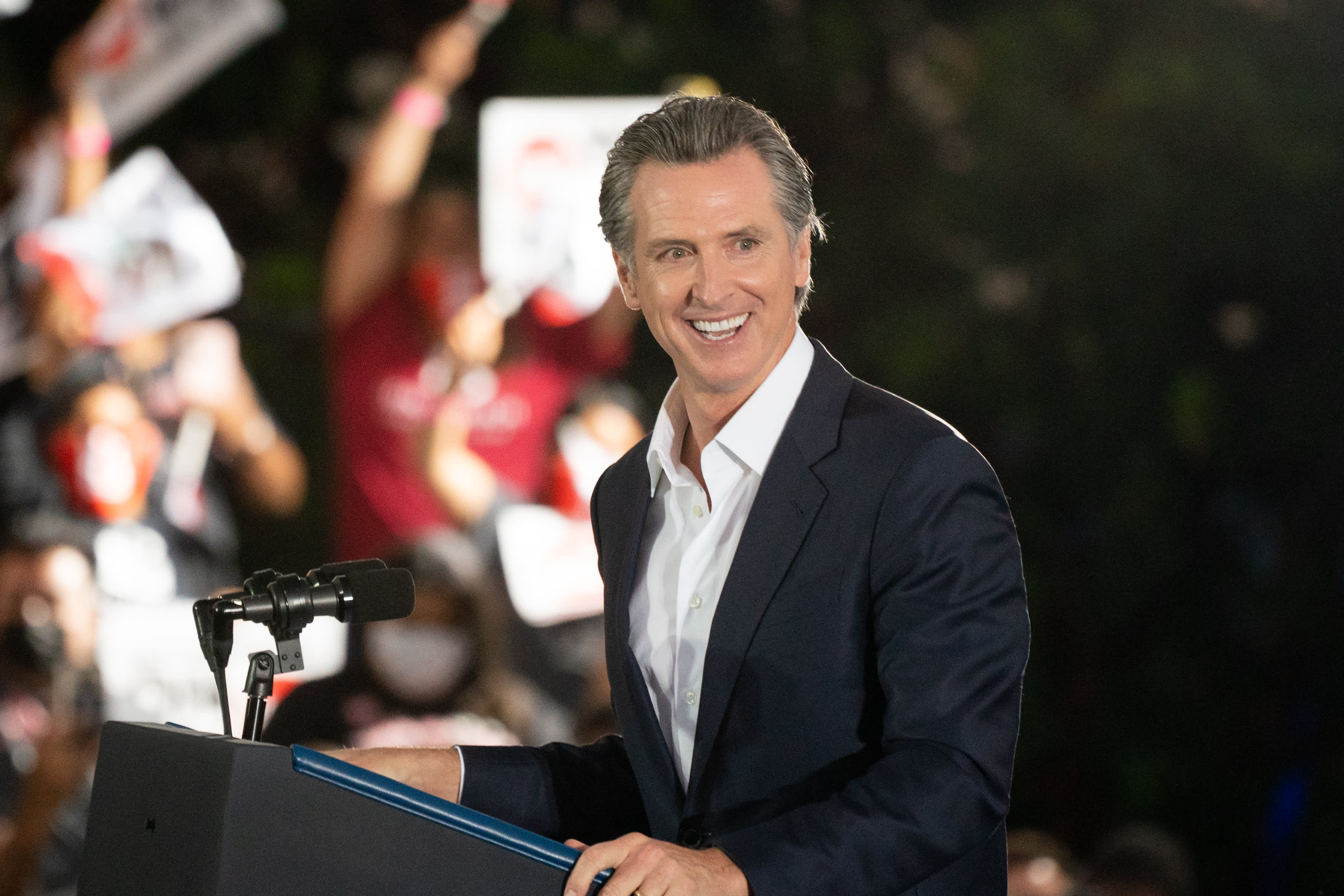 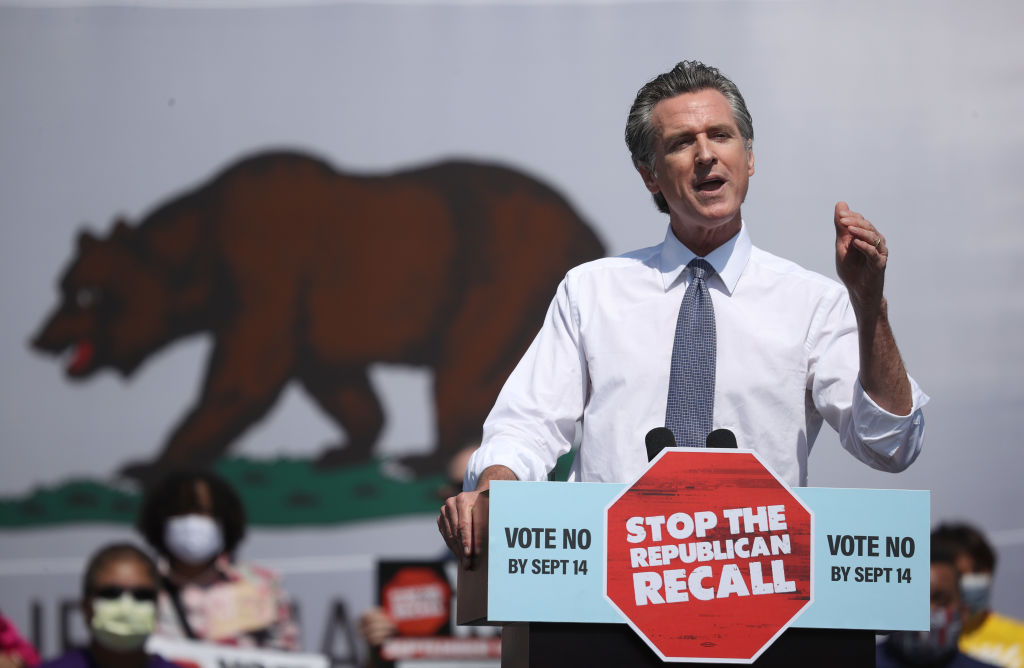 The recall ballot contained only two questions: should Newsom be recalled — removed — from office, and if so, which of the 46 candidates on the ballot or seven write-in candidates should replace him?

Newsom needed 50% or more voters to respond "no" to the first question to remain in office. With Newsom quickly and convincingly passing that mark, the second question was quickly deemed irrelevant.

Faulconer, speaking before any results were in, positioned the recall as "a referendum on Gavin Newsom's failure," saying, "That's why so many Californians not only signed the recall petition, but that's why Californians in all parts of the state, all party registrations, are ready for a change at the top."

Democrats celebrated an early and welcome win by Newsom. Hetty Chang reports for the NBC4 News on Tuesday, Sept. 14, 2021.

"It's clear that our work in California is not finished," he told supporters. "This recall showed that if you keep the focus on Gavin Newsom, he can be beat … the focus of this election turned into national politics and personalities."

Elder was not so quick to concede, but he finally took the stage at his campaign-night party in Costa Mesa at 10 p.m. and admitted defeat.

"Let's be gracious in defeat," Elder told the crowd. "We may have lost the battle but we are going to win the war."

Another prominent Republican in the race, businessman John Cox, conceded defeat early, but told supporters Tuesday night the fight to gain control of the state is not over.

The people have had a say, the organizers of the recall say. Beverly White reports for the NBC4 News on Tuesday, Sept. 14, 2021.

"I'm a CPA. I'm a businessman," he said. "I'm horrified at the waste, the corruption, the mismanagement of this state. I'm still hopeful that I'll get a chance to manage this government and turn it around. But a message has been sent. A message has been sent to the majority party. This battle has just begun."

"A governor who follows science, who's got the courage to do what's right," the president added

Biden sought to tie supporters of the recall to former President Donald Trump, who is tremendously unpopular in California.

"You either keep Gavin Newsom as your governor or you get Donald Trump," Biden told the crowd of approximately 1,100, including Sen. Alex Padilla, D-California, Los Angeles Mayor Eric Garcetti and Los Angeles County Supervisors Janice Hahn and Hilda Solis.

"The choice should be absolutely clear. Gavin Newsom. You have a governor who has the courage to lead."

Elder had dismissed the presidential support for the governor.

"If Gavin Newsom thinks that flying in Joe Biden and Kamala Harris -not exactly the most admired government officials at the present time -will make him look better, that's all you need to know about how oblivious and detached Newsom is from a large majority of Californians," Elder tweeted last week.

During a Monday morning appearance in Monterey Park, Elder repeated many of the recall's themes -- criticism of Newsom's handling of issues such as homelessness, crime and the COVID-19 pandemic, accusing him of "ignoring science" in the imposition of business and school closures.

Elder also shot back at recall critics who have labeled it a "Republican" movement.

"There are 2 million people that signed that petition," Elder said.

Elder is an outspoken opponent of government mandates — such as those requiring mask-wearing or receiving COVID vaccines — and had vowed to eliminate them immediately if elected.

From afar, Trump had repeated his refrain of questioning the integrity of recall election, suggesting without any evidence that the race was rigged — just as he did before and after he lost his presidential re-election bid to Biden.

In recent days, Elder picked up on that theme, with his campaign posting a link to an online election-fraud reporting website and the candidate himself refusing to say whether he would accept the results of the election.

With the victory, Newsom avoided the fate of former California Gov. Gray Davis, who was removed from office by recall in 2003. He was replaced by actor Arnold Schwarzenegger.

Victory parties took place across LA County. At the Post and Beam in Baldwin Hills along were several leaders and lawmakers who worked hard to get out the Black vote.

In their words, the victory was early and very welcome.

"It sends a clear message that the people of this state rejected out of hand the effort that was being advanced by the forces of Trumpism," said LA City Councilman Mark Ridley-Thomas.

He said it was a coup attempt.

"That's exactly what it was, a coup to try to take out this governor," said Gipson, who's also the co-chair of AAVREP, the African American Voter Registration Education and Participant Project.

A leader of the movement to replace Newsom says he’s proud of his team for working 18 months to get the recall on the ballot.

Mike Netter, the co-founder of RecallGavin2020.com says his political action committee succeeded in putting the recall to the voters, even if it failed to remove the sitting governor.

"The people have had a say one way or the other," he said. "Whether it's Mr. Elder, Mr. Cox, Mr. Kiley, Mr. Faulconer? No one is going to solve the problems of California in 15 months."

Voters said it's not just the names or issues on a ballot, but the right to be heard at all.

"I have access to voting," said Maria la Saba. "Not everyone in my community does. So I have to use my voice, to put in my part."

Trell Thomas said he voted because people gave their lives for him to have this opportunity.

"I vote for my ancestors, family members, my community," he said.