The Republican National Convention continued on Tuesday, featuring a slate of speakers including three members of the president's family and the first appearance by a current secretary of state at a political convention since WWII.

Here are some of the takeaways from the second night of the 2020 RNC.

President Donald Trump sought to leverage the full weight of the presidency behind his reelection effort, as he blended official acts and campaigning during the Republican National Convention.

Secretary of State Mike Pompeo addressed the convention in a pretaped address recorded on Monday in Jerusalem amid his taxpayer-funded trip to the region.

“President Trump has put his America First vision into action," Pompeo said. "It may not have made him popular in every foreign capital, but it’s worked.”

Pompeo's taped appearance breaks with decades of tradition of secretaries of state avoiding the appearance of involving themselves in domestic politics. That his video was filmed in Jerusalem, where he was on an official foreign trip, has raised additional questions of propriety.

The convention also aired a video featuring Trump signing a pardon for Jon Ponder, an ex-convict who now runs a prisoner reentry program. Later, military aides opened the doors to the White House Cross Hall as “Hail to the Chief” played before Trump presided over a naturalization ceremony for new Americans. Both events were taped in recent days as Trump and his reelection campaign looked to find ways to airbrush the harsher edges of his actual policies. 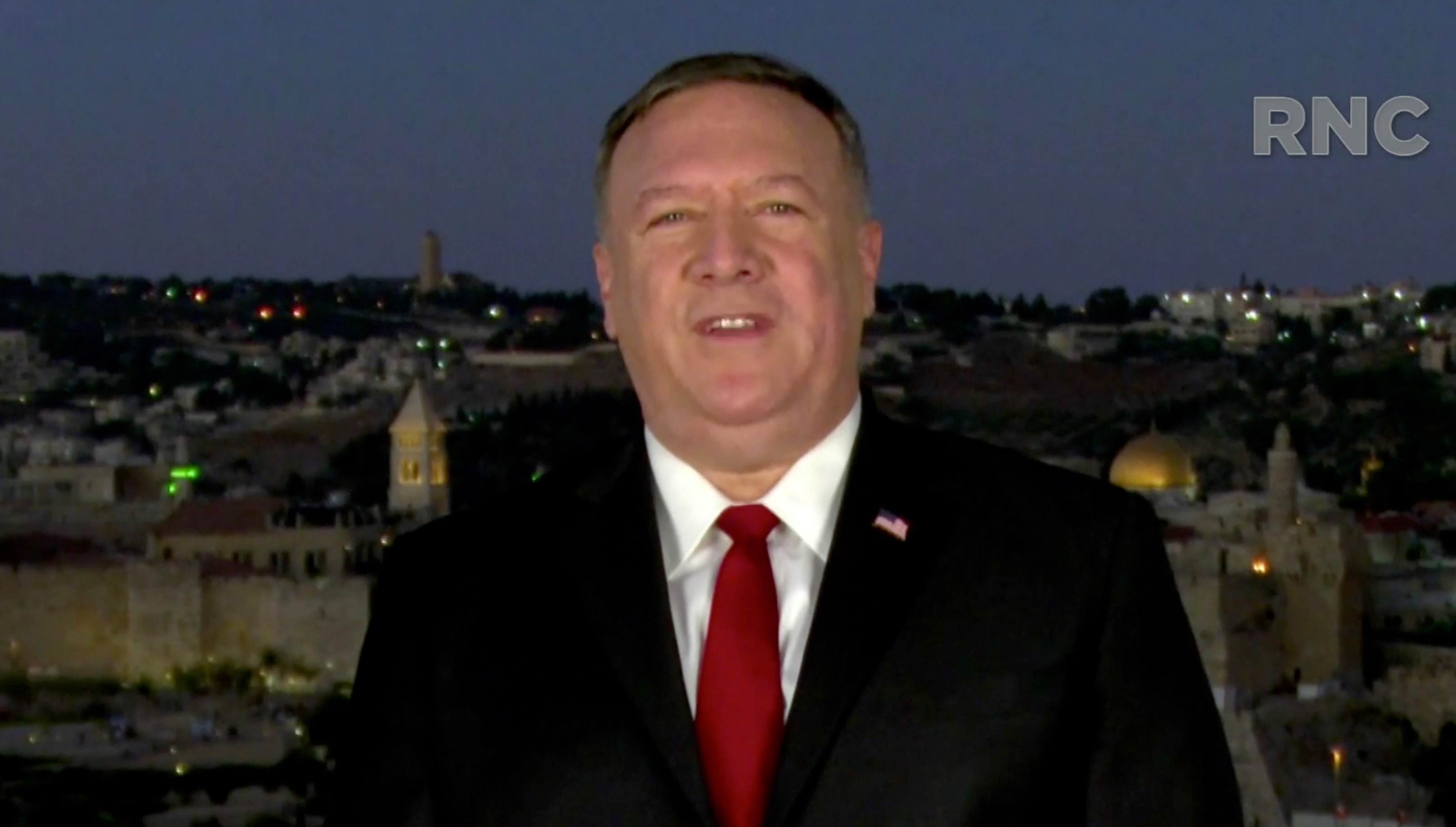 They will add to criticism that Trump is exploiting the White House for political purposes in ways none of his predecessors have. While Trump is not covered by the federal Hatch Act, which limits the political activities of most federal workers, previous presidents have tended to draw clear distinctions between campaigning and governing.

The events came in the run-up to the night's headliner, first lady Melania Trump, who delivered an address in the newly renovated Rose Garden. And on the final night of the convention, Trump is set to deliver his nomination acceptance speech from an elaborate stage on the White House South Lawn.

Melania Trump took on the coronavirus pandemic in a speech very unlike others at the Republican National Convention so far.

"My deepest sympathy goes out to everyone who has lost a loved one," she said in her keynote speech Tuesday. "I know many people are anxious and some feel helpless. I want you to know you are not alone."

Speaking before a live audience in the White House Rose Garden, she said that the Trump administration would not stop fighting until there was an effective vaccine and treatment.

She also acknowledged the country’s past in the slave trade and the current racial unrest.

"We are not proud of parts of our history," she said.

She urged people to come together, both to stop violence and looting and never to judge someone based on their skin color.

First lady Melania Trump delivered a speech from the White House on the second night of the Republican National Convention.

Critics point to an abysmal response to the pandemic on the part of the federal government and blame her husband for exacerbating racial tensions long before he became president.

Son Eric Trump, by contrast, promoted the American economy under his father, and the "forgotten men and women, voiceless in Washington, D.C," without acknowledging the pandemic at all and the damage it has done to the economy.

Tiffany Trump, Donald Trump's youngest daughter, gave a run down of what she called the uncensored truth of the Trump administration's beliefs: equality of opportunity, school choice, freedom of thought and religion.

She appealed to voters who did not think of themselves as Trump supporters, urging them to vote for her father if they cared about living their lives without restraints.

Tiffany Trump, youngest daughter of President Donald Trump, outlined the values of her father's presidential campaign during the second night of the Republican National Convention.

Larry Kudlow, an assistant to the president for economic policy, spoke of the coronavirus pandemic in the past tense Tuesday night in his speech to the Republican National Convention even though it continues to surge in parts of the country.

"Then came a once-in-100-year pandemic," he said after describing a successful economy under President Donald Trump. "It was awful. Health and economic impacts were tragic. Hardship and heartbreak were everywhere. But presidential leadership came swiftly and effectively with an extraordinary rescue for health and safety to successfully fight the COVID virus."

Kudlow’s comments came as more than 500 new coronavirus deaths and more than 40,000 new cases were reported on Monday. In all there have been more than 178,000 deaths in the United States and 5.7 million cases though the number of deaths and new cases have dropped since the end of July.

Trump’s administration has come under repeated criticism for its response to the pandemic, from failing to help overburdened hospitals quickly enough to offering a muddled and contradictory message over how to fight the virus.

This is not the first time that Kudlow has seemed to declare the pandemic over. In February he told CNBC: ““We have contained this. I won’t say [it’s] airtight, but it’s pretty close to airtight.”

He added that, while the outbreak is a "human tragedy," it will likely not be an "economic tragedy."

Neither statement was true.

The mother of a police officer killed by a undocumented immigrant driving drunk was pulled from the line-up of the Republican National Convention Tuesday after she retweeted comments about an anti-Semitic conspiracy theory.

Mary Ann Mendoza had been expected to talk about the death of her son, Brandon, a 32-year-old police officer in Arizona, and her reasons for backing President Donald Trump’s anti-immigrant positions. “My speech is really centered on the importance of law enforcement, border security and the things our president has done to make our country safer,” she told Fox News earlier Tuesday.

But Mendoza lost her spot after she retweeted QAnon and anti-Semitic conspiracy theories, which she urged her followers to read. The Twitter thread claimed that the infamously false "Protocols of the Elders of Zion" was not fabrication and "it certainly is not anti-Semetic (sic) to point out this fact."

The tweet, first reported by The Daily Beast, also claimed that Jewish bankers were trying to enslave non-Jews and it added QAnon conspiracies that drew in the Titanic and Hillary Clinton.

Mendoza apologized Tuesday night, saying, "I retweeted a very long thread earlier without reading every post within the thread. My apologies for not paying attention to the intent of the whole message. That does not reflect my feelings or personal thoughts whatsoever."

Campaign spokesman Tim Murtaugh confirmed that Mendoza’s videotaped remarks was removed and would not run this week. He gave no reason.

QAnon claims that President Trump is battling a Democratic and Hollywood cabal of child abusers.