A 13-year-old Utah boy with autism was shot by police after his mother asked for help getting him hospital mental-health treatment and officers agreed to talk with him, police footage released Monday showed.

The videos show Salt Lake City officers chasing him down an alley after they arrive at his home, then yelling at him to get on the ground. The boy collapses after a series of shots ring out, moaning, “I don’t feel good. I don’t feel good.” He survived but suffered broken bones and pierced organs, the family's attorney has said.

His mother, Golda Barton, had warned police that her son said earlier that day, Sept. 4, that he had a gun and had threatened to shoot her male coworker and break windows in the house, the video showed. But she told officers she thought it was a BB gun or pellet gun. It wasn't clear if he was armed.

She wanted him to be hospitalized for help with his mental health issues.

Officers said they would have to proceed as though the boy did have access to a real gun, the videos show. Barton told officers the boy was “triggered” by seeing police.

“He sees the badge and he automatically thinks you are going to kill him or he has to defend himself in some way,” she said. “He freaks out.”

The video was made public under a Salt Lake City ordinance requiring the release of video from police shootings within 10 business days. 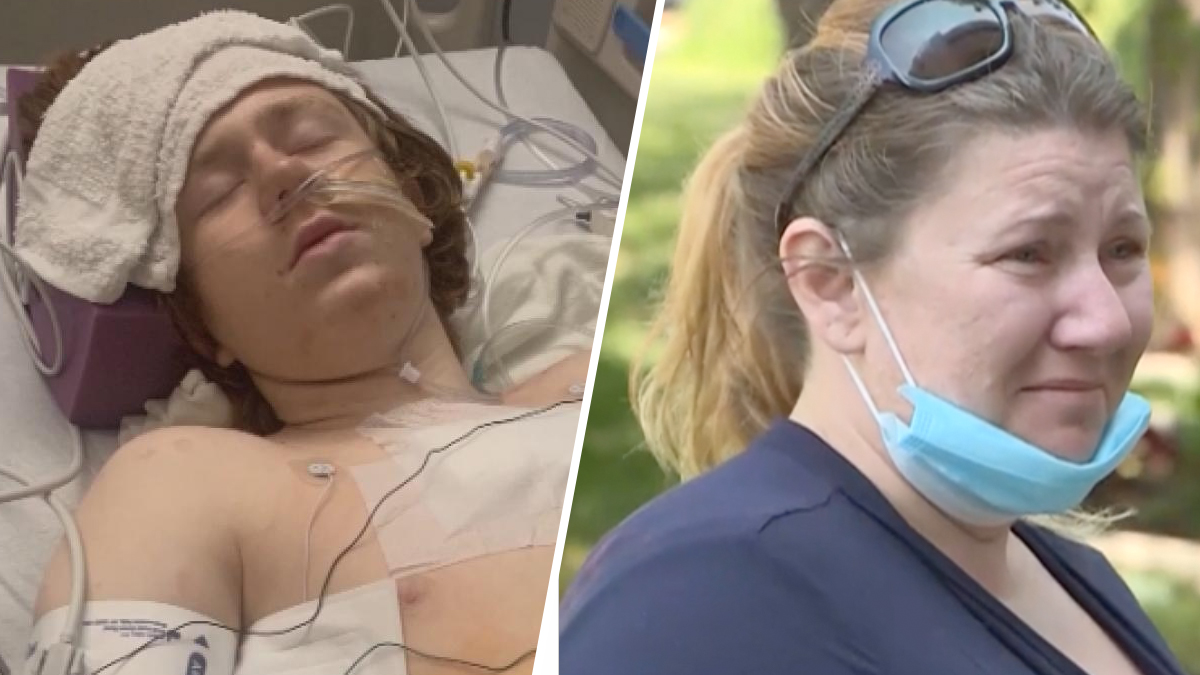 The shooting has raised new questions about how police deal with people with mental health issues amid nationwide calls for police reform. It came hours before new deescalation tactics were due to take effect for Salt Lake City police, which is also cooperating with an independent investigation of the shooting.

In one video, two officers can be heard discussing whether or not to approach the boy because they were concerned that the incident would result in a shooting.

“Especially when he hates cops, it’s probably gonna end in a shooting,” one officer said.

As officers approach the house, one says he can see movement in the backyard. The officers start to run after the boy — yelling at him to stop and get on the ground. When they catch up to the boy, they ask him to get on the ground again.

The boy ignores their commands and continues walking before a series of shots ring out.

The videos don't seem to show the boy holding any weapon and police don't mention any in a report also released Monday.

Barton has said she told dispatchers her son was having a breakdown and she needed help from a crisis-intervention officer.

On the 911 call recording, she said she has called the cops before on her son and that he has previously run away from officers.

Nearly a week after the police shooting that wounded a 13-year-old Salt Lake City boy with autism, Salt Lake City's police chief has commented on the case. Police Chief Mike Brown said, while he couldn’t offer more details yet, the department would release video from the shooting of the teen within 10 business days.

She added: “That’s why we need a mental health worker,” she said. “It’s super important.”

The Salt Lake City officers who arrived had some mental-health training but were not specialists in crisis intervention.

The boy "was lucky to be alive," his attorney Zach Weyher said.

“Whatever happened, it was a 13-year-old boy who was unarmed. The police were called for a mental-health call, not a criminal act,” Weyher said. “A child is laying in a hospital bed ... there has to be a better response.”

The mayor of Salt Lake City, Erin Mendenhall, said at a news conference Monday that as a mother of a 14-year-old boy she was profoundly upset by the shooting. She called for a quick but thorough investigation about what happened.

“I am profoundly heartbroken and frustrated,” she said. “It’s a tragedy for this young boy, for his mother and for families and individuals who have acute mental health needs.”

Eppolito is a corps member for the Associated Press/Report for America Statehouse News Initiative. Report for America is a nonprofit national service program that places journalists in local newsrooms to report on undercovered issues.