Endy Garcia said she and her family are lucky to be alive after a 2,000 pound piece of metal flew into their yard two blocks away from where fireworks exploded during a disposal effort by law enforcement on Wednesday evening.

The lid to the truck flew into Garcia's backyard Wednesday night, breaking a lemon tree and damaged the house, busting a wall and tile. Nobody at her home was hurt, but the blast injured 17 people, including 10 law-enforcement officers, and put a South LA neighborhood under evacuation orders.

"We just felt everything shake," he said. "Really, really bad and a big loud noise, like a bang!"

Residents recorded the blast on their cellphones and scrambled for cover. Beverly White reports for the NBC4 News on Wednesday, June 30, 2021.

No one has been able to move the debris away because it's so heavy.

The family said it was some of the scariest moments they've experienced.

They say they tried to report it to the LAPD after it happened but because so many officers were on site, they couldn't get ahold of anyone until Wednesday night.

Since then, the house has been yellow-tagged while the Bureau of Alcohol, Tobacco, Firearms and Explosives works its investigation.

The LAPD and ATF were trying to determine what caused the explosion, after police attempted to safely detonate illegal fireworks that were seized at a house.

Some of the injured reportedly were people who didn't answer the door when officers attempted to evacuate the area prior to the ill-fated blast. 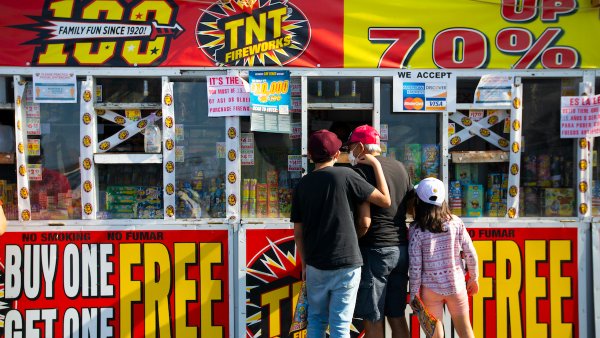 A man was in custody Thursday morning in connection with the fireworks. Arturo Cejas III, 27, was arrested on suspicion of reckless or malicious possession of a destructive device.

Around 6:40 p.m. Wednesday, police attempted to dispose of some of the approximately 5,000 pounds of fireworks they discovered earlier in the day by detonating them in an armored container in the 700 block of East 27th Street, near San Pedro Street.

The force of the blast destroyed the container -- and damaged nearby homes, shattered glass in the neighborhood and caused damage to several cars parked on the street.

The explosion in South LA injured 17 and put a neighborhood under evacuation orders. Gordon Tokumatsu reports for the NBC4 News on Thursday, July 1, 2021.

At least a dozen homes were damaged, and that the damage extended at least half a block from the blast.

Several homes were damaged by the explosion, and Los Angeles Department of Building and Safety personnel were evaluating them to determine if anyone will need emergency shelter.

Thomas Mendez said it felt like a giant bomb.

"It felt like a wave going off, explosion," he said. "The pressure … If you had been closer you would have been injured."