The question-and-answer sessions is expected to last two days

With opening arguments wrapped up in President Donald Trump’s impeachment trial, senators will now get a chance to ask questions. But the normally loquacious politicians will still have to keep silent, as their questions can only be submitted in writing.

The question-and-answer session, expected to last two days, will allow the lawyers on both sides to make their final points before the senators vote on whether to hear witnesses and, eventually, on whether to convict the president and remove him from office.

A look at the questions and answers:

The senators must submit their questions to the presiding officer, Chief Justice John Roberts. He will then read them and request an answer.

Senators must direct their question to either the House impeachment managers or the White House lawyers, not both, and senators cannot ask each other questions. Senators also cannot respond after their questions are answered.

The process keeps the senators silent, like a jury, as they decide whether to vote to convict the president.

President Donald Trump’s legal defense team wrapped up their opening arguments at the Senate impeachment trial on Tuesday. Here are some of the top moments you may have missed.

Senate Majority Leader Mitch McConnell said Tuesday that the questions would alternate between Republicans and Democrats.

Senators on both sides have been coordinating with their leadership to ensure the questions are not duplicative. Sen. Kevin Cramer, R-N.D., said he’d been given a form on which to list his questions. Sen. Dick Durbin, D-Ill., said he’d given his questions to Senate Democratic leader Chuck Schumer’s office, just so they could figure out the "sequencing and avoiding duplication."

Durbin said that when he asked a question during the impeachment trial of President Bill Clinton, "it turned out six other people had the same idea. So we all joined in one question, and it was attributed to all of us."

Democratic House managers addressed the media on Tuesday after President Donald Trump’s defense team wrapped up their arguments in the Senate impeachment trial.

Senators have up to 16 hours to ask questions, as they did in Clinton’s trial. That should break down into two eight-hour days, with senators taking breaks after every 10 or 12 questions.

There is no official time limit for House impeachment managers or White House lawyers to respond, but both McConnell and Roberts urged brevity.

"During the question period of the Clinton trial, senators were thoughtful and brief with their questions, and the managers and counsel were succinct in their answers," McConnell said Tuesday. "I hope we can follow both of these examples."

Roberts asked the two sides to limit their answers to five minutes each. He noted that transcripts from the Clinton trial show that a similar request by Chief Justice William Rehnquist was met with laughter from within the chamber.

Look for both sides to try to hone their final arguments with help from senators in their party.

Democrats are likely to ask friendly questions of the House impeachment managers, and Republicans to the White House. Those could be points that they felt weren’t covered during the trial or arguments they want to emphasize.

That will be particularly helpful for House Democrats, who went first in the opening arguments and don’t have a chance to rebut the White House’s legal arguments.

Democratic officials working on the impeachment trial have been practicing and are eager to answer questions. They view the question-and-answer period as an opportunity to review the evidence and the facts, which they see as a positive for their side, said one of the officials, who requested anonymity to discuss preparations.

Republican and Democratic senators will also use their questions to poke holes in the others' arguments.

Rep. Adam Schiff, D-Calif., called on the Senate on Monday to commit to calling witnesses during the impeachment trial after the New York Times reported that former National Security Adviser John Bolton reveals in a book manuscript that President Trump had ordered aid to Ukraine be withheld until securing an investigation into the Bidens.

Senators of both parties previewed what they might ask.

Sen. Chris Coons, D-Del., said "an obvious question" is whether a transcript of a July call between Trump and Ukrainian President Volodymir Zelensky is a full transcript. That call, in which Trump asks Zelensky to investigate Democrats, is at the heart of the House’s impeachment case. The White House released a rough transcript of the call, but didn’t make it clear what had been left out. 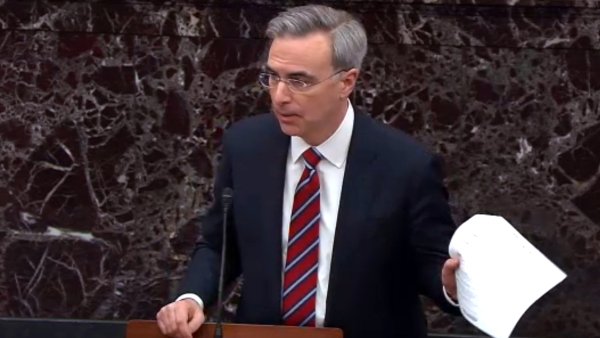 Cramer said he wants to ask House Intelligence Committee Chairman Adam Schiff, D-Calif., the lead impeachment manager, why he didn’t subpoena former national security adviser John Bolton. The House called Bolton to testify but never subpoenaed him when he didn’t show up, a point that Republicans have used to argue against Bolton’s testimony in the Senate.

Schiff has said they didn’t subpoena Bolton because he had threatened a lengthy court fight. Bolton has now said he’d testify in the Senate, but most Republicans say they've heard enough.