Mississippi officials held a ceremony Wednesday to retire the former state flag and send it to a history museum, a day after Republican Gov. Tate Reeves signed a law stripping official status from the last state banner in the U.S. that included the Confederate battle emblem.

One person watching with pride was a history-making former lawmaker whose grandfather was a slave.

Robert Clark in 1967 became the first African American since Reconstruction to win a seat in the Mississippi Legislature, and he rose to the second-highest leadership spot during his 36 years in the House. For decades, he tried to persuade colleagues that Mississippi should change the flag that many see as racist. But, people weren't ready to listen before he left office.

Now 91, Clark said Wednesday that as he watched the flag being handed over to the museum, he thought about his grandfather, who was forced to go barefoot and eat from a trough before being released from slavery at age 11.

“That’s why I fought to get the flag changed — because the flag represented that, so far as I was concerned,” Clark said after the ceremony.

Lawmakers in the Mississippi House and Senate both approved a bill that will require the current state flag to be removed within 15 days. Mississippi Gov. Tate Reeves is likely to sign the bill into law.

Mississippi faced increasing pressure in recent weeks to change its 126-year-old flag since protests against racial injustice have focused attention on Confederate symbols.

A broad coalition of legislators on Sunday passed the landmark legislation to retire the flag, capping a weekend of emotional debate and decades of effort by Black lawmakers and others who see the rebel emblem as a symbol of hatred.

Reeves signed the bill Tuesday, immediately removing official status from the banner. The new law requires a ceremony for the "prompt, dignified and respectful removal" of the banner.

Three flags flying at the Capitol were lowered Wednesday as dozens of people watched on the lawn or from open windows inside the building. Many applauded after honor guard members from the National Guard and the Mississippi Highway Patrol presented them to House Speaker Philip Gunn, Lt. Gov. Delbert Hosemann and state Department of Archives and History director Katie Blount.

Police cars with flashing blue lights escorted a vehicle that took the officials, and the flags, to the nearby Museum of Mississippi History. The museum will put one flag in an exhibit and two into archives.

“We have much to be proud of and much to reckon with,” said Gunn, who has advocated changing the flag the past five years. “This flag has flown over our best and our worst. Some flew it over their bravery to defend their homeland. And for others, it’s been a shadow over their struggle to be free.” 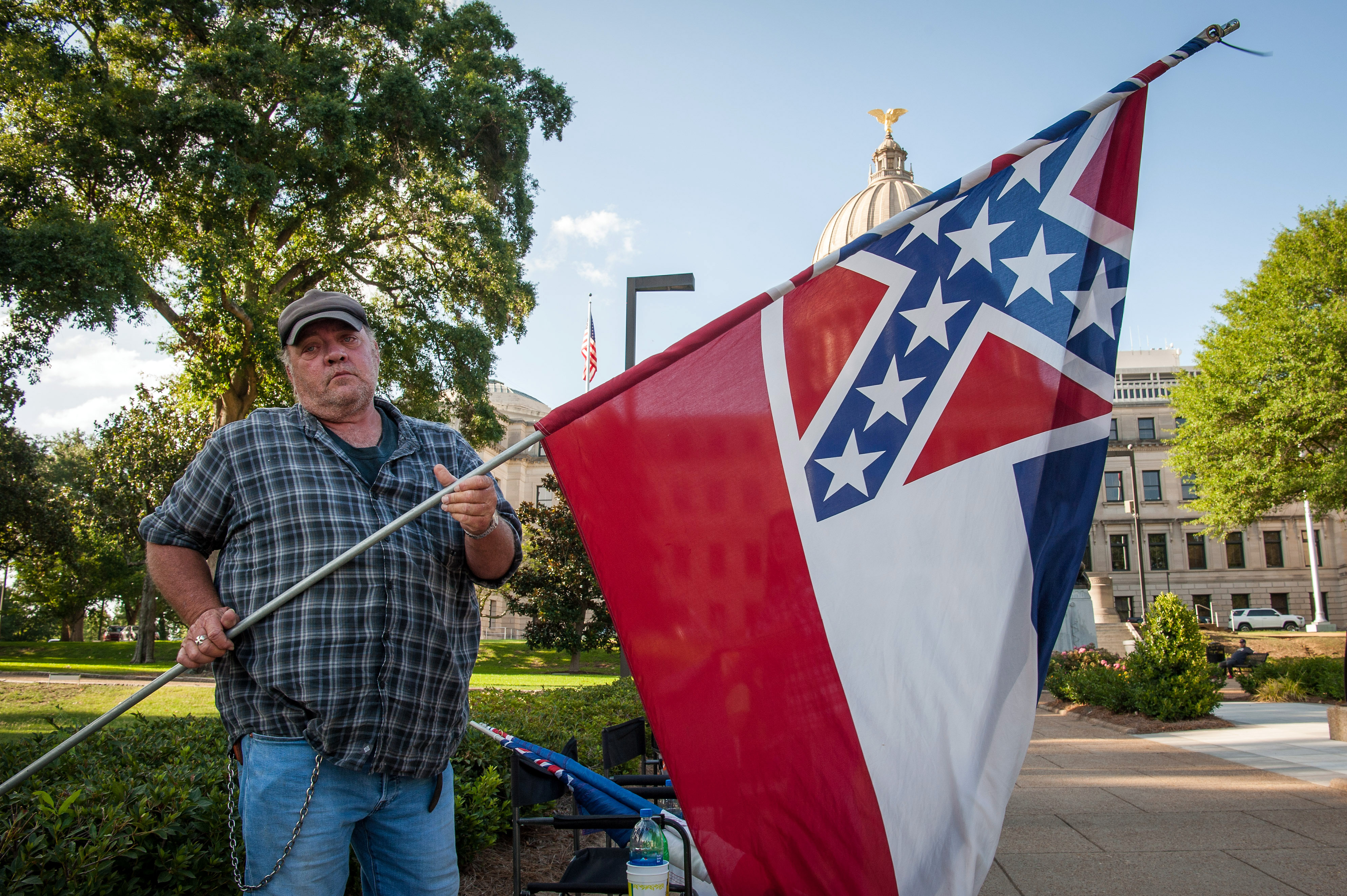 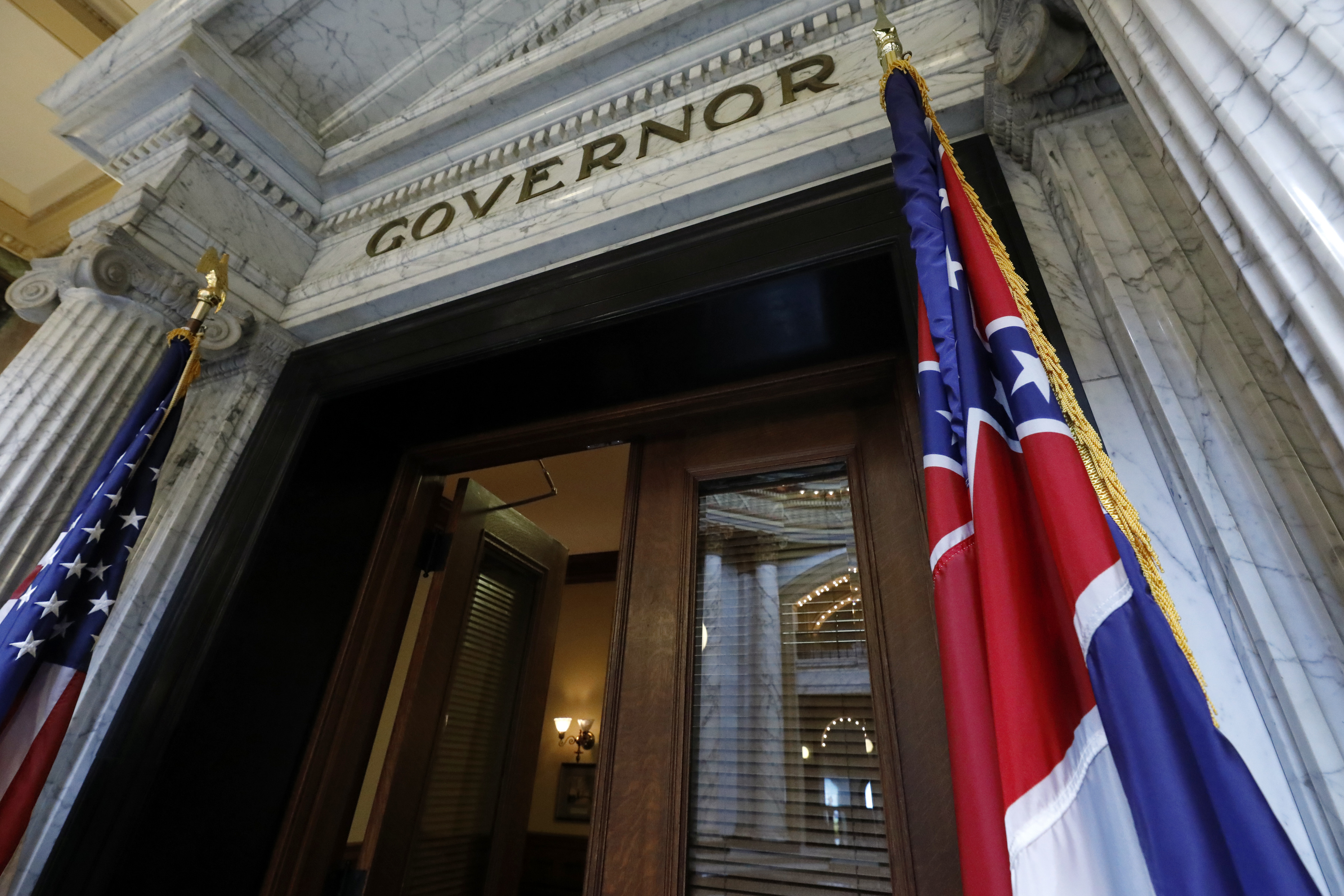 Mississippi will be without a flag for a while. A commission will design a new one that cannot include the Confederate symbol and must have the words “In God We Trust.” Voters will be asked to approve the design in the Nov. 3 election. If they reject it, the commission will draft a different design using the same guidelines, to be sent to voters later.

The Confederate battle emblem has a red field topped by a blue X with 13 white stars. White supremacist legislators put it on the upper-left corner of the Mississippi flag in 1894, as white people were squelching political power that African Americans had gained after the Civil War.

Critics have said for generations that it’s wrong for a state where 38% of the people are Black to have a flag marked by the Confederacy, particularly since the Ku Klux Klan and other hate groups have used the symbol to promote racist agendas.

Mississippi voters chose to keep the flag in a 2001 statewide election, with supporters saying they saw it as a symbol of Southern heritage. But since then, a growing number of cities and all the state’s public universities have abandoned it.

The flag issue was still broadly considered too volatile for legislators to touch, until the police custody death of an African American man in Minneapolis, George Floyd. His death set off weeks of sustained protests against racial injustice, followed by calls to take down Confederate symbols.

A groundswell of young activists, college athletes and leaders from business, religion, education and sports called on Mississippi to make the change, finally providing the momentum for legislators to vote.