It was once again winter — cold, cold winter — that dominated the mood on the fifth day of New York Fashion Week Monday, with designers presenting variations of warm clothes on a particularly freezing day.

Shows were being held at the Mercedes-Benz Fashion Week tents at Lincoln Center and at various locations throughout the city.

FASHIONISTAS WORSHIP AT THE CHURCH OF THOM BROWNE

The crowd had been waiting more than a half-hour for Thom Browne's runway show to start on Monday, listening to loud, church-type music, when the lights finally dimmed and the music stopped. "Thank God!" a male voice yelled, and the place broke out in titters.

Browne, whose fashion shows are actually elaborate theatrical productions, had transformed the Chelsea gallery space into a giant church. Wooden pews filled the room. There were huge crosses on the walls. Candles burned, and the smell of incense wafted through. Everyone was simply waiting for the priest — or someone — to get things started.

Like most of Browne's shows, once it did get going, the clothes bore little resemblance to what he would actually put in stores. 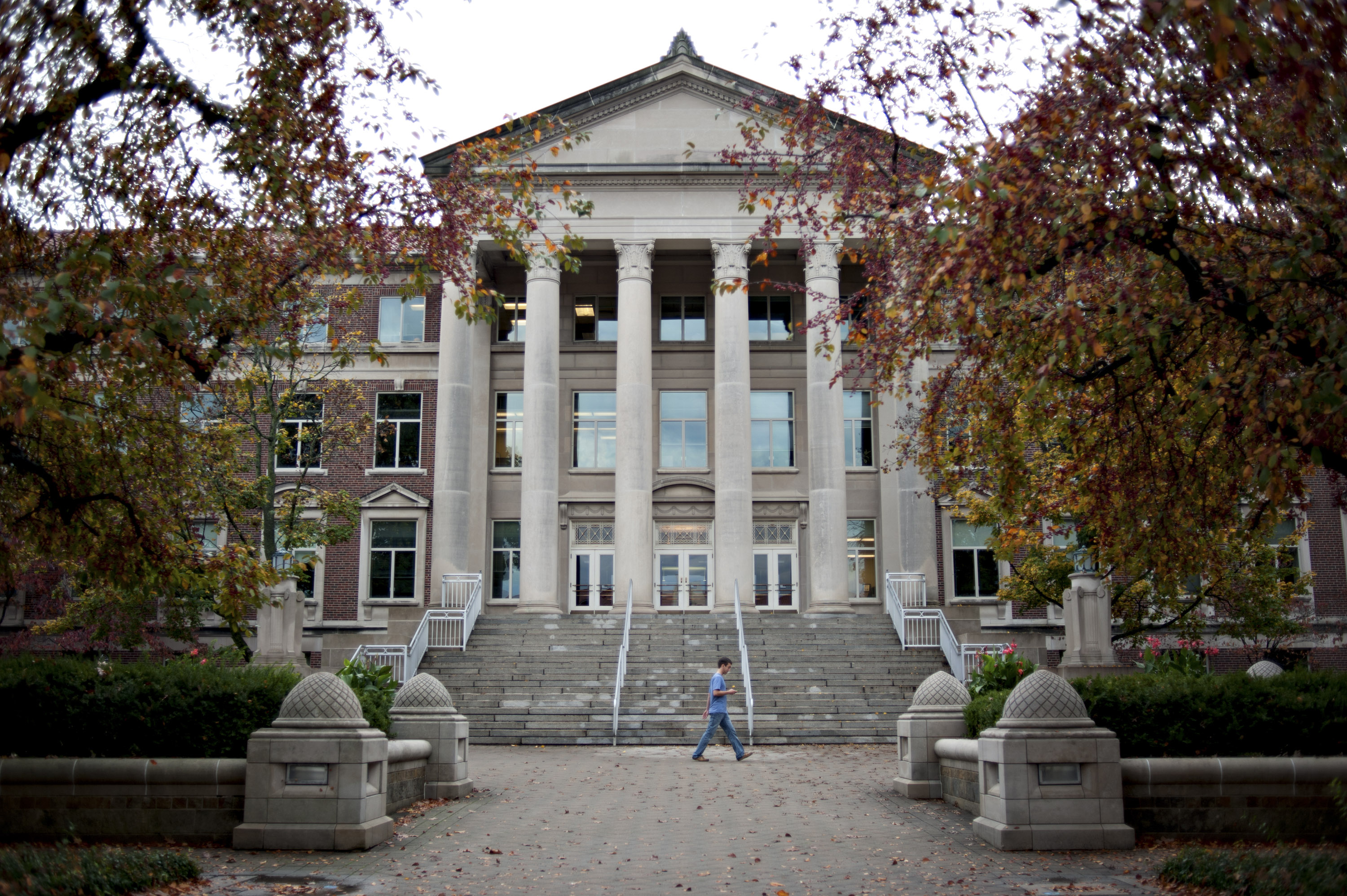 Models with white-haired wigs walked very slowly and stiffly down the runway, wearing garments that were beautifully made but frankly looked like the entire costume collection from a Tim Burton movie. The clothes — long skirts and jackets, mostly — had a vaguely Victorian feel, but also hyper-exaggerated elements like absurdly long sleeves or crazy puffed-out shoulders.

They were gorgeous, though. So if Browne wants to put on a theater presentation rather than a practical runway show, why not? Let's remember that Michelle Obama wore Thom Browne during last year's inauguration, and she didn't look anything like these wacky characters. Thom Browne the actual designer is a wholly different creature than Thom Browne the showman.

Zac Posen says he was more disciplined as he created his latest collection: He limited his choice of fabrics, and he limited his color palette, too.

But he certainly didn't limit the glamour quotient. You could practically hear the swooning when he sent out his beautifully draped, spectacular yet unadorned gowns to close out his runway show Monday.

Posen doesn't need sequins or crystals to enhance a dress. He can do a whole lot with something like pleats, which were perfect in a tangerine taffeta strapless ball gown, for example. A sea-foam silk strapless "architectural" gown evoked nothing less than a sense of being at Versailles. Without the jewels.

"This was all about elegance," Posen said in a post-show interview. "It was about line and form. I had to be disciplined. It was a tight edit."

The show began with more practical styles for daytime: A tweed suit in crimson, and a black wool coat that looked tightly tailored in front, but billowed out in back. The daytime look segued into cocktail hour, with a chic off-the-shoulder dress in ruby, and a strapless cocktail dress in a muted color Posen calls anthracite.

And then came evening styles: an opera coat in jet-black wool, for example. And then those gowns, with their grand silhouettes.

It was a nice reminder that when a dress is as expertly cut as some of these, you really don't need anything more.

Charles James isn't exactly having a runway show this week. But the late mid-20th century designer of spectacular, sumptuous ball gowns did have his Fashion Week moment on Monday, in the presence of Vogue editor Anna Wintour and other top fashion writers and editors.

The Metropolitan Museum of Art's Costume Institute hosted a teaser of its next show, "Charles James: Beyond Fashion," which opens May 8 and will be the debut exhibit for the newly named — and totally redesigned — Anna Wintour Costume Center (previously known as the Costume Institute).

James designed from the late 1920s until his death in 1978, and is known for his sweeping gowns. Christian Dior once called him "the greatest talent of my generation," Monday's crowd was told.

To give visitors a taste of the exhibit, several of James' gorgeous gowns were on display. The piece de resistance: A model floated through the room to exhibit an intricately recreated version of James' grand, black-and-white Clover dress, to show better than any film clip how the dress moved when worn.

Tommy Hilfiger's show for fall 2014 on Monday presented a much more idyllic version of the arctic conditions that have defined New York Fashion Week.

Held inside the cavernous Park Avenue Armory, Hilfiger's backdrop for his collection was, like the city, a wintry one. But instead of urban slush, he provided a scene that was snowy and rustic. A log cabin and skis sat in the background, while fir trees, boulders and fake snow mixed with mulch adorned the area around the wooden runway. ("Don't step on the mulch, please," a security guard warned guests.)

The clothes fit the chilly ambience: There were plenty of parkas, cozy sweaters and much faux fur. Plaid was a recurring pattern, featured on wool skirts of varying lengths and long mohair dresses. There were also lots of fringes, on sweaters, skirts and dresses. The colors were muted; dark blues, grays, maroon, black and cream, either alone or as a pattern, dominated the hues. Most of the models wore toasty knit caps to top off their outfits.

The collection was described by Hilfiger as having an "adventure-ready spirit."

A frigid, brutal wind was whipping off the nearby Hudson River as one approached the unassuming building in Manhattan's West Village where Mary-Kate and Ashley Olsen base their high-end fashion label, The Row.

Inside, though, waiters were offering cups of hot tea to the select crowd invited to inspect the sisters' fall 2014 collection on Monday. And luckily, the clothes were even warmer and more inviting.

The display, in a quiet room carpeted in white, began with huge, thick sweaters in luxurious "fur cashmere." One of them, particularly apt for the current weather, had a huge oversized neck that one could sink into. One coat had a collar that covered half of the face.

There were jackets of various lengths, some tailored and others extremely loose, with huge lapels. There were poncho-like garments in felt cashmere and turtlenecks of cashmere silk. And there were capes, one in wool, and a lighter, shinier one in silk satin.

In keeping with The Row's minimalist style, almost all the ensembles were in a single color: gray, black or white, with a few items in a rust color. Although the emphasis was on jackets, sweaters and pants, a few delicate dresses added a lighter element.

Note to other designers: The Olsen sisters are being very kind to women's feet. Their models wore men's-style derby shoes, and at least one observer was heard to remark upon leaving, "I want those shoes now!" (Probably to get to the next fashion show, likely miles away.)

Mary-Kate Olsen explained after the show that she and her sister formulated their collection by focusing on shapes. "We worked with rectangles, circles, lines — it was all about the shapes this season," she said. "And the techniques. We used similar fabrics as in the past, but we treated them differently."

The Olsens, childhood TV stars, have serious cred in the fashion world: They are winners of the 2012 Council of Fashion Designers of America award as the top womenswear designers.

"We're all accessories." ''If in doubt, check Instagram." ''This fashion is for real, or is it for show?" ''Everybody's life is better than yours."

Those were some of the phrases on signs carried by models in images shown during Kenneth Cole's runway show Monday.

Cole's design muse was an urban gypsy fond of wide-brimmed hats and pinstripes. He added a pop of red in sequins for women and deep burgundy for the guys.

In a backstage interview before the show, Cole said he feels he's his own customer. "I love kind of curating him and elevating him," he said.

And he talked about the big impact of social media on the fashion industry.

"It's defined how we consume what we wear, how we define ourselves, how we introduce ourselves to the world in kind of interesting and compelling ways," Cole said.

Generally, he said, social media has pushed the "real or show" question to the cultural forefront.

"Are we over-glamorizing ourselves, and if so to what end, and then one asks the question, does it matter? That's the bigger message right now. Today, social media has enabled everybody to be their own brand and they curate their brand every day, and they welcome people into their brand. And my goal as a designer today is to try and get you to accept me as part of your brand."

Cole, through social media and his foundation, is an activist for AIDS research and the homeless. An old friend, Jon Bon Jovi, was in the audience. The two designed a coat and T-shirt together for charity.

"I don't go to fashion shows, so this is fun," Bon Jovi said.

"Sometimes the potpourris are fun to look at, but it doesn't make sense for me," said Herrera, a grande dame of New York Fashion Week, after her cohesive show Monday of luxe coats, fur and bold geometric prints.

More than 30 years after her first runway show, which featured the supermodel Iman, Herrera manages new approaches. This time, her emphasis was daywear for elegant ladies, especially those not afraid of abstract prints, statement earrings and prints.

She also rounded the shoulders on jackets and narrowed the silhouettes of some dresses in a color palette that ranged from black in boiled wool to fiery red silk that fluttered down the runway. Some of her models wore high fez-like hats in rich blue and brown, while others — including Karlie Kloss — had tight, high updos.

She used fur as an accent on some jackets to show off their shape, while going full-on fur elsewhere, including a burnished copper sleeveless top with a wide collar paired with a full skirt to the ground.

PRABAL GURUNG HAS FUN WITH AFTER-PARTY CROWNS AFTER STREAKER DISRUPTION

Prabal Gurung decided to have some fun after a streaker — wearing a G-string, crown and bright red socks — briefly disrupted his runway show at New York Fashion Week.

The streaker ran onstage and knelt before one of Gurung's models as she walked the runway on Saturday. (She simply walked around him as he was chased away.)

Many people asked Gurung after the streak if he was upset about it.

"Do I wish it hadn't happened? Of course," the designer said.

But Gurung said he was out to lunch with some old friends when he decided to have some fun with it at his after-party. He bought 100 to 200 crowns to hand out, and he and his guests mugged with them all night and put up loads of photos on Instagram.

"I decided just to make a joke out of it. You can't be serious," he said Monday at his mentor Carolina Herrera's runway show. "It was fun. We really work hard, as you know, for six months to put up a 12-minute show, so a little levity is good."