Most Major US Airlines Ban Guns in Luggage for DC Flights

"We are all on high alert based on the events over the last couple weeks up in Washington,″ CEO Ed Bastian said Thursday on CNBC

Airlines and airports say they are stepping up security before next week's presidential inauguration, with Delta and other major airlines saying they will prohibit passengers flying to the Washington area from putting guns in checked bags.

The moves follow the Jan. 6 riot at the U.S. Capitol by supporters of President Donald Trump and politically tinged confrontations on some flights.

Delta Air Lines was the first to announce Thursday that it will prohibit checking guns to Washington-area airports and was followed later in the day by United, Alaska, American and Southwest. All said their bans will start Saturday and run through Inauguration Day until Jan. 23.

"We are all on high alert based on the events over the last couple weeks up in Washington,″ CEO Ed Bastian said Thursday on CNBC.

Mayor Muriel Bowser is asking that Washington, D.C., residents sign-up for the emergency alert system ahead of the upcoming inauguration. Text INAUG2021 to 888-777 for public safety and transportation alerts.

Spirit and JetBlue did not respond to requests for comment.

The airlines also announced other measures. American Airlines is bringing back a ban on serving alcohol on flights to and from the Washington area — flights go dry starting Saturday through next Thursday. Several airlines are moving crews out of downtown Washington hotels for their safety.

Earlier this week, the Federal Aviation Administration announced it will raise enforcement of rules against interfering with or assaulting airline crew members or other passengers. The FAA said that for the next two months it will stop giving warnings to violators and will instead refer their cases to law enforcement for potential charges, fines and jail terms.

FAA Administrator Stephen Dickson cited recent disturbances on planes, adding there has been “a trend after the breach of the Capitol last week.”

It has been a week since people stormed the US Capitol building and the arrests keep coming. Most recently identified were a father and son from Delaware and a retired firefighter from Delaware County. NBC10’s Jacqueline London has the details.

Key lawmakers and the head of the nation’s largest union of flight attendants have asked the FBI to place Capitol rioters on the federal no-fly list. An FBI spokesman declined to say whether any rioters have been added to the watch list, although an FBI official said Tuesday that such a move was being considered.

So far, it has fallen on the nation’s airlines to prevent an in-flight incident from getting out of control by threatening to ban people who refuse to wear masks or ignore flight attendants' orders.

Early last week, several Trump supporters in an airport and on a Delta flight from Salt Lake City to Washington heckled Sen. Mitt Romney, a Utah Republican who has criticized Trump and voted last year to remove him from office. Bastian said the hecklers were identified with help from airline employees and other passengers.

“There are six people, and they will never fly Delta again,” Bastian told The Associated Press. “They have already been notified.”

In 1789, George Washington was elected as the first president of the United States. As we prepare for President-elect Joe Biden's swearing-in, here is a look at our country's very first presidential inauguration.

A few days later, another Republican senator, Lindsey Graham of South Carolina, was harassed in the terminal at Reagan Washington National Airport after voting, in effect, to certify President-elect Joe Biden's victory over Trump. Around the same time, Alaska Airlines said it banned 14 passengers who harassed crew members and refused to wear masks during a flight from the D.C. area to Seattle.

Bastian said Delta has “significantly increased our security both seen and unseen on board planes and in airports" leading up to the Biden inauguration next Wednesday.

American said it too is adding more security staff at Washington-area airports for inauguration week and will change its gate-area announcements to remind passengers to follow crew instructions and wear face masks, said spokesman Curtis Blessing.

The airline is also moving flight crews from downtown hotels to ones closer to the airports and hiring private transportation for them. Last week, passengers on an airport shuttle bus to Reagan airport made racial slurs against a Black flight attendant, according to the union representing American's flight attendants. 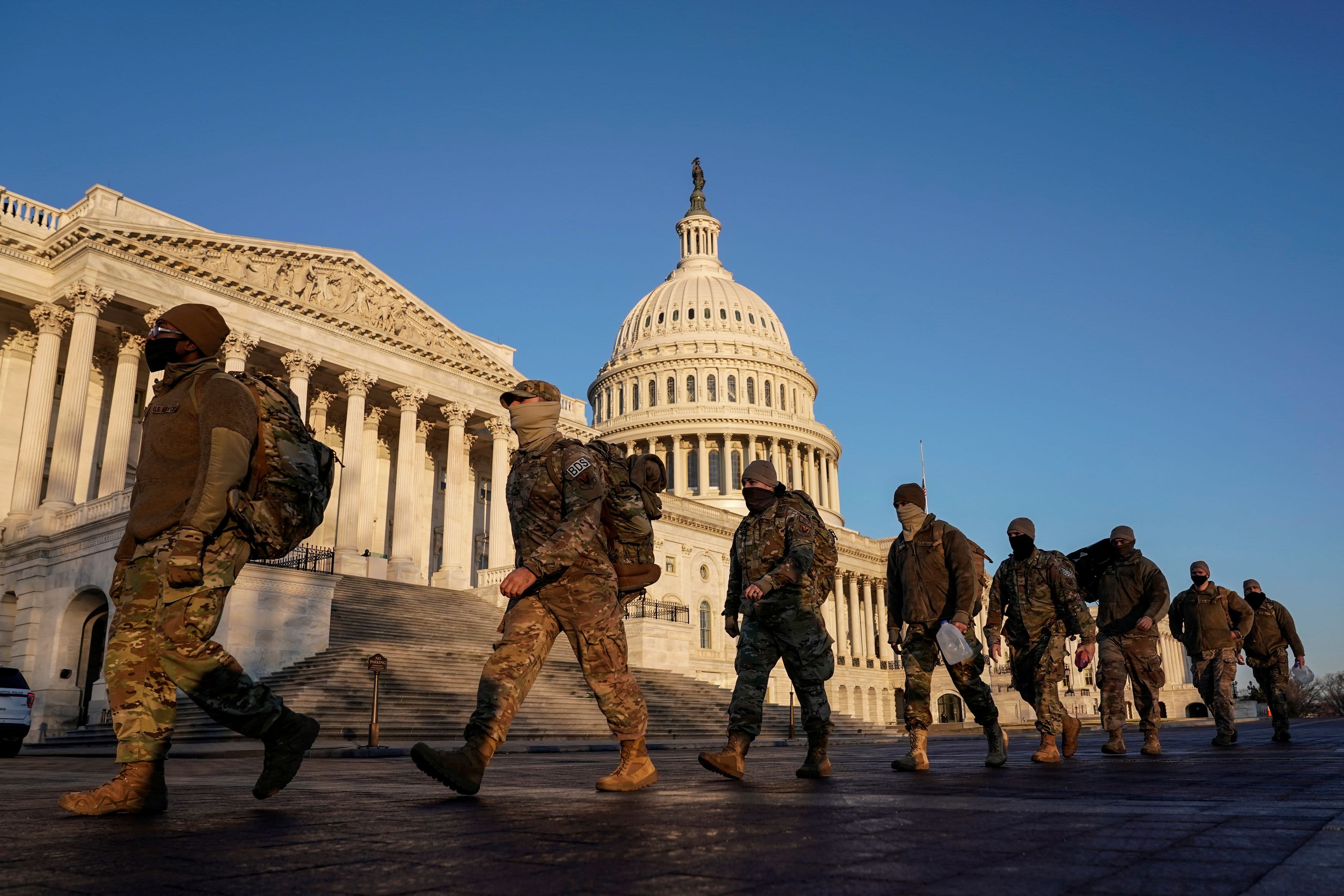 Travelers going through Reagan National or Dulles International Airport outside Washington should expect to see more police presence through the inauguration, said Micah Lillard, a spokesman for the Metropolitan Washington Airports Authority. He declined to give details.

Jeffrey Price, an aviation-security expert at Metropolitan State University in Denver, said the federal government needs to deploy more air marshals and other personnel on planes flying to and from the D.C. area.

“There have been too many incidents of flight disruptions, and flight crew should not be expected to handle these, lest they turn violent,” he said.

A Homeland Security Department spokesman declined to discuss staffing decisions Thursday, although an announcement could be made soon.

President Trump was impeached for the second time just days before President-elect Joe Biden will take office. Looking ahead, there is no historical precedent for what it means to put a president on trial in the U.S. Senate after he's left the White House. William Howell, a professor of American politics at the University of Chicago, joined LX News to break down what an impeachment trial could look like and how it will affect the incoming Biden administration.

Price also said that it is “a good idea” to prohibit passengers from putting guns in checked bags if they are flying to Washington. “After inauguration I think we can lift the ban on checked firearms," he said.

Federal law allows passengers to put guns in checked baggage if they are unloaded and in a locked, hard-sided case, although airlines have the discretion to ban guns. Federal law prohibits guns or ammunition in carry-on bags.

Two days after the Capitol riot, TSA screeners at Reagan airport stopped a departing passenger who had 100 bullets in his carry-on bag. It is not unusual for people to pack guns or ammunition in bags they intend to bring on planes — they usually say they forget it was there, and they are rarely prosecuted — but the timing of the incident drew notice.