The eruption spread out over the side of the volcano, with several distinct streams of lava running down the hillside

Waves of orange, glowing lava and ash blasted and billowed from the world’s largest active volcano in its first eruption in 38 years, and officials told people living on Hawaii’s Big Island to be ready in the event of a worst-case scenario.

The eruption of Mauna Loa wasn’t immediately endangering towns, but the U.S. Geological Survey warned the roughly 200,000 people on the Big Island that an eruption “can be very dynamic, and the location and advance of lava flows can change rapidly.”

Officials told residents to be ready to evacuate if lava flows start heading toward populated areas. Monday night, hundreds of people lined a road as lava flowed down the side of Mauna Loa and fountained into the air.

The eruption migrated northeast throughout Monday and spread out over the side of the volcano, with several distinct streams of lava running down the hillside.

The areas where lava was emerging — the volcano's summit crater and vents along the volcano's northeast flank — are both far from homes and communities.

Officials urged the public to stay away from them, given the dangers posed by lava, which is shooting 100 to 200 feet into the air out of three separate fissures roughly estimated to be 1 to 2 miles long.

Volcanic gases wafting out of the vents, primarily sulfur dioxide, are also harmful. 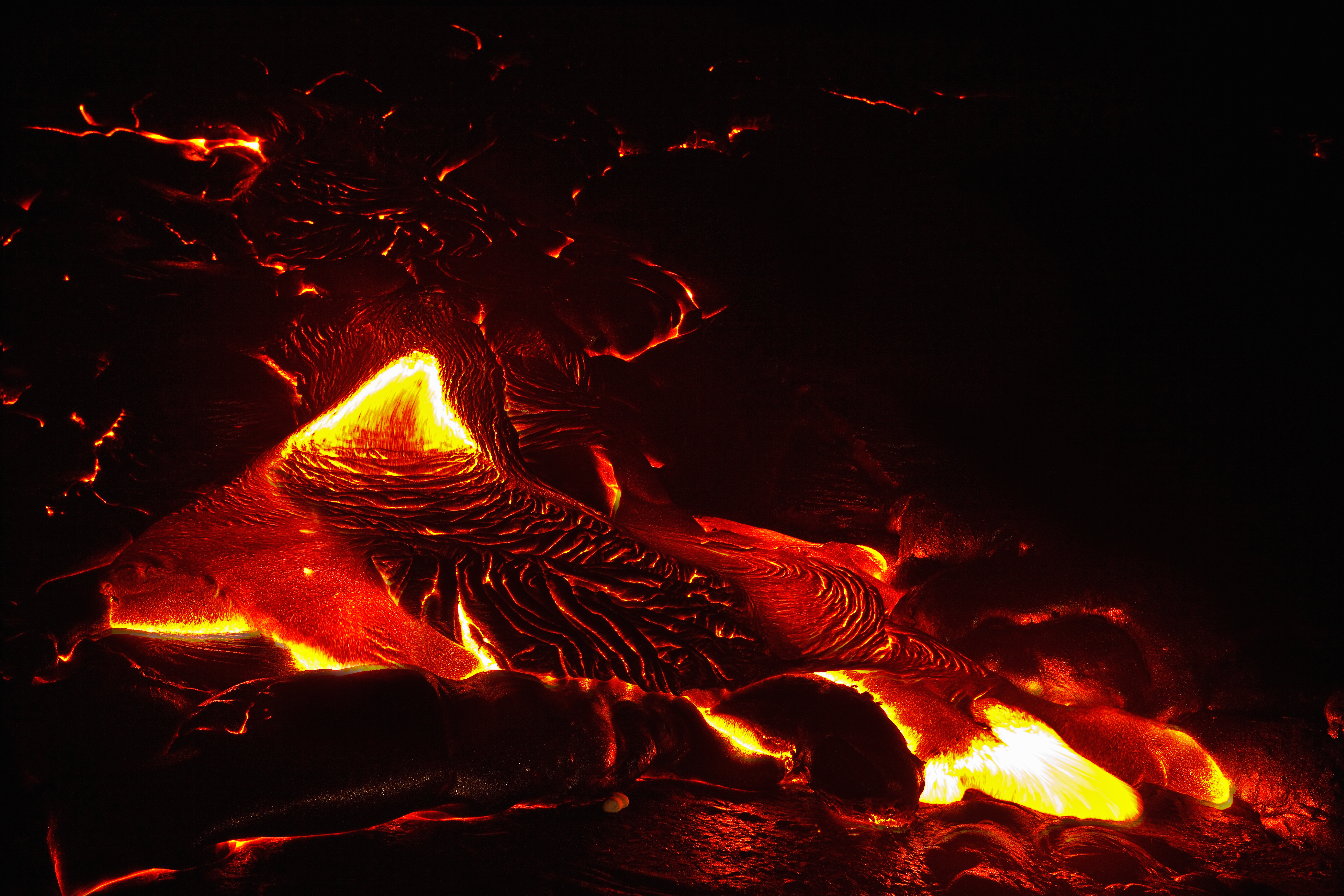 Air quality on the Big Island more generally is good right now, but officials are monitoring it carefully, said Dr. Libby Char, the director of the state Department of Health.

Hon said air quality could deteriorate while the eruption lasts, which scientists expect will be about one or two weeks if the volcano follows historical patterns.

Lifelong Big Island resident Bobby Camara, who lives in Volcano Village, said everyone across the island should keep track of the eruption. He said he’s seen three Mauna Loa eruptions in his lifetime and stressed the need for vigilance.

“I think everybody should be a little bit concerned,” he said. “We don’t know where the flow is going, we don’t know how long it’s going to last.”

Gunner Mench, who owns an art gallery in Kamuela, said he awoke shortly after midnight and saw an alert on his phone about the eruption.

Mench and his wife, Ellie, ventured out to film the eerie red glow cast over the island, watching as lava spilled down the volcano's side.

“You could see it spurting up into the air, over the edge of this depression,” Mench said.

“Right now it’s just entertainment, but the concern is” it could reach populated areas, he said.

Seeing Mauna Loa erupt is a new experience for many residents of the Big Island, where the population has more than doubled from 92,000 in 1980.

More than a third of the island's residents live either in the city of Kailua-Kona to the west of the volcano, or about 23,000 people, and Hilo to the east, with about 45,000. Officials were most worried about several subdivisions some 30 miles (50 kilometers) to the volcano's south that are home to about 5,000 people.

A time-lapse video of the eruption from overnight showed lava lighting up one area, moving across it like waves on the ocean.

The U.S. Geological Survey said the eruption had migrated to a rift zone on the volcano’s northeast flank. Rift zones are where the mountain rock is cracked and relatively weak — making it easier for magma to emerge.

Lava could move toward the county seat of Hilo, but that could take about a week, Hon said at a news conference.

Scientists hope the flow will parallel the 1984 eruption, where the lava was more viscous and slowed down.

Mauna Loa has another rift zone on its southwest flank. Lava could reach nearby communities in hours or days if the volcano erupts from this area. But Hon said historically Mauna Loa has never erupted from both rift zones simultaneously.

“So we presume at this point that all of the future activity is going to be on the northeast rift zone of Mauna Loa and not on the southeast rift zone,” he said. “So those residents in that area do not have to worry about lava flows.”

Hawaii County Civil Defense announced it had opened shelters because it had reports of people evacuating from along the coast on their own initiative.

The USGS warned residents who could be threatened by the lava flows to review their eruption preparations. Scientists had been on alert because of a recent spike in earthquakes at the summit of the volcano, which last erupted in 1984.

Portions of the Big Island were under an ashfall advisory issued by the National Weather Service in Honolulu. It said up to a quarter-inch (0.6 centimeters) of ash could accumulate in some areas.

“Volcanic gas and possibly fine ash and Pele’s hair may be carried downwind,” Gov. David Ige said, referring to glass fibers that form when hot lava erupts from a fissure and rapidly cools in the air. The wind stretches the fibers into long strands that look like hair. "So certainly we would ask those with respiratory sensitivities to take precautions to minimize exposure.”

Mauna Loa is one of five volcanoes that together make up the Big Island of Hawaii, the southernmost island in the Hawaiian archipelago.

Mauna Loa, rising 13,679 feet (4,169 meters) above sea level, is the much larger neighbor of Kilauea, which erupted in a residential neighborhood and destroyed 700 homes in 2018. Some of Mauna Loa's slopes are much steeper than Kilauea’s, so lava can flow much faster when it erupts.

During a 1950 eruption, the mountain’s lava traveled 15 miles (24 kilometers) to the ocean in under three hours.

Mauna Loa’s volume is estimated at least 18,000 square miles (75,000 square kilometers), making it the world’s largest volcano when measured from the ocean floor its summit.

Tourism is Hawaii's economic engine but Big Island Mayor Mitch Roth predicted few problems for those vacationing during the eruption.

“It will be spectacular where it is, but the chances of it really interrupting the visitor industry — very, very slim,” he said.

Tourism officials said no one should have to change Big Island travel plans.

For some, the eruption might cut down on some travel time, even if there is more volcanic smog caused by higher sulfur-dioxide emissions.

“But the good thing is you don’t have to drive from Kona over to Hawaii Volcanoes National Park to see an eruption anymore,” Roth said. “You can just look out your window at night and you’ll be able to see Mauna Loa erupting.”

Contributing to this report were Associated Press writers Jennifer Sinco Kelleher and Audrey McAvoy in Honolulu; Alina Hartounian in Phoenix; and Mark Thiessen in Anchorage, Alaska.