The Senate impeachment trial begins at 1 p.m ET. Watch live coverage in the video player below

Former President Donald Trump’s second impeachment trial begins on Tuesday, a solemn proceeding that will force lawmakers to relive the violent events of Jan. 6 as House Democrats prosecute their case for "incitement of insurrection."

The Democratic impeachment managers for the House, which impeached Trump last month, argued that he alone was responsible for inciting the mob of supporters who broke into the U.S. Capitol and interrupted the presidential electoral count. Lawyers for Trump argued the trial is unconstitutional.

Late Tuesday afternoon, the Senate approved a resolution asking whether it’s constitutional to try a former president in a Senate impeachment trial. The vote was 56-44, with six Republican senators joining all 50 Democrats to say the trial was constitutional.

The trial is expected to last into the weekend and possibly longer. It will begin midday Tuesday and could go late into some evenings.

Here are the latest developments as the trial kicks off: 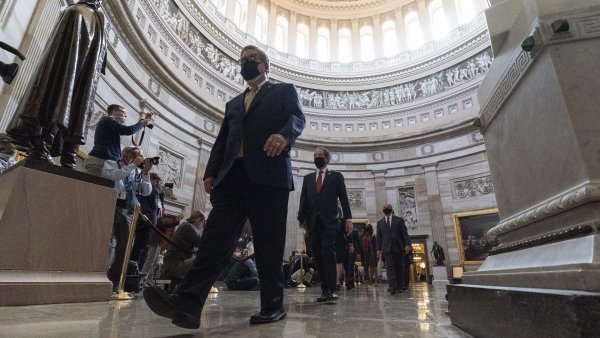 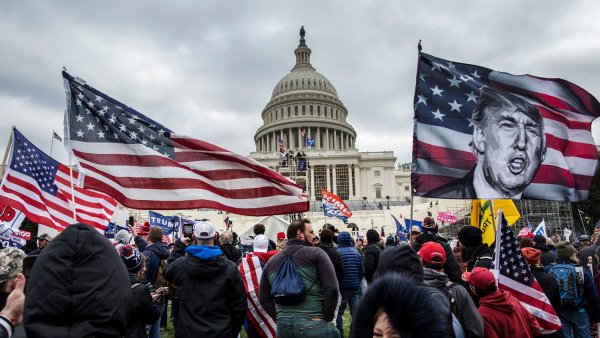 One of the lawyers heading former President Donald Trump’s defense at his second impeachment trial is conceding that Trump lost the election to Joe Biden, a fact that Trump himself has refused to acknowledge.

In opening remarks Tuesday, lawyer Bruce Castor said: “The American people are smart enough to pick a new administration if they don’t like the old one. And they just did.”

Later, Castor referred to Trump, saying: “He was removed by the voters.”

Trump has repeatedly disputed the results of the election, falsely claiming he won in a “landside.” He kept up the baseless claim during a speech before the Jan. 6 riot at the Capitol, which set in motion his trial on a charge of incitement of insurrection.

There was no widespread fraud in the election, as has been confirmed by election officials across the country and former Attorney General William Barr. Dozens of legal challenges to the election put forth by Trump and his allies were dismissed.

Raskin spoke about his personal experience in the Capitol on Jan. 6. He had been joined by family members that day — the day after he had buried his son, who took his own life in December.

His daughter and son-in-law were in an office in the Capitol and hid under a desk, where they sent what they thought were their final texts. He says, “They thought they were going to die."

Separated from them in the House chamber, Raskin described people around him calling to say goodbye to their families, members removing their congressional pins to try to evade detection. And he said he heard the rioters “pounding on the door like a battering ram” — a sound he said he would “never forget.”

He choked up as he recounted his daughter telling him she never wanted to return to the Capitol again.

Through tears, Raskin says, “This cannot be the future of America."

House Manager Rep. Joe Neguse, D-Colo., called the Capitol Riot the "Framers' worst nightmare come to life" as he sought to make the case that it was constitutional for the Senate to try Trump after he has already left office.

House Impeachment Manager Rep. Joe Neguse, D-Colo., cited historical precedents and the views of several conservative legal scholars as he sought to make the case that it was constitutional for the Senate to try Trump after he has already left office.

Neguse said the framers of the Constitution would not have intended for presidents to be let off the hook for conduct committed in their final weeks in office.

"Presidents can't inflame insurrection in their final weeks and then walk like nothing happened," he argued. "And yet that is the rule that President Trump asks you to adopt."

He also invoked the public statements of leading conservative legal scholars who in recent days have come forward to support the idea that the trial is constitutional and that the Senate has jurisdiction.

President Joe Biden is planning to largely ignore the impeachment trial of his predecessor and plans to focus on the nation’s response to the COVID-19 pandemic.

White House press secretary Jen Psaki on Tuesday said Biden would not be watching the trial of former President Donald Trump and would not “opine on back and forth arguments” taking place during the proceedings.

Biden, and Psaki on his behalf, have for weeks steadfastly refused to address much of the trial, saying they believed the process had to be done but have avoided weighing in on the particulars.

The White House has also made clear that it intends to focus on the business of government while the trial continues.

Pushing for the passage of his COVID-19 relief package, Biden was to meet with Treasury Secretary Janet Yellen on Tuesday. He also plans visits to the Pentagon and National Institute of Health later this week.

Trump’s historic second impeachment trial has opened in the Senate, with Democrats arguing that the former president should be convicted for inciting a violent mob of his supporters to attack the U.S. Capitol on Jan. 6.

The lead impeachment manager Rep. Jamie Raskin, D-Md., argued that the case against Trump "is based on cold, hard facts. It's all about the facts."

Raskin, a former 25-year constitutional scholar at American University, blasted the argument Trump and his legal team have made claiming he can't be put on trial after leaving office. He said this will create a "January exception" to the Constitution which would let a president to use "violent means" to try to "hang on" to power.

Raskin then introduced a video compilation laying out a timeline of the day's events, beginning with Trump's own words at a rally in which he falsely told supporters the election has been stolen before goading supporters to "fight like hell" or "you’re not going to have a country any more." The video splices Trump's own words with jarring imagery of rioters overrunning Capitol Police officers and then breaching the Capitol building.

The House impeachment managers, who will act as the prosecutors during the trial, have made their way to the Senate chamber as the trial of former President Donald Trump got underway.

The Senate Chaplain began the proceedings by reciting a prayer with the themes of good versus evil and truth over falsehood. It was followed by the Pledge of Allegiance.

The Acting Sergeant at Arms, Jennifer A. Hemingway, opened the trial with the proclamation: "Hear ye, hear ye, hear ye. All persons are commanded to keep silent on pain of imprisonment while the House of Representatives is exhibiting to the Senate of the United States articles of impeachment against former President Donald John Trump."

House Democrats prosecuting the impeachment case against Donald Trump say in a final pre-trial brief the former president’s lawyers are trying to “shift the blame onto his supporters” as they argue he's not to blame for the Capitol insurrection.

The Democrats say the lawyers’ argument that Trump did not incite the Jan. 6 riot ignores Trump’s earlier false statements that there was widespread fraud in the election and his attempts to rally his supporters.

Trump’s team says he was protected by freedom of speech when he told his supporters to “fight like hell” to overturn his election defeat. It says Trump was using “fight” as a general term, not a direction to be violent.

Democrats say the Republican former president “knew that many of his supporters, agitated by his barrage of lies about a stolen election, were prone to violence."

The Democrats prosecuting the case this week plan to show videos of the riot and tell graphic and personal stories of the rioting, in which five people died.

Trump’s lawyers say they also will have video.

In their presentation, the managers will attempt to show that Trump spent weeks laying the groundwork for the Jan. 6 riot at the U.S. Capitol, and that after he saw what was happening "he incited it further," an aide said.

“Once they see that this President did in fact incite a violent insurrection in order to hold onto power, I think it very well may be the case that reluctant senators change their mind and vote to convict,” aides told reporters.

Asked what the new evidence may be, the aides would not give any details, telling reporters to "stay tuned."

Senate Impeachment Trial Kicks Off With an Effort to Dismiss

Tuesday’s proceedings will begin at 1 p.m. ET with a debate to dismiss the trial before it even begins. Trump’s lawyers have argued the trial is moot now that Trump is out of office, and 45 Senate Republicans have already voted once to move forward with an effort to dismiss the trial on those grounds.

The Senate will debate the constitutionality of the trial for four hours on Tuesday and then hold a vote on whether to dismiss it. The effort to dismiss is expected to fail, allowing arguments in the trial to begin on Wednesday.

Democrats point to the opinion of many legal scholars — including conservatives — who say the trial is valid under the Constitution. They point to an 1876 impeachment trial of a secretary of war who had resigned and note that Trump was impeached before he left office. Trump's lawyers dismiss that precedent and say language in the Constitution is on their side.