The House panel investigating the Jan. 6 Capitol riot exposed the lengths Trump and his enablers went to keep him in power and the extent to which his inner circle knew his case about a stolen election was bogus

To understand how Donald Trump’s desperation and lies became a potent danger to democracy, consider the ginger mints.

Mints featured in one of the absurdist but toxic episodes fleshed out in the Jan. 6 hearings, which now pause even as the Justice Department presses ahead on a parallel criminal investigation that it calls the most important in its history.

Here's how one conspiracy theory, in a dark sea of them, was born:

A mother-daughter team at a Georgia elections center shared the treat during a long election night. Someone videotaped them and chose to believe the mint mother gave to daughter was a USB port. Trump’s lawyer spread the accusation that the video caught the women using the device to try to corrupt the election against the president.

The Jan. 6 committee on Thursday showed outtakes from then-President Donald Trump's Jan. 7, 2021, speech, during which he repeatedly refused to say the election was over.

Frantic to stay in power, Trump ran with the lie. He attacked the mother by name, branded her a “professional vote scammer,” and soon vigilantes showed up at a family home to execute a “citizens’ arrest,” the committee was told. For the love of mints.

The episode fed into a web of fabricated stories, melting under scrutiny like snowflakes in a Georgia summer. The hearings illustrated how those stories fueled the anger of Trump's supporters across the U.S. and especially those who stormed the Capitol, many armed and out for blood.

Long before the committee called its first witness, scenes of the rampage had been burned into the public consciousness. What new information could possibly come from it? Plenty, it turned out. And as the inquiry continues, with more hearings planned in September, still more evidence is being gathered.

With seven Democrats working with two Republicans on the outs with their party, the committee did what Trump's two impeachment trials couldn't — establish a coherent story out of the chaos instead of two partisan ones clawing at each other.

The Jan. 6 committee on Thursday released never-before-seen footage of then-President Donald Trump taping his video address to the U.S. Capitol rioters, during which he ignored a prepared statement to deliver “off the cuff” remarks.

The panel exposed the lengths Trump and his enablers went to keep him in power and the extent to which his inner circle knew his case about a stolen election was bogus. Some told him that to his face; others humored him.

At every turn the hearings made clear Trump was willing to see the legislative branch of government and democratic processes in state after state consumed in the bonfire of his vanities.

He was told the rioters were out to find his vice president, Mike Pence, at the Capitol and hang him. And he was said to believe Pence deserved to be hanged.

A Secret Service official testified to the Jan. 6 committee that members of former Vice President Mike Pence’s detail feared for their lives during the attack on the U.S. Capitol.

Trump was told many of his supporters that day bore arms. He didn't “effing care."

“They’re not here to hurt ME,” he said, according to testimony.

The committee pinpointed a range of renegade if not criminal options that were floated in the White House as Trump and his allies contemplated an executive order to seize voting machines and other steps that democracies don't take.

“The idea that the federal government could come in and seize election machines, no,” Pat Cipollone, the White House counsel, said as he recounted a White House meeting that devolved into a screaming match. “I don’t understand why we even have to tell you why that’s a bad idea for the country.”

Radio chatter from the security detail for Vice President Mike Pence shows the concern they had to get Pence to safety during the Jan. 6 riots.

Trump leaned on Republican-led states to find more votes for him and or appoint fake electors. He hectored Pence to do what he didn't have the power — or the will — to do, when called upon to certify the election.

When all else failed, Trump told his supporters to “fight like hell” and encouraged them to march down to the Capitol, saying he’d be joining them.

Trump's plotting was foiled by Republicans in the states that mattered, conservative aides, bureaucrats and loyalists-to-a-point who ultimately said no to him.

When Trump pressed his vice president to derail the certification of Joe Biden's election, Pence said no.

The Republican election official in Georgia said no to cooking the results to deliver Trump the state. The Republican House speaker in Arizona, pressed to appoint fake electors, invoked his oath and said no way.

Two Justice Department leaders in succession said no to him. When he moved to appoint a compliant third, Justice officials told him in the Oval Office that if he did so, they would quit and the new man would be left "leading a graveyard.”

All of that left the president with an inept cadre, mostly of outsiders. One sells pillows.

An anonymous White House security official who worked on Jan. 6, 2021, talks about the fear and shock they felt at the potential of former President Donald Trump marching tens of thousands of people to the U.S. Capitol.

Attention now shifts to the Justice Department, where Attorney General Merrick Garland says its criminal investigation of the matter is its most important ever.

Some legal experts have identified a range of potential crimes for which the ex-president might conceivably be prosecuted. Corruptly obstructing an official proceeding. Conspiracy to defraud the U.S. Inciting a riot. Even seditious conspiracy.

But these crimes are easier to talk about than to prove beyond a reasonable doubt, especially against a former president and one who might run again.

As the hearings unfolded, Democrats found themselves standing in admiration, if not awe, for the deeply conservative Rep. Liz Cheney, the poker-faced Republican on the committee who, despite her measured words, made clear her icy disdain for Trump and the many Republicans in Congress who appear to remain in thrall to him. 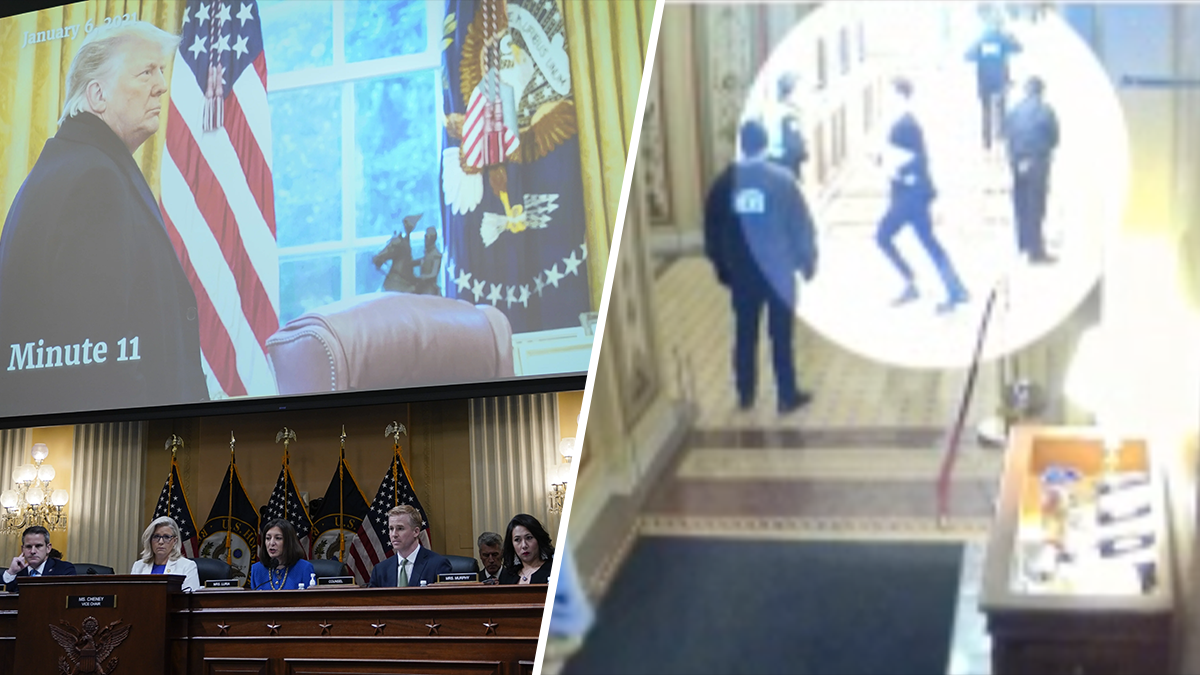 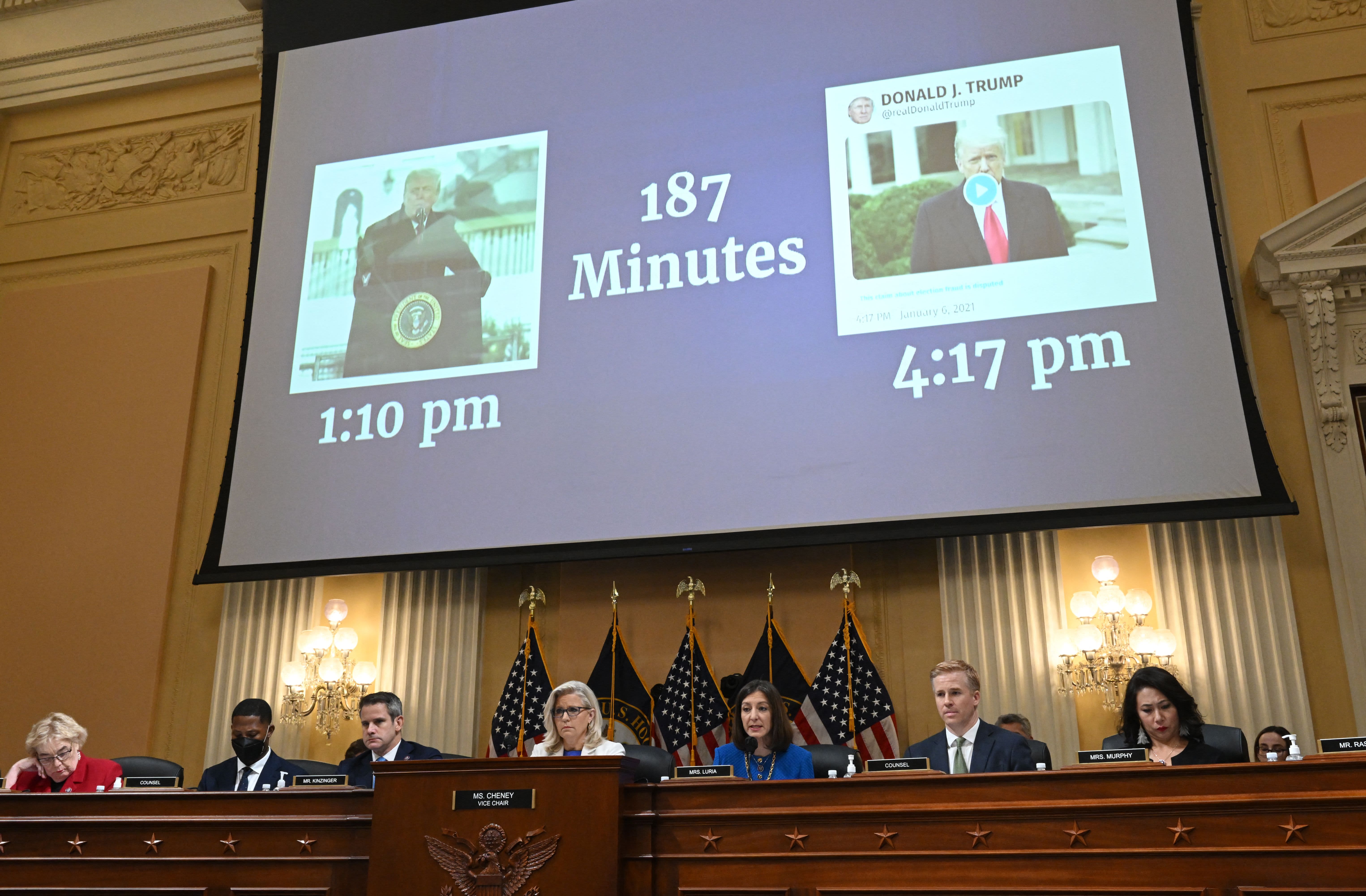 Trump's Inaction as Riot Unfolded and Other Key Takeaways From the Jan. 6 Hearing 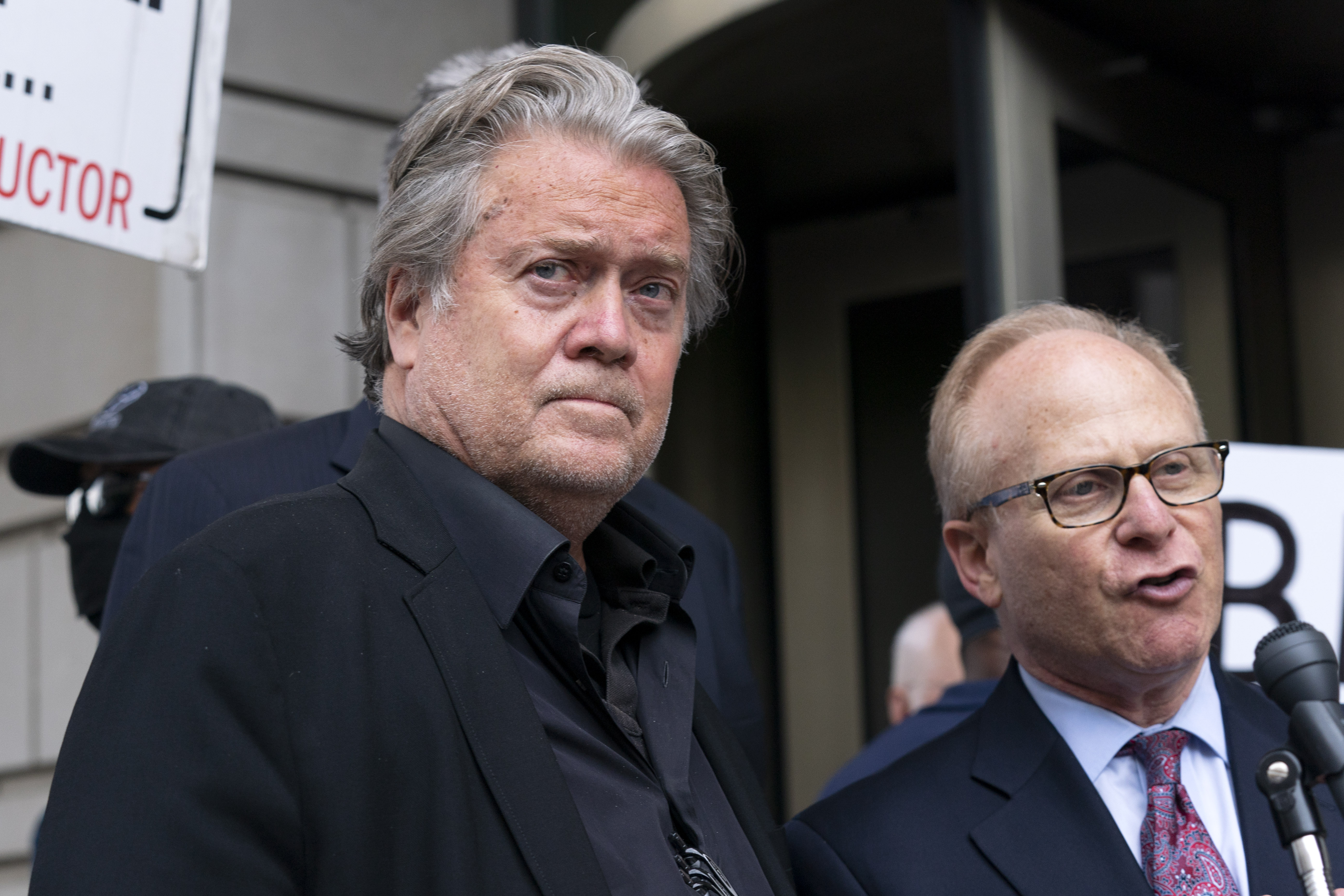 She did not countenance the Trump defenders who argued he was manipulated by outside “crazies."

“President Trump is a 76-year-old man," she said. "He is not an impressionable child. Just like everyone else in our country, he is responsible for his own actions and his own choices.”

Facing a Trump-backed primary opponent in August, her congressional seat in deep-red Wyoming in danger, she framed the stakes for fellow Republican lawmakers at the first hearing: “I say this to my Republican colleagues who are defending the indefensible: There will come a day when Donald Trump is gone, but your dishonor will remain.”