Many current MLB umpires have Kentucky roots, and Umps Care Charities is setting up a fund to help those affected in the area, Tripp Gibson says

Tripp Gibson was on the treadmill at his house near Seattle, a solid workout before heading to a holiday party with his wife.

To pass the time Friday afternoon, the Major League Baseball umpire was chatting on the phone with dad, just catching up on things back in his hometown.

His hometown of Mayfield, Kentucky.

Suddenly, as his father spoke, Gibson heard a tornado warning siren go off in the background. It was a familiar sound from his childhood days — as a kid, he once saw a small twister skip over his yard.

Three hours later, Gibson got an urgent message from his sister: Tornado’s hitting, Dad’s taking cover in the bathroom.

Fortunately for Gibson, no one in his immediate family was hurt in the storms that devastated the city of about 10,000 in the southwest corner of the state and surrounding area.

Allison Rogers has seen tornado damage before in her career, but the damage in Mayfield, Kentucky brings back memories of one of the worst storms the U.S. has seen - Hurricane Katrina, which destroyed her Mississippi hometown in 2005. Rogers, a meteorologist at WLWT in Cincinnati, Ohio, shows us the scene in Kentucky and explains how the National Weather Service will review the damage to determine just how strong those destructive tornadoes were on the EF scale.

By Saturday, after a flight from Seattle to Atlanta to Nashville and a two-hour drive, Gibson was back in the town where he spent most of his life.

“It’s indescribable,” he told The Associated Press on Monday from Mayfield. “You think of the movie ‘Twister’ and that’s nothing compared to what we have here.”

“All the people injured, displaced, maybe dead,” he said. “There are no words.”

At least eight people working at a Mayfield candle factory were killed, and not every local resident has been accounted for yet. Kentucky Gov. Andy Beshear said Monday that at least 74 had died statewide.

Figuring out where things were in Mayfield is nearly impossible, the 40-year-old Gibson said.

“I’m coming down roads that I’ve driven thousands of times and there’s nothing there,” he said. “You don’t even know where you are.

“Places that you landmarked as a kid, they’re gone. There are no road signs. I don’t even know where 6th Street and 7th Street and 8th Street are anymore,” he said. 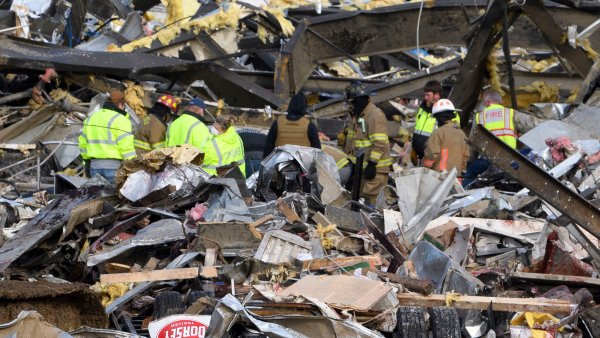 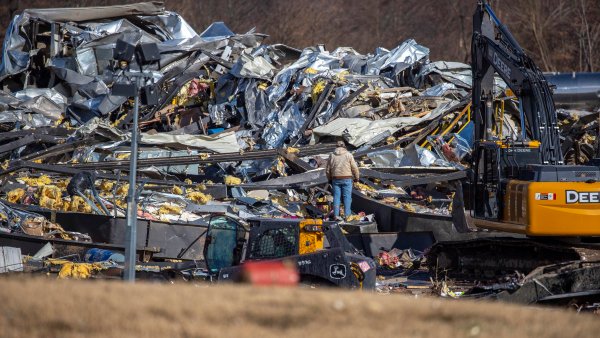 At one point, his late grandfather owned almost all of the land around Courthouse Square.

“I spent one summer painting every building there by myself, up on three levels of scaffolding. I knew every inch of downtown,” he said. “Now, it’s hard to see.”

As a boy, Gibson remembered Bruce Willis coming to town to shoot “In Country,” a 1989 movie based on a novel by Mayfield native Bobbie Ann Mason. Willis enjoyed spending time with Gibson’s father, Hoot, and some scenes were filmed on family property — Willis and his then-pregnant wife, Demi Moore, took a picture with young Tripp.

Gibson’s father and stepmother, Marietta, live about two-tenths of a mile from downtown Mayfield. They sheltered at a friend’s house nearby when the tornado hit.

The family owns 100 homes in the Mayfield area, a business his grandfather, a U.S. Navy veteran, started in 1949 to partly help returning service members. Gibson said he and his dad visited about 25 of the houses on Monday.

“There are so many stories of survival,” Gibson said.

Gibson went to Graves County High School and graduated from Murray State before becoming a professional umpire in 2006. He worked his first MLB game in 2013, joined the full-time staff in 2015 and was on the crew for this year’s National League Championship Series between Atlanta and the Los Angeles Dodgers.

Umps Care Charities, formed by MLB umpires, is setting up a fund to help those affected in the area, Gibson said. Several other organizations are aiding in the efforts, and monetary donations for the Mayfield Graves County Tornado Relief Fund are being collected by Independence Bank in Fancy Farm, Kentucky.

After Tripp Gibson landed in Nashville, he met up with fellow umpire D.J. Reyburn for the drive to Mayfield, stopping along the way at a Lowe’s to pick up supplies.

Gibson said he planned to stay in Mayfield for a week, then return after Christmas.

“I get to go back to Washington, to my wife and two boys, I’m lucky,” he said. “The people here in Mayfield, that’s who I’m thinking about.”

The shock of what he saw will stay with him.

“I was concerned I could have an emotional-type breakdown. I don’t think I’ve been able to fully emotionally process it,” he said. “I don’t have time for it now.”