Globally, more than 78,000 people have been infected in 29 countries

South Korea’s president said Sunday that he was putting his country on its highest alert for infectious diseases and ordered officials to take “unprecedented, powerful” steps to fight a soaring viral outbreak that has infected more than 600 people in the country, mostly in the last few days.

In China, where hundreds more infections were reported for a total of about 77,000, President Xi Jinping described the situation as “still grim and complex. He called for more efforts to stop the outbreak, revive industry and prevent the disease from disrupting spring planting of crops and defended the ruling Communist Party’s response as “timely and effective” in a video conference with officials in charge of anti-disease work, according to the official Xinhua News Agency.

News of additional infections and deaths trickled in from across the globe over the weekend. Iran raised its death toll from the virus to eight -- the highest toll outside of China -- and officials in Japan said a third passenger infected on a cruise ship had died. While the number of patients worldwide is increasing, some virus clusters have shown no link to China and experts are struggling to trace where those clusters started.

The Iranian health ministry said there were now 43 confirmed cases in Iran, which did not report its first case of the virus until Wednesday.

In Italy’s northern Lombardy region, which includes the nation’s financial capital, Milan, the governor announced Sunday that the number of confirmed cases in the region stood at 89. Italy now has 132 cases, including two deaths.

Venice, which is full of tourists for Carnival events, reported its first two cases, said Veneto Gov. Luca Zaia, whose region includes the lagoon city. It wasn't immediately known if the two infected had participated in Carnival festivities.

South Korean President Moon Jae-in said his government had decided to increase its anti-virus alert level by one notch to “Red,” the highest level. The step was last taken in 2009 to guard against a novel influenza outbreak that killed more than 260 people in South Korea. Under the highest alert level, authorities can order the temporary closure of schools and reduce the operation of public transportation and flights to and from South Korea.

Moon’s education minister, Yoo Eun-hae, said later Sunday that the new school year for kindergartens, elementary, middle and high schools in South Korea has been put off by one week and will start on March 9.

Moon said that the outbreak “has reached a crucial watershed,” and that the next few days will be “critical.” “We shouldn’t be bound by regulations and hesitate to take unprecedented, powerful measures,” he said.

Mainland China reported 648 new infections for a total of 76,936. The daily death toll fell slightly to 97. In all, 2,442 people have died in the country from COVID-19, the disease caused by the virus.

The number of new Chinese cases has seesawed daily but has remained under 1,000 for the past four days. Several changes to how the infections are counted, however, have made it difficult to draw conclusions from the figures. 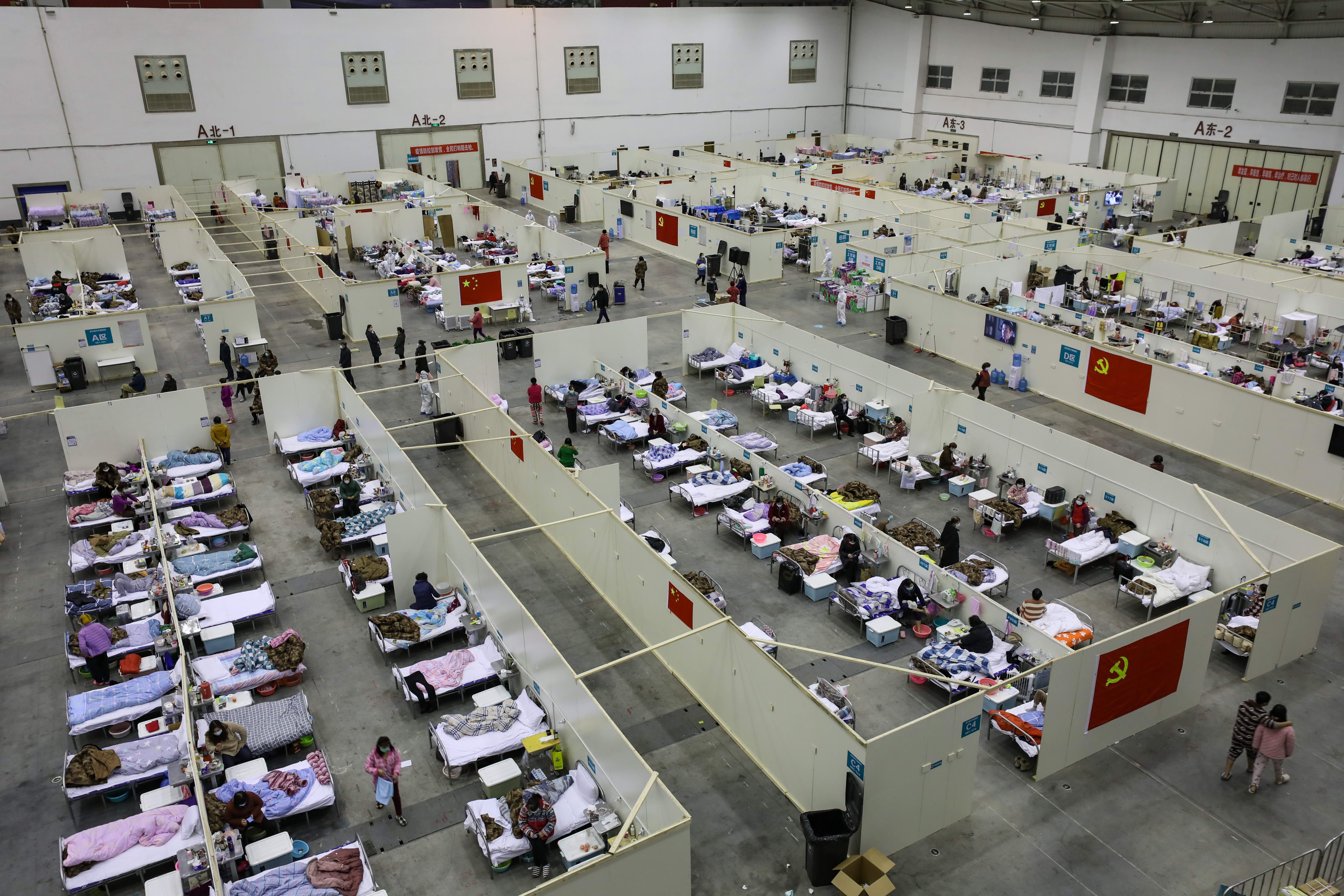 The central Chinese city of Wuhan and other parts of Hubei province, where the outbreak first emerged in December, remain under lockdown. More than 80% of the country's cases are in Hubei, where the death toll has also been higher than in the rest of the nation.

Most of the South Korean cases have been reported in the country's fourth-largest city, Daegu, and the surrounding area. According to the Korea Centers for Disease Control and Prevention, some 320 cases have also been confirmed to have links to a branch of the local Shincheonji church in Daegu, which has become the biggest cluster of viral infections in South Korea.

Shincheonji, which has been viewed as a cult movement by mainstream Christian organizations, tried to defend itself from growing public anger directed at the church.

In a video statement posted on its website, church spokesman Simon Kim said Shincheonji has shut down all its 1,100 local churches and other facilities since one of its church members tested positive for the virus on Feb. 18, the first patient in Daegu.

Earlier Sunday, Daegu Mayor Kwon Yong-jin said there were concerns that the number of those infected in the city could see yet another massive increase because authorities were launching intensive examinations of church members with virus-related symptoms.

China's Politburo, made up of senior officials of the ruling Communist Party, cautioned Friday that while the epidemic has been "preliminarily contained," the country has yet to see a turning point.

Officials signaled that regular activities should gradually resume after the virus prompted an extension of last month's Lunar New Year holiday. Many workplaces have opted to have their employees work remotely, and schools are conducting online classes.

In Beijing, most residential communities have implemented "closed management," limiting the number of people per household who can go in and out using exit-entry cards and requiring those just returning to the Chinese capital to isolate themselves at home for 14 days.

A cluster of infections was reported out of Beijing's Fuxing Hospital. The facility, which has 34 confirmed cases, has been closed off to protect the surrounding community, said a statement from Xicheng district authorities.

More than 500 cases also have been found in prisons across the country.

Meanwhile, a diplomatic row erupted after Israel turned back a South Korean airliner, underscoring fear and tensions over the fast-spreading outbreak.

A Korean Air flight with 188 passengers that landed at Tel Aviv's Ben Gurion airport Saturday evening was taxied away from the allotted terminal while authorities allowed only 11 Israelis to enter the country. The plane returned to South Korea with the rest of the passengers on Sunday, according to airline officials.

Seoul’s Foreign Ministry said Sunday that it was closely monitoring the incident and providing active consular assistance to South Koreans staying in Israel. It said it will evacuate South Korean tourists from Israel if necessary.

Yonhap news agency cited South Korea's Foreign Ministry as registering a strong protest with the Israeli government. The ministry told Israel that no excessive, unreasonable measures should be taken against South Korean nationals, according to the report.

South Korea earlier informed Israel that a group of tourists who traveled to Israel and the West Bank for a week this month tested positive for the virus upon returning home. Israeli and Palestinian health authorities asked people who were in close contact with the tourists to quarantine themselves.

South Korean health authorities said Sunday that 18 of the 39 South Koreans from the southeastern region who had made a group pilgrimage to sites in Israel later tested positive for the virus. She said the 21 others were being tested. Forty-one Catholic churches in their neighborhoods halted Sunday Masses and other gatherings.

Downtown Daegu was mostly deserted Sunday, with shelves at some supermarkets and stores empty. Many restaurants, bars, real-estate offices and tour agencies shut down as traffic nosedived and people stayed home, ordering food and supplies online.

Kim Mi-yeon, who opened her cake shop in Daegu on Sunday despite worries about infection, said she received only one group of customers.

“I’m also worried about being infected, but I still opened my shop today to make a living,” she said by phone. “On weekends, I used to hire five part-time employees, but I've recently told all of them not to come. How can I hire them at a time when I have fewer then 10 customers a day?”