Breonna Taylor’s family demanded Friday that Kentucky authorities release all body camera footage, police files and the transcripts of the grand jury proceedings that led to no charges being brought against police officers who killed the Black woman during a raid at her apartment.

The grand jury decision disappointed and angered those who have been calling for justice for Taylor for six months, and protesters vowed to stay in the streets until the officers involved are fired or someone is charged with her killing.

On Friday evening, a diverse group of demonstrators, including Taylor's mother, marched through Louisville. Protesters streaming through the street encountered a line of police in riot gear who fired flash bang devices to turn them back ahead of a nighttime curfew, but it wasn't clear why.

Earlier, Taylor's lawyers and family expressed dismay that no one has been held accountable for her death. 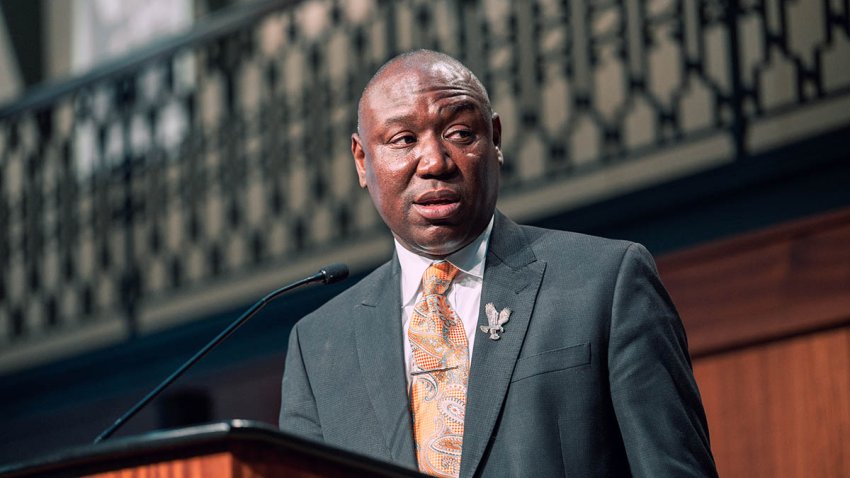 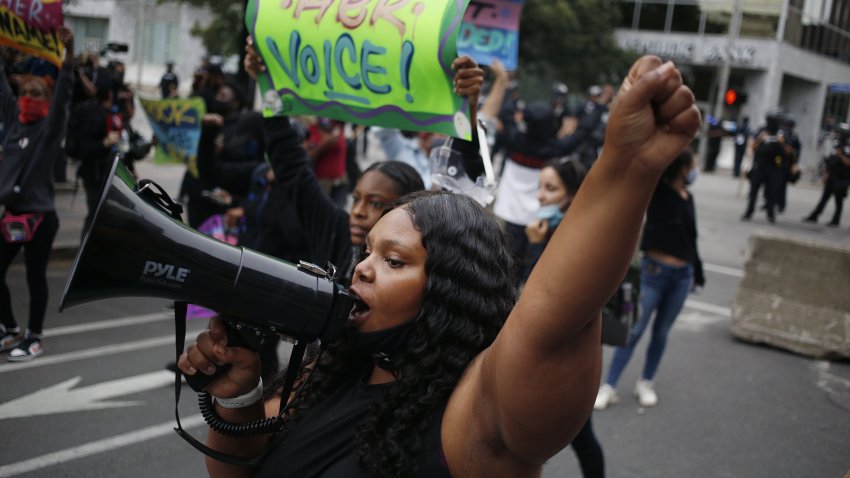 “I am an angry Black woman. I am not angry for the reasons that you would like me to be. But angry because our Black women keep dying at the hands of police officers — and Black men," Taylor’s mother, Tamika Palmer, wrote in a statement read by a relative. She stood close by wearing a shirt reading “I (heart) Louisville Police” with bullet holes in the heart emoji.

In her statement, Palmer said the entire justice system had failed her, and state Attorney General Daniel Cameron was just the final person in the chain that included the officer who sought a no-knock warrant as part of a drug investigation, the judge who signed it, and the police who burst into Taylor's apartment. The warrant was connected to a suspect who did not live there, and no drugs were found inside.

Taylor was shot multiple times by white officers after her boyfriend fired at them, authorities said. He said he didn’t know who was coming in and fired in self-defense, wounding one officer. Cameron, who is the state’s first Black attorney general, said the officers were not charged with Taylor's killing because they acted to protect themselves.

The grand jury indicted one officer on endangerment charges, saying he fired gunshots into a neighboring home that did not strike anyone. He has been fired.

“I hope you never know the pain of your child being murdered 191 days in a row,” said Bianca Austin, who wore her niece's emergency medical technician jacket as she read Palmer’s statement.

The gathering in a Louisville park that protesters are now calling “Injustice Square” ended with butterflies released by Taylor’s younger sister.

An attorney for the family, Sam Aguiar, said that since Cameron is done investigating, all the videos should be released, noting that he has seen dozens in full, most of which are not public.

Cameron “got so much wrong. We’ve seen so much piecemeal stuff come out throughout the case,” he said. He did not give specifics.

A Kentucky grand jury has decided not to indict any of the police officers involved in the fatal shooting of Breonna Taylor with homicide or manslaughter, but that doesn't mean there can't be additional charges in the future to hold the officers responsible for her death. Attorney Michael Starr Hopkins explains that federal charges could still be possible under a Biden Administration.

Gov. Andy Beshear, a Democrat, has also called on Cameron, a Republican, to release what evidence he can.

Cameron said through a spokesperson that he understood the family's pain.

“Everyone is entitled to their opinion, but prosecutors and Grand Jury members are bound by the facts and by the law,” spokeswoman Elizabeth Kuhn said in a statement.

As Taylor’s family decried the handling of the case, a man accused of shooting at police during protests Wednesday appeared in court. Two officers were wounded and were expected to recover.

A not-guilty plea was entered for Larynzo D. Johnson, 26, and bond was set at $1 million. Attorney Zac Meihaus called the streets “a war zone” when the shooting happened and said it is difficult to “pinpoint” if Johnson fired the shots in question. A prosecutor replied that a gun was recovered from Johnson, and there are video and witness accounts of the shooting.

Taylor's case has become a rallying cry for protesters nationwide who are calling out racism and demanding police reforms. While the FBI is still investigating whether police violated Taylor’s civil rights, the burden of proof for such cases is very high.

On Friday, protesters marched through Louisville with a purple banner bearing Taylor's name. They danced and chanted “bow for Breonna.” Some handed out pizza or water. As they gathered, some people tried to register voters.

Juanita Baker, an attorney for Taylor’s family, said she hopes the size and diversity of the crowd sends a message to political leaders that they are serious about their demands for change.

“Solidarity is needed, there is power in numbers,” she said. “These are the people voting you in or out of office, or who will one day run against you. You better take note.”

One protester, Victoria Gunther, was so outraged she traveled more than 600 miles (965 kilometers) from Reading, Pennsylvania, to take to the Louisville streets in solidarity. She had a T-shirt made with Taylor’s name.

“I’m a Black woman — that could have been me, that would have been my family,” she said. “We are disrespected and disregarded. They think we don’t matter. That’s why I’m here, to say we do matter.

The protest at one point ended up in the Nulu neighborhood of hip galleries and shops where there's been friction in recent months between the movement and the neighborhood. A number of businesses display “Black Lives Matter" and “Justice for Breonna" signs, but protesters on Friday shouted that those aren't enough and that it's time to act to help the Black community.

The police presence Friday night was light until protesters neared the city's East Market section, a few blocks from the banks of the Ohio River. About a dozen police cruisers were parked under a highway overpass and officers with clubs and face shields formed a semi-circle blocking the path of those gathered.

At least 24 people were arrested in the Louisville protests Thursday night that authorities said resulted in some vandalism. Among those arrested was state Rep. Attica Scott, a Louisville Democrat, who said she was detained minutes before a curfew started as she headed toward a church where protesters were congregating.

“It’s clear that this alphabet soup of law enforcement that’s here in Louisville, both local, state and federal law enforcement, are preparing for battle, for war against the people they are supposed to protect and serve,” Scott said Friday after spending the night in jail.

The curfew in Louisville will continue through the weekend, and the governor called up the National Guard for “limited missions.”

Hudsbeth Blackburn is a corps member for the Associated Press/Report for America Statehouse News Initiative. Report for America is a nonprofit national service program that places journalists in local newsrooms to report on undercovered issues.