A woman who allegedly took part in a pair of South Bay road rage incidents, including one in which her boyfriend allegedly shot a man at a Chula Vista intersection, pleaded not guilty Monday to charges that include attempted murder.

Serenity Renee Nieblas, 19, was initially arrested and bailed out in connection with the May 4 shooting at the intersection of Olympic Parkway and Town Center Drive. 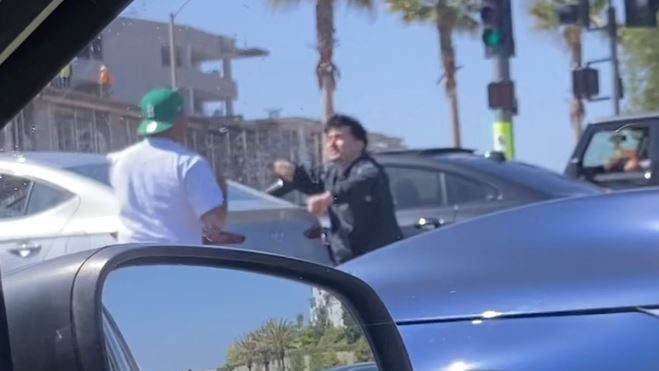 Prosecutors allege that following that incident, investigators learned that Nieblas and her boyfriend, 19-year-old Gillio Calais Repetto, were also involved in a similar February road rage incident in the Eastlake area.

A defense attorney argued Monday for Nieblas, who is pregnant and nearly ready to give birth, to remain out of custody on home detention with GPS monitoring and reside with her mother. But San Diego Superior Court Judge Garry Haehnle ordered that she be remanded to custody until she can be fully screened for the County Parole and Alternative Custody program, or CPAC, a process that can take several weeks.

Prosecutors allege that in both incidents, Nieblas was the driver and Repetto was a passenger.

A man was shot twice on May 4 at about 10 a.m. on Olympic Parkway and Town Center Drive in Eastlake, reports NBC 7's Priya Sridhar.

On Feb. 16, a road rage incident led to Repetto and a male driver of another vehicle getting out of their cars to fight on the side of the road.

According to Deputy District Attorney Allen Brown, the victim got Repetto onto the ground, then was hit in the back several times by Nieblas. Though the victim initially believed he'd only been hit by the woman, he later discovered he'd actually been stabbed eight to nine times, Brown said.

Then on May 4, Brown alleged that Nieblas' car and another vehicle were apparently racing each other for some time before stopping at the intersection of Olympic Parkway and Town Center Drive, where the prosecutor said Repetto and the victim got into a fistfight.

Four gun shots can be heard in the video. NBC 7's Artie Ojeda has more from the witness.

At some point, Repetto reached for his waistband and said "words to the effect of 'I'll kill you,"' according to Brown. Later, Repetto got back into his girlfriend's car and Brown said he allegedly opened fire while in the car, which sped off.

That victim, a 34-year-old Chula Vista resident, was shot twice in the bicep and hand.

Repetto, who remains in custody, pleaded not guilty last week to attempted murder and other charges.