A former La Mesa Police Department officer whose controversial arrest of a Black man set off protests for racial justice last spring has been found not guilty of falsifying a police report.

The trial for ex-officer Matthew Dages came to an end Friday when the jury acquitted him of the felony charge. Minutes after leaving court, Dages could be seen hugging loved ones and celebrating with family.

The charge stems from the on-camera May 27, 2020 arrest of Amaurie Johnson, which was widely shared on social media. In the video, Dages is seen approaching Johnson as the man waited for his friends to pick him up near the Grossmont Trolley Station.

Bystander footage of the confrontation captured the tension as things escalated. Dages is then seen pushing Johnson down before arresting him for "resisting and assaulting an officer" -- charges which were later dropped. That video, coupled with the murder of George Floyd, fueled protests in La Mesa that same weekend. 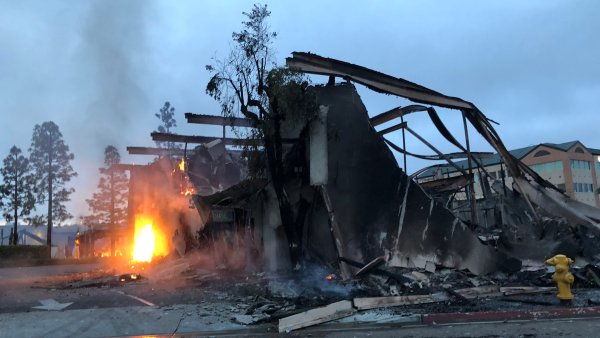 Dages' defense attorney Joshua Visco said the jury did the right thing and the "not guilty verdict shows that the district attorney should've never prosecuted this case in the first place."

Yusef Miller with the Racial Justice Coalition of San Diego disagrees and says at the root of the case, race is the issue.

After the verdict was delivered to the courtroom in La Mesa, NBC 7's Priya Sridhar spoke to residents of the community about their reaction to the case.

"People of color have a high rate of contact even if they haven’t done anything, so we see this, this unnecessary contact as a pretext to find some crime that a Black person is doing. The only crime that Amaurie had in the minds of some law enforcement officers is being Black in public and we believe this is an example of this.”

Prosecutors said Dages accused Johnson of smoking on the platform then later lied about the controversial arrest in his police report.

In his testimony, Dages said he left things out of the report that he did not feel needed to be in there, like that Johnson called his friends to confirm he was waiting for them at the trolley stop. He also said it was a mistake not to turn on his body-camera but affirmed that he did believe Johnson was smoking on the trolley platform.

"The area which he was standing was odd. I don’t see many stand there at the garage entrance, and the observation I made was I believed he was smoking," Dages testified. "Then, Mr. Johnson’s demeanor and lying to me off the bat was pretty big red flags."

Johnson was never charged with smoking on the platform -- which he was initially stopped for -- and all other charges for Johnson were eventually dropped.

Community activist Tasha Williamson said La Mesa is ready to move on from the incident.

"We expected nothing less than [Dages] getting a jury that would find him innocent," Williamson said. "La Mesa is moving forward, but I think La Mesa needs to know that the eyes are watching them and they think some of the things La Mesa is doing is just for show."

Dages was charged for lying on a police report in January. He pleaded not guilty in March.

The ex-police officer was fired from the department following the allegations, to which Dages responded by filing an appeal request to get his job back. Visco said, now that the trial is over, Dages will continue his fight for his policing job.

Johnson has also filed a federal lawsuit against the city of La Mesa and Dages, alleging negligence, excessive force and violence due to his race.

"The criminal court's acquittal of Mr. Dages does not overturn his employment dismissal," said City of La Mesa Spokesperson Perri Storey. "Mr. Dages is currently challenging that dismissal in a lawsuit he previously filed in civil court."