The crimes in question included assault, abuse of power, money, murder and hate crimes. Let's take a look back at the top six cases and trials in San Diego County in 2019.

After years of investigations and accusations, the case against U.S. Rep. Duncan Hunter came to an end in 2019.

On Dec. 3, the representative for California’s 50th congressional district pleaded guilty to misusing $150,000 in campaign funds for his own personal expenses.

“I failed to monitor and account for my campaign spending. I made mistakes and that’s what today was all about. So, that being said, I’ll have more statements in the future about the future,” Duncan Hunter said.

He later announced his resignation.

“Shortly after the Holidays I will resign from Congress. It has been an honor to serve the people of California’s 50th District, and I greatly appreciate the trust they have put in me over these last 11 years,” the congressman said in a statement.

Duncan Hunter will be sentenced in March 2020; he could face up to five years in prison.

Duncan Hunter’s wife, Margaret Hunter, pleaded guilty to one count of conspiracy on June 13. Prosecutors said she and the California lawmaker misspent $250,000 in campaign funds on everything from family trips to tequila shots.

In her plea deal, Margaret Hunter agreed to testify against her husband, but Duncan Hunter pleaded guilty before his case could go to trial.

Former congressman and Duncan Hunter’s father, Duncan L. Hunter, spoke with NBC 7 in support of his son after his guilty plea was announced. The more senior congressman repeated that the importance of his son’s conviction was that 59 of the 60 charges were dropped.

NBC 7's Alex Presha is joined by former congressman Duncan L. Hunter to give their side of the story about Duncan Hunter's trial.

Navy SEAL Chief Eddie Gallagher was photographed holding up the head of a dead teen Islamic State fighter by the hair while clenching a knife in his other hand. The circumstances around the photo appeared to divide the military community, even prompting President Donald Trump to act.

In a WhatsApp group comprised of a secret subsect of Navy SEALs, messages claimed Gallagher stabbed a wounded Islamic State captive in his care and shot civilians in Iraq in 2017.

Those claims later evolved into a formal investigation.

Gallagher was then charged with premeditated murder of a male ISIS detainee by stabbing, obstruction of justice by attempting to discourage members of his platoon from reporting his actions, attempted premeditated murder of a noncombatants by shooting, retaliation against members of his platoon for reporting his criminal actions, wrongful willful discharge of a firearm in circumstances to endanger human life, and wrongful posing for an unofficial picture with a human casualty.

He was found not guilty on all charges except wrongful posing for an unofficial picture with a human casualty.

Trump, who had previously restored Gallagher’s rank, denounced a new Navy administrative probe into whether Gallagher should remain in the elite SEAL corps.

“The Navy will NOT be taking away Warfighter and Navy Seal Eddie Gallagher's Trident Pin. This case was handled very badly from the beginning. Get back to business!” the president tweeted.

Richard Spencer, who was fired as Navy secretary for his handling of Gallagher's case, wrote that the commander in chief "has very little understanding" of how the American military works.

The case grew to become divisive in the military community. To read more on Gallagher’s war crimes trial, click here.

NBC 7's Jackie Crea has the details headed into what is expected to be the final day of the court-martial for Navy SEAL Chief Edward Gallagher.

John Earnest is accused of opening fire inside a Poway synagogue on April 27, 2019 -- the last day of Passover.

Earnest, who was 19 at the time of the shooting, allegedly used an AR-15-type assault weapon.

Security cameras inside the synagogue captured the entire, horrific scene as it unfolded.

The suspect then fled, but later called police to turn himself in, saying, “I just shot up a synagogue,” according to a court affidavit.

On May 9, Earnest was charged with 109 federal counts, comprised of 54 counts of obstruction of free exercise of religion and 54 counts of hate crime acts.

Earnest was also accused of setting fire to the Dar-ul-Arqam mosque in Escondido on March 24 before early morning prayer.

Then on May 21, a federal grand jury added four additional counts for discharging a firearm during crimes of violence, according to the Office of U.S. Attorney Southern District of California Robert S. Brewer, Jr.

Earnest is being tried separately and simultaneously for state and federal charges, including murder that is classified as a hate crime.

On Oct. 3, Earnest pleaded not guilty to all charges.

His trial is expected to begin in June 2020.

A judge decided that the Poway synagogue shooter will stand trial. NBC 7's Melissa Adan has the latest information.

The case against former San Diego County sheriff’s deputy Richard Fischer came to an end in December – four and a half years after women first came forward with claims of abuse.

The 33-year-old assaulted 16 women while on duty and in uniform, several of who had called the department for help or to report a crime. The string of abuse ranged from July 2015 to August 2017.

The plea agreement was finalized on the day the trail was scheduled to begin – which allowed Fischer to narrowly avoid a public trial.

On Dec. 11, he was sentenced to three years and eight months in local prison followed by 16 months of mandatory supervision that includes GPS monitoring. His time in custody could still be cut in half.

“Unfortunately, you disgraced your uniform,” presiding Judge Daniel Goldstein said. “The gravity of your offense is that you acted under the color of law, in uniform. You took advantage of victims, you took advantage of your position and isolated these victims."

Richard Fischer assaulted 16 women while on duty and in uniform, including women who had called the department for help or to report a crime, since 2015. NBC 7’s Nicole Gomez reports.

“Operation Varsity Blues” disgraced celebrities, sparked lawsuits, and ignited a heated discussion on college admissions in the U.S. The alleged $25 million cheating scheme was the result of a 10-month-long FBI investigation that charged 50 people, including at least two San Diegans.

The overview of the scam was that some parents would supposedly pay $200,000 to $6.5 million to get their children into elite universities as recruited athletes, even if they didn’t play sports, or help students cheat on their standardized college exams.

Elisabeth Kimmel of La Jolla is accused of paying $475,000 in bribes to get her children admitted into top-tier schools, including Harvard, Stanford, Georgetown and the University of Southern California.

Kimmel was arrested in March on felony mail fraud and money laundering charges.

She owns a luxury home above the Pacific Ocean and a condo in Las Vegas.

Toby Macfarlane of Del Mar was another parent in the scheme. He pleaded guilty in June to one count of conspiracy to commit mail fraud and honest services mail fraud after paying $450,000 to the scam’s admitted ringleader, Newport Beach businessman William Rick Singer.

On Nov. 13, MacFarlane was sentenced to six months in prison and ordered to pay a fine of $150,000, perform 200 hours of community service and be under two years of supervised release, according to the U.S. Attorney’s Office for the District of Massachusetts.

Singer told U.S. District Judge Ray Zobel, “I am absolutely responsible for it. … I put everything in place. I put all the people in place and made the payments directly.”

After hearing delays and deadlock jurors, the trial against former NFL player Kellen Winslow Jr. came to an end in 2019.

Winslow was convicted on multiple rape charges of multiple women, spanning as early as 2003. During the year-and-a-half of trials, Winslow initially pleaded not guilty – even calling the whole thing a “money grab” in October 2018.

However, the jury was deadlocked on the remaining eight charges.

On Nov. 4, during a retrial on those counts, Winslow pleaded guilty to raping an unconscious teen in 2003 and to sexual battery involving a 54-year-old hitchhiker.

In exchange for his plea, the court agreed to sentence him to between 12 and 18 years in prison for the two charges and dismiss the others. The plea also removed the possibility of life in prison.

At one point, Winslow could be heard saying, “I’m not thinking clearly.”

The judge then asked Winslow if he was sure, to which Winslow said he needed “a couple of minutes.” Eventually, Winslow accepted the plea deal.

Kellen Winslow Jr.'s defense team plans to argue that brain injury from his football career played a role in his actions. NBC 7's Artie Ojeda has the story.

A case that puzzled investigators for years reached a conclusion in 2019, as the suspect in the murder of an entire Fallbrook family was found guilty.

Charles "Chase" Merritt killed Joseph and Summer McStay along with their 3- and 4-year-old sons and buried their bodies in shallow graves in the Mojave Desert area in 2010, a jury found.

The McStays were believed to be missing in February 2010. A few days later, on Feb. 8, the family’s car was found near a parking lot near San Ysidro.

Then on March 5, deputies released a video of a group of people similar to the McStay family going hand in hand into Mexico through the pedestrian gate. The video dated Feb. 8 at around 7 p.m.

In April 2013, the San Diego Sheriff’s Department said the family went to Mexico voluntarily. However, seven months later, a motorcycle rider found the family’s remains in the northern Victorville desert.

In a case that puzzled investigators for years after the family members disappeared in 2010, Charles "Chase" Merritt was found guilty on four counts of murder. He sits somberly as a jury reads his verdict in a San Bernardino County courtroom on Monday.

Merritt, a former business associate of Joseph McStay, was arrested in 2014. He killed the McStays because he was embezzling thousands of dollars from Joseph McStay's custom fountain business, prosecutors said.

On Jan. 30, 2015, Merritt requested to represent himself, saying he only had six to eight months to live and cannot afford an attorney -- though he lived past those eight months.

After five months of testimony, the defense and prosecution concluded their closing arguments in the trial, and the jury found Merritt guilty on June 10.

On June 19, a jury recommended the death penalty for Merritt. 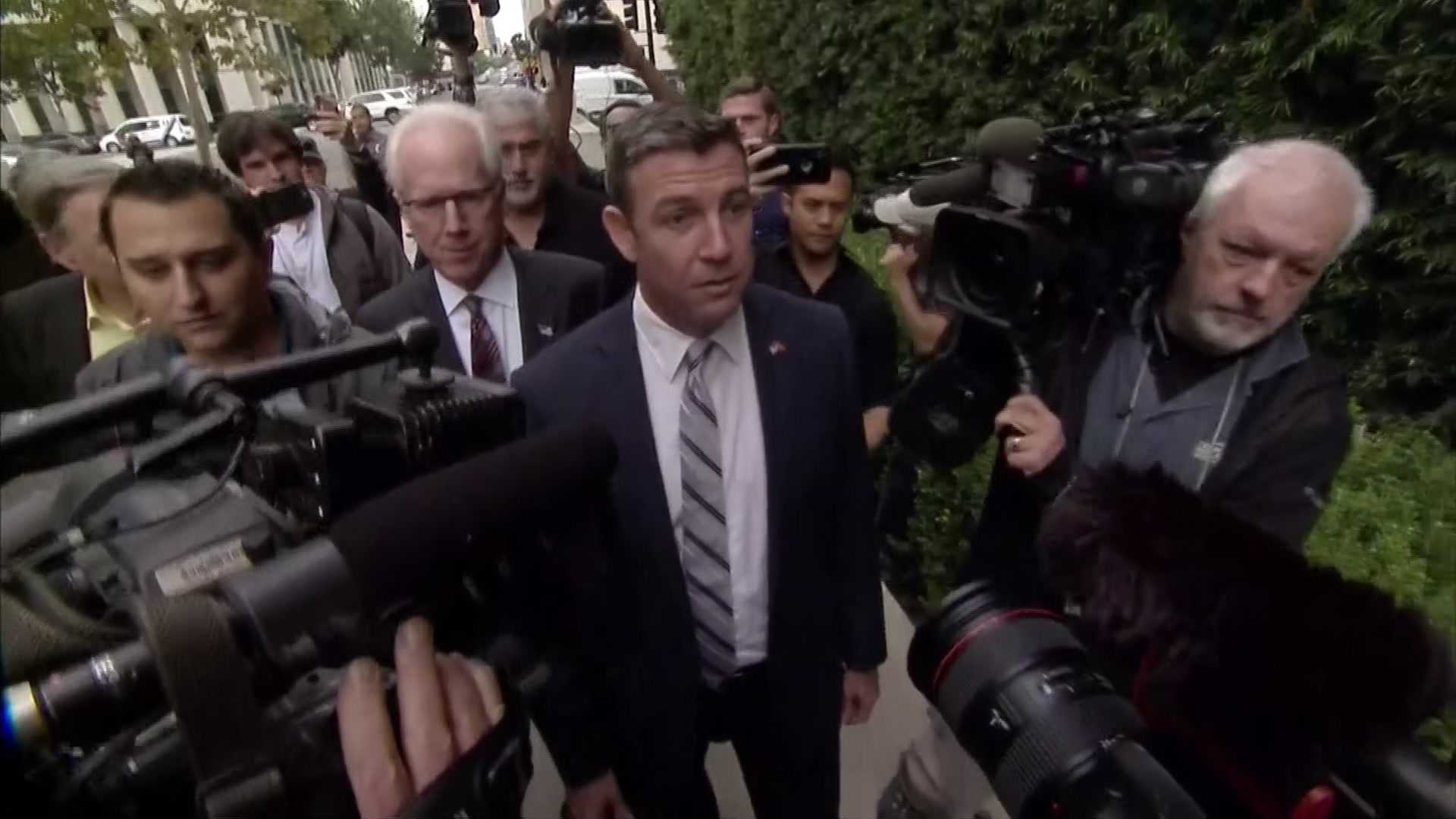