On Sunday, Torrey Pines Golf Course hosted the final rounds of public play before the United States Golf Association closed the course Monday to get ready for the June 17 U.S. Open.

Before Mickelson, McIlroy, Spieth and Koepka, it was Cochrane, Cotton, Seiler, and Schwegman.

Not exactly famous golfers, but they were pretty popular Sunday. This foursome had the highly coveted final tee time -- Sunday, June 6, at 2:40 p.m. -- before Torrey Pines closed to get ready for the U.S. Open. 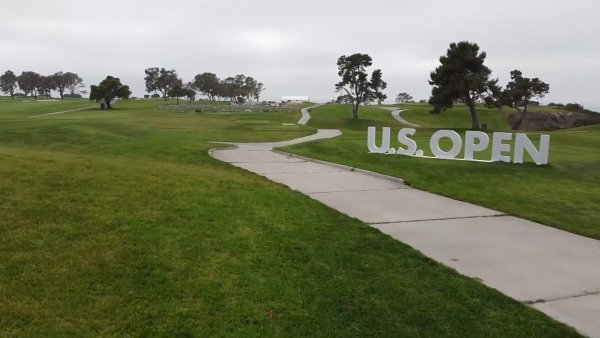 US Open Championship in San Diego: The Economic Impact

None of the four golfers knew they had the last tee slot until they arrived at the course.

"No idea, no idea," said Cochrane, a La Jolla business owner who called himself the "lucky fourth" member of the group.

So how did they get the prime spot?

It's turns out Seiler's wife got the tee time for him as a birthday present, and Sunday was his birthday.

"It's my birthday and I had no idea what I was signing up for, so I am very happy. My wife gets top marks for this one," he said.

It was kind of cool that Torrey’s final tee time went to four local golfers, not out-of-town tourists. All four of these guys live in San Diego.

The famed South course is shaping up to be a major challenge for the world’s best golfers, just as it was in 2008.

"It's definitely special to get this opportunity," said Schwegman. "You hope it's more than once, but it's not guaranteed, so take it where you can get it, that's for sure."

Cochrane called the group, "pretty lucky," adding "it's our home course, it's in championship condition, so it's very, very special."

"We pay the sunshine tax, we are lucky to live here and cannot express enough how cool it is to experience this level of course," Cotton said.

The local foursome had some wonderful shots as they made their way around the course and also experienced some traditional "Torrey Trouble" in rough that is already swallowing golf balls and will only get worse as the U.S. draws near.

There's no shortage of history associated with No. 18 at Torrey South. Scott Bentley, Interim Deputy Director for the city of San Diego’s Golf Division, takes us through the short par 5.

"The rough is no joke," Seiler said after spending some time in the thick grass.

Among the other rumblings heard from the greenside rough were, "It's deep and it's only getting deeper," and "That is just brutal, brutal golf right there."

Besides the rough, these golfers experienced all that makes Torrey Pines special; the gorgeous setting against the Pacific Ocean, terrific tee boxes and challenging golf shots. The course is just aesthetically awesome all the way around.

Just over five hours after their historic round began, with darkness setting in, the final foursome of the day made their way down the 18th hole. After a few approach shots and more than a few putts, did anyone want to volunteer their final score?

After a few funny comments about hitting the triple digits, Schwegman said it best: "It was more fun to NOT keep score today."

Totally agree, who cares about your golf score on a day like this. The most important part of this round was that these 18 holes will last a lifetime for these local golfers.

"I am going to brag about this for awhile, yeah people are going to hear about me being able to shoot a million on the last possible chance to play Torrey before the U.S. Open," boasted Schwegman.

Seiler simply said, "really honored to play that round."

As the clock on the Torrey Pines course crept past 8 p.m., Cochrane, Cotton, Seiler and Schwegman exchanged hugs and handshakes, then left the 18th green.

The Torrey Pines South Course was now empty, closed to the "average Joes" and ready for the PGA pros.