The Escondido Police Department said the handgun the suspect fired in the gun battle was an untraceable "ghost gun," and said he had two more untraceable weapons and hundreds of rounds of ammunition in his SUV

The Escondido Police Department said a suspect who was shot and killed by an officer last week attempted to fire at the officer with an unserialized handgun, or "ghost gun," and had two more untraceable guns and several hundred rounds of ammunition in his SUV.

Jonathan Carroll, 38, was shot following a pursuit through Escondido on Sept. 17. Carroll was wanted for allegedly shooting at another driver on Pennsylvania Avenue the same night, according to EPD.

After the car-to-car shooting, an Escondido officer spotted Carroll on the road and tried to pull him over. Carroll didn't stop and a pursuit followed, EPD said.

Escondido police shot and killed a suspect who is believed to be related to an earlier shooting, following a pursuit, EPD Sgt. Heath said.

Carroll eventually crashed as he turned right onto Encino Drive from Bear Valley Parkway. The pursuing officer, Officer Chandler Hoppal, who was the only officer engaged in the pursuit, positioned his vehicle behind Carroll's and within seconds Carroll exited his SUV with a gun in his hand, according to EPD. Carroll fired two shots from his handgun -- one hit his own car and the other was unaccounted for.

Officer Hoppal fired 12 rounds back, hitting Carroll in his head, body and arm, according to police. Carroll was taken to Palomar Medical Center where he was pronounced dead.

EPD investigators said the handgun Carroll fired was an unserialized "ghost gun," which means it can't be traced if used in a crime. They said they also found an unserialized handgun in the glovebox of Carroll's SUV, and an unserialized AR-style rifle and hundreds of rounds of pistol and rifle ammunition in his trunk.

Officer Hoppal was not injured in the incidednt and is currently on leave per department policy, EPD said. Footage from Hoppal's body-worn camera will be released within two weeks, EPD said.

What led up to the shooting?

The Escondido Police Department said Carroll shot at another driver before he made contact with police. The victim was a 20-year-old man who was shot in the back, according to EPD. The victim also had a 15-year-old passenger in his car.

Investigators aren't aware of any connection between Carroll and the victim, EPD said.

The victim called 911 and gave EPD a description of Carroll's white Mercedes SUV, and its license plate number. Police ran the plates and saw Carroll was the registered owner. Later that night, Officer Hoppal spotted Carroll driving near Carroll's home. 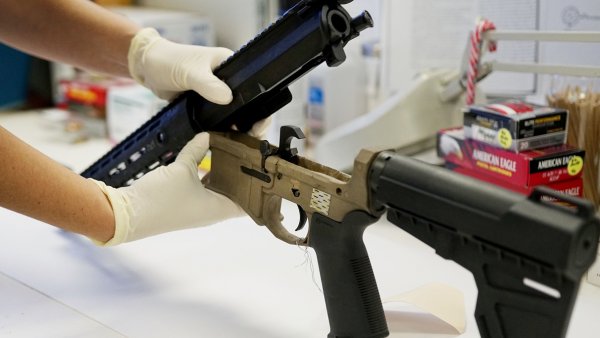 ENUF prohibits the sale, purchase, possession, receipt and transportation of non-serialized guns and parts. It also makes it illegal for unregistered gun kits to be sold in San Diego online and in stores.