After a shocked pause, Chris pokes his wife's pregnant belly and asks, "Is it real?"

The wife of a U.S. Navy sailor had a big surprise to share with her husband when his aircraft carrier docked in San Diego: a new member of their family, nearly ready to join their ranks.

Petty Officer 1st Class Chris Daugherty, a Navy cryptologic technician, returned to the U.S. on June 23 after a six-month deployment on board the USS Carl Vinson.

Upon disembarking, Daugherty's two daughters and son rushed over to greet their uniformed father. He hugged his little ones, who were clad in mini sailor outfits, while his wife, Natasha Daugherty, hung back, smiling.

She hid her stomach behind a large poster decorated with blue hearts and red paint spelling out "Welcome Home Baby Daddy." When Chris reached out for a hug, Natasha tossed the poster aside to reveal her nearly eight-months-pregnant belly. 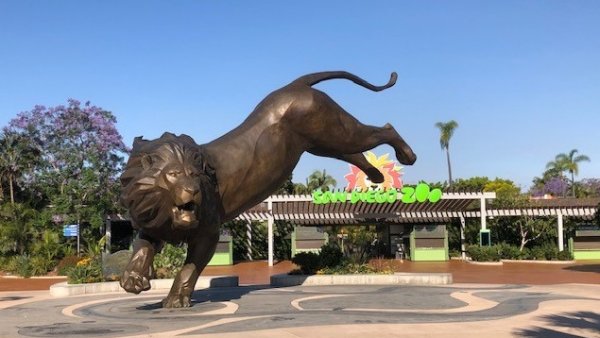 The big reveal was captured on cellphone video.

In the sweet clip, Chris drops his arms and looks down at his wife's belly. Eblazoned on her shirt are the words, "I am the present my daddy gave my mommy before he deployed." After a shocked pause, he pokes her belly and asks, "Is it real?"

While onlookers smile and laugh, Chris embraces and kisses his wife.

"Wanted to say thanks to my amazing wife Natasha for the awesome homecoming weekend she planned," said Chris, in a Facebook post. "I couldn't have asked for a better one, and it was great news finding out we will be welcoming a new baby girl soon."

The couple lives in Temecula, California, just north of San Diego County. Together, they have three children, a 10-year-old son, a 4-year-old girl and an 18-month-old toddler. Now, baby No. 4 will join the family.

On Wednesday, Natasha told NBC 7 that the hardest part of keeping her pregnancy a secret from her husband was the worry that came with thinking that something might happen to Chris during the deployment, especially as tensions rose with North Korea.

"As soon as we started having trouble with North Korea, I became worried," she said.

The USS Vinson deployed on Jan. 5 as part of the U.S. Pacific Fleet-led initiative to extend the command and control functions of the U.S. 3rd Fleet into the Indo-Asia-Pacific region. The strike group also patrolled the Korean Peninsula after North Korea began testing ballistic missiles. North Korea called the dispatch of the U.S. aircraft carrier toward its waters "outrageous."

Chris' deployment, along with other service members in the strike group, was extended for 30 days. He sent Natasha an email telling her how much he loves her, in case anything should happen to him.

"He was telling me goodbye. At that point, I was extremely emotional. I wanted to tell him, I wanted to freak out," said Natasha. "But I kept my calm and waited, just a little longer."

She says it was also a challenge to make sure her 4-year-old toddler didn't tell Chris about the pregnancy while talking on the phone.

Natasha said, "It was difficult but totally worth it in the end!"

Video of the reveal was posted on Facebook and had garnered over 3,800 views by Wednesday afternoon.