A sly fox broke into an Ocean Beach woman's home for an overnight stay this week, a rare sighting that has only happened a handful of times in San Diego County, according to officials.

Kessa Pellum awoke at about 4 a.m. Monday to her 25-pound French Bulldog sitting on her chest "barking ferociously" inside her home near Sunset Cliffs, she told NBC 7.

She at first thought nothing of it but, soon enough, the pup was chasing something around her living room. 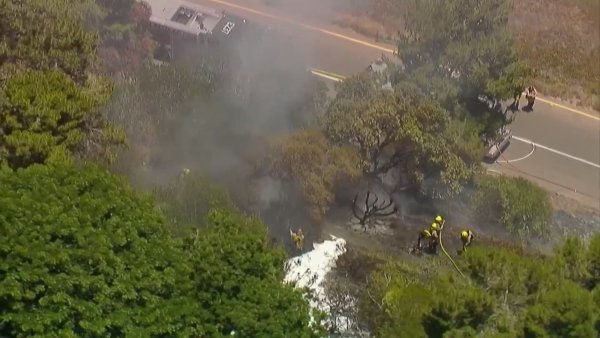 "I go to get up to go to bed and he sprints across the living room and I see that there is a creature in my living room and he's barking at it -- really, really upset," Pellum said.

The animal, which Pellum did not know was a fox, at first, darted into the master bedroom. Quickly, Pellum shut the door behind it and ran to the back of the home to open a sliding door that connect the bedroom to the backyard.

Her hope was that the animal would wander out on its own. Meanwhile, she hopped onto a computer and researched what the creature could be.

"I live in Ocean Beach so I didn’t think, like, a fox. I could also tell it wasn’t a domesticated type of pet. I knew it was wild," Pellum said.

But several hours later, there was no noise coming from the bedroom and her dog had calmed down; It had gone, she thought.

It wasn't until about 11 a.m. that she re-opened the door to the master bedroom.

"I had 100 percent assumed it had left and then I opened the bathroom and there it was staring at me," Pellum said. "The little fox is curled up in a little ball on the bathroom counter, like a cat, and it pops its little head up at me and I just retreat."

"I was rattled and just not thinking," she explained.

SDHS responded within 30 minutes and safely captured the animal -- a gray fox who was unharmed and healthy -- and released it back into the wild.

It was the first time SDHS had ever responded to a call about a fox in Ocean Beach and about the third time in their history the agency had responded to calls about foxes, Nina Thompson, a spokesperson for the SDHS said.

In April, the SDHS rescued a family of foxes from a construction site in Otay Mesa. The foxes, including several newborns, burrowed in a den inside rubble.

A fox was also sighted in Kensington in 2016, eventually entering a granny flat where SDHS were able to capture the critter, NBC 7 reported.

The fox is the smallest member of the dog family and don't often interact with humans, though they are known to seek out buildings for shelter, according to Los Angeles Animal Services. Three species are common in Southern California: the Gray Fox, the Red Fox and the Island Fox.