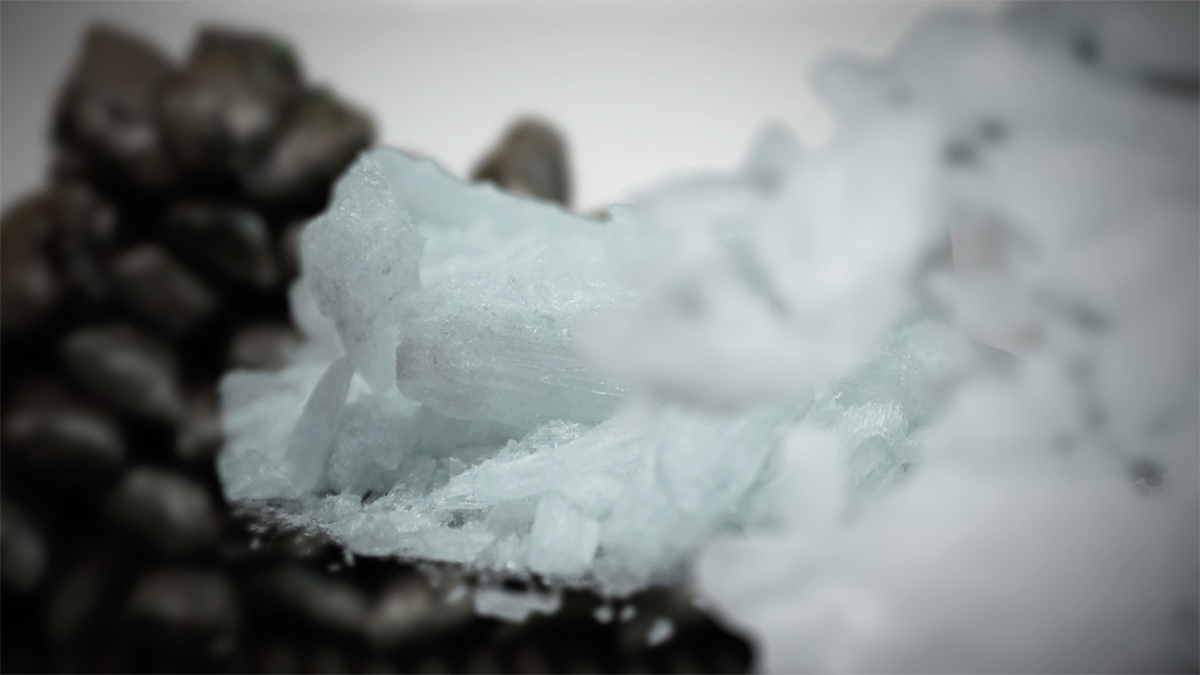 San Diego County is in the midst of a war with a familiar foe; methamphetamine. Once known as the “meth capital of the world,” drug enforcement agents now refer to the region as “ground zero” in the nation’s fight against meth abuse.

On April 18, 2019, a few minutes after midnight, two women were stopped at the San Ysidro Port of Entry while returning from a trip to Tijuana, Mexico. According to federal prosecutors, a Customs and Border Protection agent looked under the 2006 Ford Explorer that the women were in and noticed new bolts on the gas tank. Minutes later hidden inside the gas tank, agents found 53 packages, totaling 69 pounds of methamphetamine or “meth”.

Hours earlier, at the same border crossing, a man was traveling from Mexico when he was stopped by U.S. Border Patrol agents. A drug-detecting canine had alerted agents to the man’s 2007 Jeep Grand Cherokee. Hidden inside a spare tire, the seats, as well as the door panels were 20 packages of meth, weighing more than 110 pounds.

The drug seizures were just two out of a half dozen that occurred over the course of just one day, from April 17 to April 18, 2019, at the San Ysidro Port of Entry, the busiest land border crossing in the Western Hemisphere. During that 24-hour span, agents at the border crossing confiscated 246 pounds of meth coming from Mexico. An additional 102 pounds of meth was confiscated at two other border checkpoints elsewhere in San Diego County that same day.

The seizures provide a snapshot of what local law enforcement face in their day to day fight to address a surge in the amount of meth smuggled across the U.S. Mexico border. The surge has had ripple effects throughout the region, including an increase in meth-related deaths and crimes in cities and communities throughout San Diego County.

It is a new fight against familiar opposition.

In the late-1980s, San Diego County was a hotbed for methamphetamine use and production. So much so that law enforcement referred to the region as the “meth capital of the world.” The meth was manufactured inside dozens of makeshift meth-labs run out of abandoned homes and in rural areas.

In hopes of addressing the new drug epidemic, Congress passed the Combat Methamphetamine Act in 2005, a law that made it harder to obtain the ingredients used to manufacture meth. The law had a major impact on how meth was made. Soon after, the region and the country witnessed a shift in the production of meth from backyard labs to intricate Mexican super labs controlled by drug cartels. In recent years, Mexican drug cartels began flooding the border with an increasingly potent strain of meth.

The resurgence of meth into the region has led drug enforcement agents to refer to San Diego County as “ground zero” for the nation’s meth problem.

IN THEIR OWN WORDS

The amount of meth seized by law enforcement in San Diego County has grown exponentially in the last five years.

Inside a nondescript commercial building in the City of Vista, a DEA chemist uses a boxcutter to open a package wrapped in duct tape. Inside the package are meth crystals, some the size of a quarter, others as large as five-inches in diameter. The chemist pours the crystals onto his workbench. With a pestle and mortar, he grinds the crystal into a fine powder for a purity test.

The chemist, who wished to remain anonymous for security reasons, said the new batches of meth he and his staff have recently tested are purer than ever before.

“Five to ten years ago, it would look like I rolled it around in the mud a little bit,” the chemist said. “This is relatively pure methamphetamine, almost 100 percent pure.”

Stacked up against a wall in the lab are dozens of similar looking packages, all containing meth waiting to be tested. It is in this building where drugs, seized by federal law enforcement agencies from the entire Southwestern United States, get tested and later incinerated.

“It's changed significantly in the past five 10 years,” the chemist said. “So now we’re seeing a higher quality and higher purity than we did in the past.”

The purer the meth, the more dangerous it becomes and that has led to a record number of deaths.

In 1997, the San Diego County Medical Examiner’s office listed methamphetamine as a cause or contributing factor in the deaths of 60 people. By 2018, NBC 7 found 318 people died from meth-related causes -- an increase of 470 percent.

In more than half of the meth-related deaths from 1997 to 2018, the Medical Examiner detected meth along with another substance, such as fentanyl, heroin, or alcohol, as being a cause or a contributing factor in the person’s death.

The numbers are much higher, according to figures from the San Diego Meth Strike Force, a coalition of dozens of local, state, and federal law enforcement agencies that focuses on education and treatment of methamphetamine. The Strike Force says the numbers are higher when counting those who had meth detected in their blood system, even if the drug was not a contributing factor in the person's death.

In 2016, the Meth Strike Force estimated on average, a person died in San Diego County every 23 hours “because of meth.”

Marla Kingkade, a coordinator for the Meth Strike Force, told NBC 7 one-third of individuals admitted to public funded treatment programs are treated for methamphetamine misuse. The task force found the average age of someone using meth is 25-years-old or older.

The youngest person to die since 1997 was a 14-year-old girl from Escondido who overdosed on methamphetamine. A 78-year-old woman with heart disease, visiting San Diego from Baltimore in 2012 was the oldest. The analysis also found eight stillbirths caused by maternal meth abuse since 1997. The average age of a person who died from a meth-related cause in San Diego County is 46-years-old.

The high potency of the meth manufactured in superlabs across the border has made it easier for users to get hooked on methamphetamine. And in their quest to satiate their addiction, users can turn to crime in a distorted sense of reality.

Tommy Winfrey was one of those people.

He was born in Texas to an alcoholic father. His family relocated to Los Angeles, where he lived in a rough neighborhood. By the time he was 16, Winfrey was addicted to meth.

“I did this drug and it made me feel good for a change,” Winfrey told NBC 7 Investigates. “I kind of just went down a rabbit hole and got lost into that world. Everyone around me was addicted to meth, whether it was smoking it or shooting it up. Every day my life revolved around committing crimes. I was living on the fringes of society.”

By 19, Winfrey was in the throes of total addiction.

“I think that period of my life, there was about a year period where I slept maybe 30 days and all year. I was using a lot of meth every day.”

It was during one of the bouts of sleeplessness when Winfrey made the worst decision of his life. Winfrey, who was selling meth to support his habit, was armed with a gun when he confronted a man who owed him money.

In 1997, Winfrey was sentenced to life in prison, eventually ending up at California’s San Quentin Prison.

Winfrey believes prison saved his life. He went to therapy, earned three degrees, started writing, painting and learned computer coding through The Last Mile, a program that prepares inmates for successful reentry into society through business and technology training.

At a Parole Board hearing for Winfrey, Mark Remis, the Deputy Commissioner said, “You seem to have turned a corner. You have quite a lot of support from your programs you've been doing from prison. All of the letters of support from people in the community, other inmates too, which we don't see often."

Winfrey’s parole was granted under SB 261, a youth offender parole law that went into effect in January of 2016. Under a 2014 law, youth offenders who committed crimes before the age of 18, many of whom faced life sentences, became eligible for parole after serving 15 to 25 years behind bars. The 2016 amendment to the law includes people who committed their crimes before the age of 23.

Now married and in recovery, Winfrey works for the Children’s Initiative, an organization dedicated to underserved families. He specifically works on juvenile justice issues.

“I think we need more programs designed for youth that teach them emotional intelligence,” Winfrey said. “And I think that could help them regulate their emotions a lot better and not seek out substances like meth.”

Winfrey’s story resonates with thousands of San Diegans and their families struggling with substance abuse.

Elon Burns, a substance abuse counselor and recovering addict himself, believes the answer to the problem is treating addiction as a disease.

“There's still this thought and this idea out there that, 'Oh you must be a bad person, you must be a broken person,’” Burns said. “And as long as there is there's going to be a denial of the people that have it and denial from the family around it to see it.”

If you or someone you know is struggling with substance abuse and want to seek help or who want to anonymously report meth or drug activity are encouraged to call the Meth Hotline at (877) NO-2-METH or by clicking here. Treatment is also available by calling the County’s Access and Crisis Line at (888) 724-7240 or by calling 2-1-1.

How much do you know about methamphetamine?
Take this quiz below to find out.