‘Rose in a Rose Garden': Terminally Ill Man's Last Wish is to Marry The Love of His Life

A terminally ill man stood before the love of his life on a downtown rooftop Saturday ready to commit to her for the rest of his life.

Richard Mathis and his new bride, Laura, met about three years ago, when they were both struggling with homelessness.

“We kind of hit it off from there,” Mathis told NBC 7, unable to hide his smile. “I said, ‘Well, we’ve both got the same interests, we might invest that in being together, so that’s kind of how it came about.” 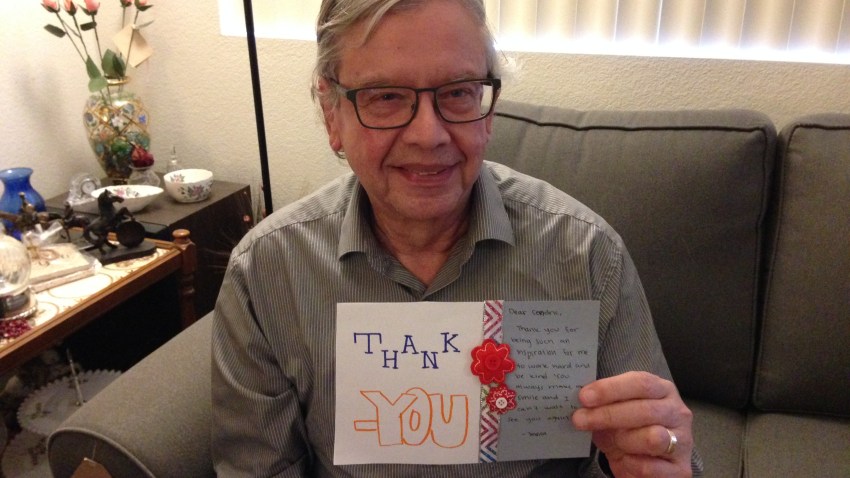 Mathis said he believes a successful relationship is a mix of many factors, but what attracted him to Laura wasn’t complicated at all. “She’s like a rose in a rose garden and she’s the largest one out there with all the different pretty colors,” he said still smiling.

The two are now living in a small apartment together, but their financial problems are made that much more difficult because of Mathis’ illness. He suffers from coronary heart failure and is in hospice.

“I guess the whole heart just decides to stop doing its thing,” he explained. “Although mine is not as efficient in one area, it’s still efficient enough in another to keep me going.”

Apreva Hospice, the Alpha Program and the Dream Foundation collaborated to bring together Richard and Laura’s wedding. “It is quite a love story that had happened here,” Patty Shigley, a nurse practitioner and clinical director for Hospice, said.

“We came to know Mr. Mathis because he’s ill and so he met his wife here in San Diego. They have a little dog named Tasha, and they are part of the Alpha program, they’re part of Apreva Hospice and between those two organizations and the Dream Foundation, they’re able to participate in a wedding and that’s where their love story launches new.”

Mathis’ nurse served as the maid of honor Saturday, and a hospice chaplain performed the ceremony.

“When people hear the word hospice, when they think about something like that, it’s not really about dying, it’s living and it’s living it to the fullest, and so that’s what Richard has been surrounded here with,” Shigley said.

The wedding, she said, felt special because of Mathis' situation.

“It’s about a man who doesn’t feel good, he’s ill,” Shigley said. “But he still found love and has zest for life, and one of his last wishes is to marry the love of his life,” she said.

Richard and Laura were pronounced husband and wife in front of their friends, family and their dog Tasha, and walked into their life knowing no matter what struggles they have faced or will in the future, they at least have each other.