Hundreds of people gathered on the steps of the San Diego County Administration building on Monday to urge county leaders to take control of reopening the local economy a day before more businesses were likely to be hit with additional restrictions.

Among them were business owners who said they will defy public health orders and remain open for indoor service if the county shifts to the most restrictive Tier 1 due to a surging case rate.

At the "We Mean Business" rally on Monday, organizers called the state’s new tiered system “fatally flawed” and called on the San Diego County Board of Supervisors to take control of local reopening plans.

Scientists and medical professionals spoke about reopenings amid the pandemic at a press conference hosted by Supervisor Nathan Fletcher. NBC 7’s Audra Stafford has details on what they had to say, as well as business owners who are concerned about their wellbeing.

"People are backed into a corner, they got tough decisions to make for one reason -- because the governor has not chosen yet to relinquish the control of our county and our city to local people who should be the ones," said Todd Brown, owner of Bub's restaurants. "Our supervisors should be controlling the path we move forward on. They live here, they work here, they know what's actually going on in the city of San Diego."

Small Businesses and The Pandemic

How local business owners are fighting to keep their businesses alive. 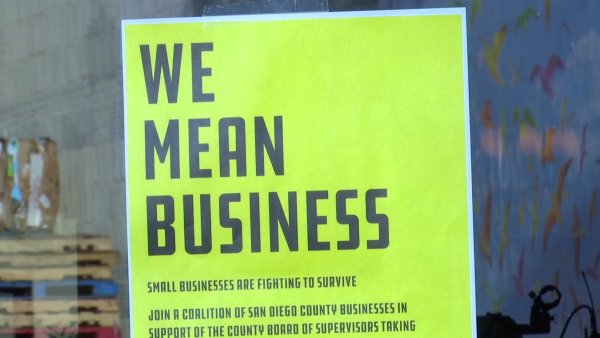 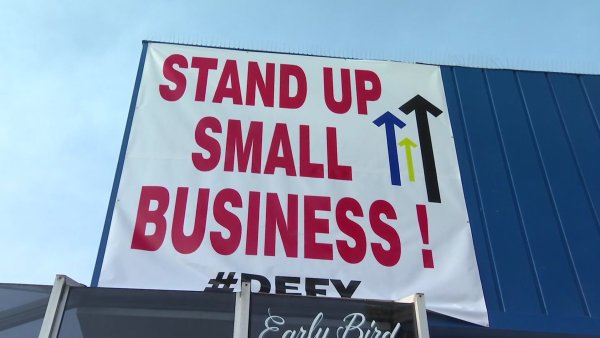 The group is backed by Supervisor Jim Desmond, a vocal supporter of reopening businesses. Last week, Desmond pitched a plan to local leaders that would give individual businesses the opportunity to ignore state-issued closures and capacity limits as long as facial coverings are worn. That motion did not receive support from the other supervisors, though.

“I stand with all those business owners who are barely hanging on,” Desmond said in a statement in response to the small business rally. “I’m listening and I’m going to continue to fight for you!”

At the rally, Desmond said the county has proven it can identify, treat and protect the region's most vulnerable people "and still be open for business."

Desmond said he would be the voice for the business owners who showed up on Monday during a closed-door session scheduled for that evening where board members would discuss the county's next steps.

County supervisors doubled down on their stances surrounding commercial reopening while businesses owners braced for bad news from the state. NBC 7's Omari Fleming breaks it all down.

It was the board's second such meeting in as many weeks. Board Chairman Greg Cox said no decisions were made at the meeting.

Currently, San Diego County is in Tier 2, also known as the Red Tier. It allows indoor operation of some businesses and houses of worship. However, its state-calculated rate has reached 7.9, which is above the metric to remain with loosened restrictions.

Most businesses in San Diego County may be ordered to shut down indoor operations as soon as Tuesday under the state's guidelines. It will be for some the third time since the pandemic began that businesses have had to change course due to changing public health orders.

But business owners say the system doesn't take into consideration what is happening on the local level.

But Supervisor Nathan Fletcher, who is strongly opposed to disobeying the state's orders, said that disobeying state orders was not the solution.

“I know this is difficult," Fletcher said during his own news conference on Monday morning. "Being in small business is hard as it is, much less during a global pandemic. But simply telling you ignoring pubic health orders, or to blame anyone else, I would not be telling you the truth. It wouldn’t be honest. My colleagues are exploiting your pain and your anger, and it’s wrong.”

Fletcher has championed for a steady reopening that’s based on the state’s measurements on case rates. While surrounded by a group of medical and scientific professionals at a press conference on Monday, he said that the county should work together to combat the spread of COVID-19.

“It is time as a county that we redirect our energy and our efforts toward slowing the spread, exercising precautions, making difficult decisions and doing it responsibly," he said. "We’re in a battle against the virus and we must confront that reality.”

He went on to acknowledge the hardships that the pandemic has bestowed on small business owners, and commented on some of his colleagues' statements.

“I know you want to feed your families and support your workers, but what is being sold to you as a solution will not help your situation," he said. "It will only make it worse.”

Fletcher went on to accuse Desmond and Supervisor Kristin Gaspar of using closure orders to stir tension between state government and their constituents.

"They are exploiting the pain and suffering small businesses are going through as the result of a global pandemic as a wedge for political gain," Fletcher said.

Gaspar responded Monday to Fletcher's comments, saying he "ironically" and "incorrectly" blamed her for "playing politics with COVID."

"Let me set the record straight: I have never supported any approach to re-opening that was not specifically supported by our Public Health Officer and clinical leadership team," Gaspar said in a statement. "Supervisor Fletcher knows this but prefers to continue spreading this false narrative because he is actively running a campaign against me."

In her statement, Supervisor Gaspar invited Fletcher to have a socially distanced conversation with her about the matter.

"I will continue to do my job protecting public health and working with small businesses and leave the politics to Supervisor Fletcher," she concluded in her statement.