A Marine Corps battalion commander testified Friday that in retrospect he would have halted the exercise that killed nine of his Marines whose amphibious assault vehicle sank off the Southern California coast but at the time he did not have accurate information to make such a decision.

Lt. Col. Michael J. Regner said his decisions were based in part on what other commanders told him, including that all the Marines had completed their swim certifications and that the aging vehicles they were in had been fixed and were ready for the mission.

He said he was also unaware that the Navy had changed plans that day and did not launch a safety boat.

“Had I known that at the time, I would have said ‘No we're not going to go into the ocean without a safety boat,'" Regner said.

Regner gave his account to a three-officer panel at a Board of Inquiry. That panel will issue a recommendation to the commanding general of Regner's unit as to whether the decorated officer, who served in Iraq and Afghanistan, should be considered for discharge just shy of his 20-year mark and be denied retirement benefits.

However, a decision isn't expected until later this month and will follow Boards of Inquiry pending for other officers, including one scheduled for next Tuesday.

Marines Open Another Probe Into Sunken AAV Blamed on Errors 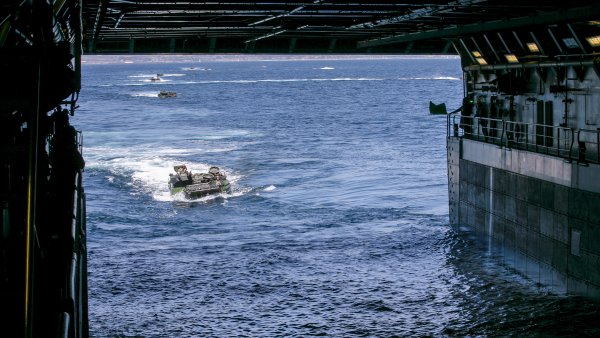 A Marine Corps investigation found that inadequate training, shabby maintenance and poor judgment by leaders led to the July 30, 2020, sinking of the amphibious assault vehicle in one of the deadliest Marine training accidents in decades.

The vehicle — a kind of seafaring tank — had 16 people aboard when it sank rapidly in 385 feet (117 meters) of water off the coast of San Clemente Island. Seven Marines were rescued as the vessel was returning to a Navy ship on a training exercise.

Regner was relieved of command of the landing team of the 1st Battalion, 4th Marine Regiment, 15th Marine Expeditionary Unit, shortly after the sinking. A Marine Corps statement at the time said his removal was based on a “substantial amount of information and data” and cited a loss of trust.

The government argued at Friday's hearing that while Regner is not the only one to blame for the tragedy, his “substandard" leadership set the groundwork for things to go as badly as they did.

Lt. Col. Michael McDonald said in the military’s closing statement that Regner decided to risk sending his Marines who were inexperienced and had not completed their training, including how to escape the vehicles, into the ocean.

“That was just an absolute comedy of errors," McDonald said. “This didn't come out of the blue."

Regner's attorney said the panel's task is to determine if Regner is of value to the Marine Corps and has potential for future service, which he argued his client clearly has demonstrated.

Regner became emotional when he talked about how he has served his country his “entire adulthood," becoming a Marine as the United States went to war following the Sept. 11, 2001, terror attacks.

He said he has excelled throughout his career, including in the last 18 months after he was relieved from his command and assigned to another job.

“Hell I grew up in this,” Regner said, wiping a tear. “My dad was a Marine. I was raised by the Marine Corps.”

Regner said he was aware that 12 of the 13 amphibious assault vehicles his Marines would be using in the training had problems but that a fellow battalion commander who oversees the vehicles assured him they would be fixed before the exercise.

He said he tried to get his Marines extra training in the water and warned senior leaders that his troops had never done this type of exercise.

He said he was constrained by a number of factors including the fact that Marines had to squeeze in their preparations after being deployed to the U.S-Mexico border under the Trump administration, and then they faced restrictions due to the coronavirus pandemic that interrupted their training.

But he said he was led to believe by a company commander that all had been certified as swimmers, though two of the troops had not.

The panel was expected to review 6,000 pages of investigative reports and evidence before making its decision.

The Marines use the vehicles to transport troops and their equipment from Navy ships to land. The armored vehicles outfitted with machine guns and grenade launchers look like tanks as they roll ashore for beach attacks, with Marines pouring out of them to take up positions.