A couple was saved from a burning home by good Samaritans, according to witnesses who live on Greencastle Street in Santee in San Diego County

A small plane fell out of the sky over Santee, California, on Monday, barreling into two homes and killing at least two people.

The crash set off an explosion that rattled an entire neighborhood. It also alerted heroes who came running to their neighbors' rescue.

Jim Slaff told NBC 7 that neighbors pulled his mother, Marie Morris, out of a window of her burning home and rescued his stepfather, Phil Morris, from the backyard.

Slaff said his parents were watching TV in their living room when the fuselage slid into their home. Neighbors who rescued them told Slaff the couple was “obviously shaken up but doing OK” and taken to UC San Diego Medical Center.

Michael Keeley 43, ran barefoot outside when his home shook. He saw the UPS truck in flames and found the Morrises calling through an open window.

With thick smoke inside the neighbors' home and flames licking the roof, Keeley stood on a rock and reached through to grab Marie's arm and help her climb out of the window. He said her forearms were burned, and her hair was singed.

“I’m glad I didn’t have to go inside with my bare feet,” said Keeley, a probation officer.

Neighbors also knocked out fencing to rescue Phil from the backyard. After the couple was pulled onto the sidewalk, Keeley said Marie kept pleading for her dog that was believed to be inside the home.

But moments later, there were explosions inside the home and the group helped the couple move a safe distance away from the flames until paramedics arrived.

Slaff said he didn't think his parents' dog made it. Officials didn't specify the injuries to Phil and Marie Morris, but Slaff said they are expected to pull through.

Andrew Pelloth, 30, was working from home when he heard a whirring and then a loud boom.

“My initial thought was that it was a meteorite coming down," he said. "I could hear it falling and then some kind of explosion.”

Pelloth lives across the street from the retired couple and saw the house and a UPS delivery truck engulfed in flames. Mangled ruins of vehicles were in the couple's driveway.

Videos From the Crash 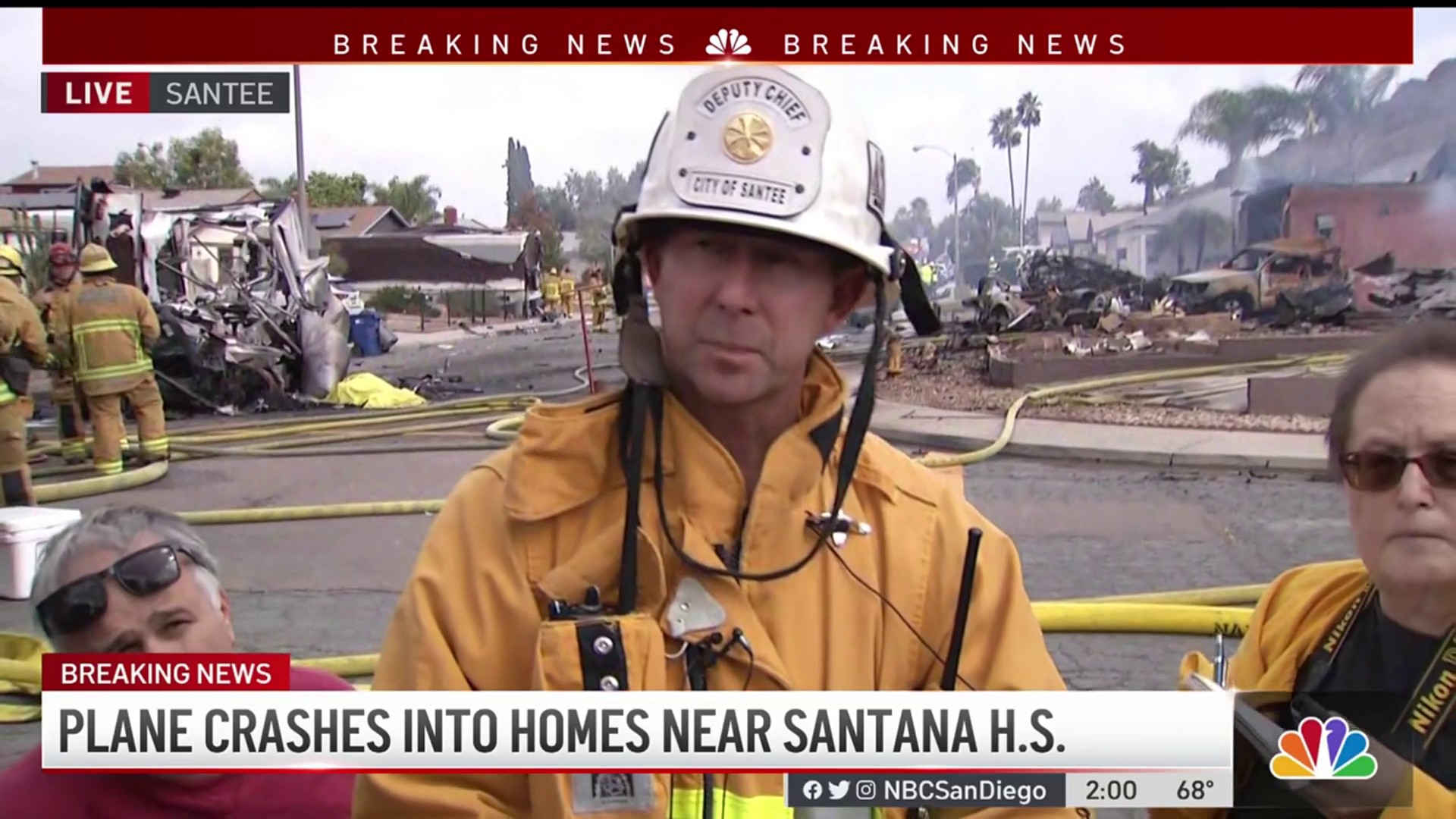 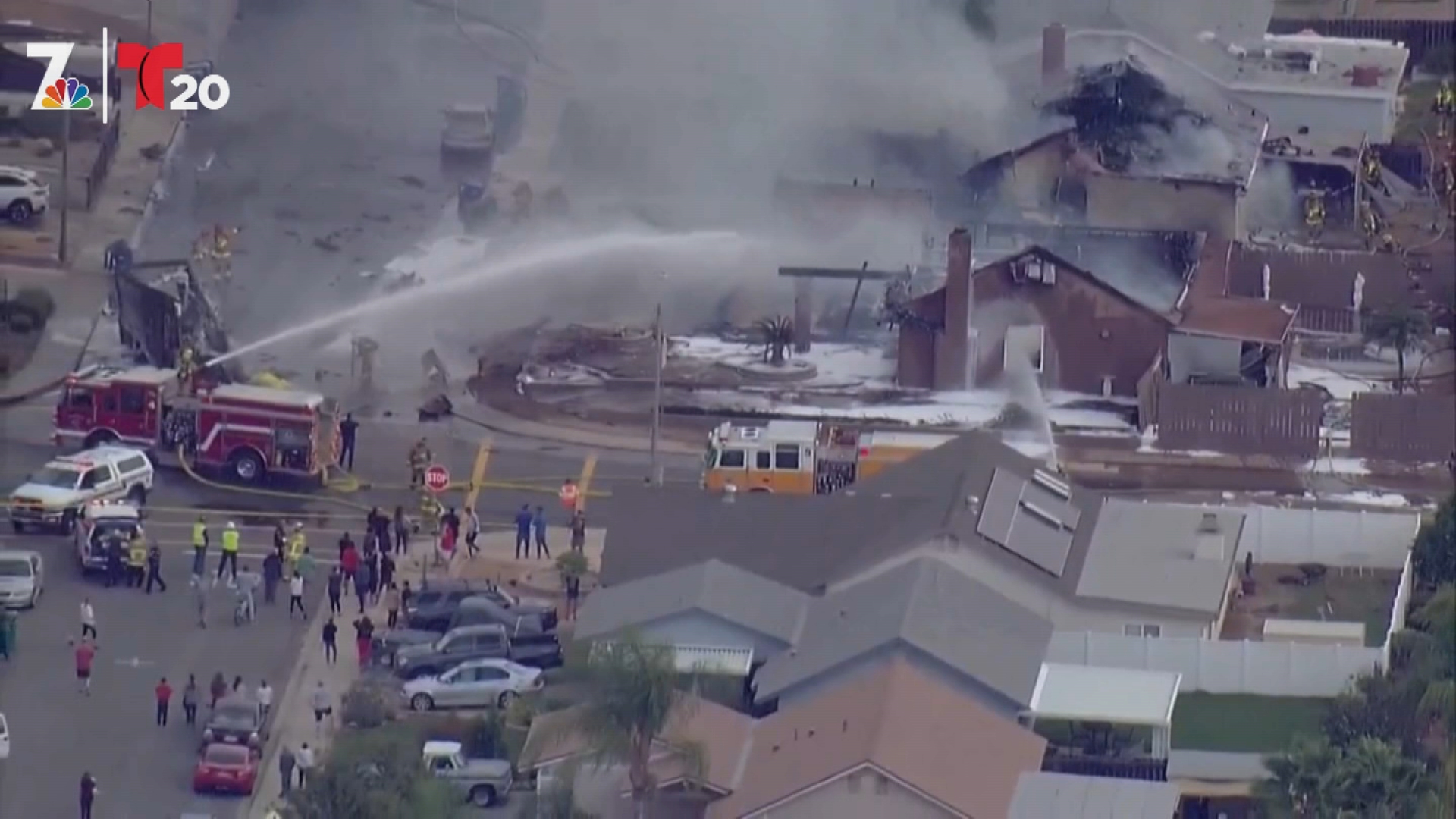 "They started pulling stuff out of the window, and then they got Marie out," Bohen said. "She was concerned about her dog. At that time the house was starting to become fully engulfed. I don't know where Phil was. [Marie] was too incoherent to say anything. She just was out of it. Her hair was burned, her face was burned."

Erik Huppert, 57, joined Keeley in the rush to help get Slaff's mother to safety.

“I heard a big boom," Huppert said. "I was in the house and then my wife yelled down from upstairs that she heard a plane crash. And so, I ran out as fast as I could to see if I could help anyone. By the time I got there, the house was in flames."

Will Proctor, another neighbor, described his frantic search for cover as the plane banked above his street.

A small plane crash near a Santee school has caused massive damage to at least two homes in the area.

"The last thing I saw was when it came over the street," Proctor said. "I took off running into the garage because it kinda looked like, from where I saw him earlier, he was coming towards my house, but he was in a turn and came over Mike's house. And just, wow. Loud explosion. You could feel the heat all the way from my house."

The house next door to Phil and Marie's was also destroyed. A woman at the scene told NBC 7 the home belongs to her younger brother but said he and his family weren't home at the time of the crash.

"We are very, very, very lucky they were not home," Breana King said. "Their dog wasn't there, so even their dog is safe. At this point, I am very eager to hug my little brother."

While King was relieved by her brother's fortune, she was sad to hear about the devastation other families were likely feeling.

"I am so sorry for the people whose families have been impacted by this, and from what I understand there are a couple of people who didn't make it, so I'm so sorry. It's pretty terrifying," King said.

As of 5 p.m., officials had confirmed at least two people died, and two more had been hospitalized with injuries. One of the dead was a UPS driver, according to the company. Investigators say the pilot of the plane was likely killed.

King said the neighborhood's proximity to the airfield has always worried her.

"This happens pretty frequently, with Gillespie field being right here, I feel like this happens at least once a year," she said. "So I just hope that they find some way to make this a little bit of a safer corridor."

Santee resident Lili Patch was about to eat lunch at home on Monday when she head what sounded like something crashing into her garage. When she and her husband ran outside, they saw a fire caused by a plane that had crashed into a home nearby. Her driveway security camera captured the final moments of the small plane as it went down.

Lili Patch, who lives a few blocks away, feels the same.

"Living in the flight path, a crash like this always concerns area residents," Patch said. "This is like the nightmare everybody worries about."

Patch and her husband were about to have lunch when they heard the plane crash.

"It felt like someone crashed into my garage," she said.

Patch thought it was possible the aircraft was having some mechanical issues because loud noises were coming from the plane just before it crashed to the ground.

"You could hear the engine from a distance," Patch added.

For a second, Patch and her husband thought it might have been an earthquake, but when they went outside they saw the fire.

The couple then checked footage from their home security cameras and realized the crash had been captured by their system. A camera positioned at the top of the driveway captured footage of the plane as it dove toward the horizon, and in the audio, the sound of the plane's engine can be heard.

"You can see it come down and it just, full-force, crashed," Patch said. "It didn't spin, nothing. You just heard it and it came down."

Details of the Crash

The plane went down at around 12:15 p.m., according to officials with the Santee Fire Department.

According to witnesses, the plane went down along Greencastle Street where it intersects with Jeremy Street. The wing of the plane clipped a UPS truck that was nearing a stop sign, killing the driver. The fuselage then slid toward two homes and exploded, witnesses said.

Footage from SkyRanger 7 showed parts of the fuselage piled in the backyard of one of the destroyed homes. Investigators say at least five more homes were damaged.

Before UPS confirmed one of its drivers perished in the crash, witnesses thought a charred box truck near the end of the street could have belonged to the delivery company.

At around 3 p.m., an official with UPS confirmed the truck that was clipped by the plane and said the driver inside had died at the crash scene.

“We are heartbroken by the loss of our employee and extend our deepest condolences to his family and friends," read a statement from the delivery company. "We also send our condolences for the other individuals who are involved in this incident, and their families and friends."

The plane touched down just a few blocks away from Santana High School.

Investigators say the plane was a twin-engine Cessna C340 on its way from Yuma, Arizona, to Montgomery-Gibbs Executive Airport in Keany Mesa. The pilot may have experienced issues in the air and tried to turn back toward Gillespie Field in Santee, according to officials.

NBC 7 learned the pilot was Dr. Sugata Das, a cardiologist at the Yuma Regional Medical Center.

“We are deeply sad to hear news of a plane owned by local cardiologist Dr. Sugata Das which crashed near Santee,” said Dr. Bharat Magu. Chief Medical Officer at YRMC. “As an outstanding cardiologist and dedicated family man, Dr. Das leaves a lasting legacy. We extend our prayers and support to his family, colleagues and friends during this difficult time."