Three people died and dozens were injured when a boat suspected of smuggling undocumented passengers crashed off the coast of Point Loma last week, but the tragedy could have been far worse if lifeguards, U.S. Coast Guard and Border Patrol personnel, and several good Samaritans didn't dive into action.

Among those good Samaritans was Cale Foy, who was more than just in the right place at the right time. He was also the right rescue swimmer.

For Foy, a Navy First Class Petty Officer, Sunday's rescue at sea is what he and his aircrew team practice daily. But when duty called, Foy was in Point Loma on his usual Sunday trail walk with his wife and kids. 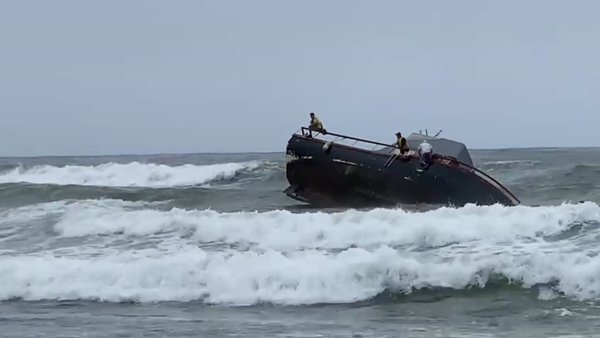 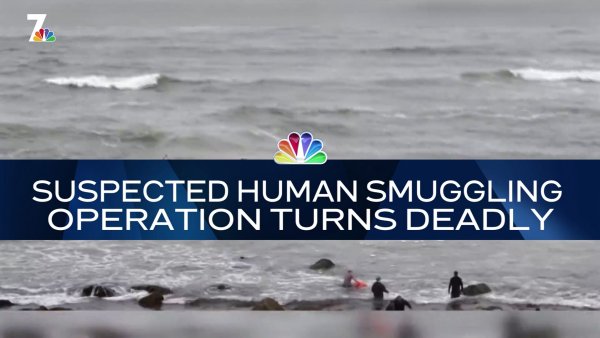 The Coast Guard search was called off Monday morning, but the cleanup of debris from that 40-foot boat was still being collected, reported NBC 7's Allison Ash

It was a mere coincidence that Foy was within 200 yards of the water when a suspected smuggling vessel with at least 32 people on board capsized inside the surf line.

Foy didn't give it another thought, he just went to work.

"At that point, I took everything I had that I didn't want to get wet, gave it to my wife and said 'I love you and I will be right back,'" Foy said.

On his way to the water, Foy said he was joined by a man enrolled in Navy SEAL training.

Foy, who teaches water rescue for the Navy, asked the sailor if he was a strong enough swimmer to get past the high surf. He assured him he was. The two stood for a second on a rise to see what was happening before drawing up what he called the “game plan.”

The 40-foot cabin cruiser was out of fuel and was being torn apart by rocks in swells Foy estimated were 5 to 8 feet high.

"They hit the rocks and now they are starting to jump into the water," he remembered. "The water was unforgiving that day."

Foy and the sailor helped two migrants who managed to swim to the shore before they plowed into the chilly water. Wearing a t-shirt, pants and hiking boots, Foy ran into the waves and then took a chance and dove under, praying that he would not be slammed into rocks below.

Foy and the SEAL trainee swam a quarter mile to the wreckage and held on to catch their breath.

Foy said he then gave the SEAL recruit a quick lesson in how to rescue people at sea, cautioning him that people panic and pull rescuers under the water. He suggested pulling the migrants from behind by their preservers or clothing toward the wreckage so they could hold on to the debris until rescue boats arrived.

Then the two headed toward the screams.

"With the 5 to 8-foot waves going up and down, you are able to see maybe 10 to 15 feet around you. The swells overtake what is beyond the swell," Foy explained.

Beyond the swell, 25 yards away, were three survivors shouting for help and trying to stay above water. There were two more 100 yards away, unconscious, with their faces in the water.

Foy swam towards one woman who was face down in the water, wearing a life preserver.

oy used his body to keep her head out of the water, carrying her on his chest as he swam toward the floating debris. He placed her on it and then pulled it toward a lifeguard boat that had arrived.

He got her into the boat, hopped in and started CPR on her as they rolled over the waves.

Foy traveled with the lifeguard boat back to land and continued to do CPR for 20 more minutes.

Despite his efforts, she died, he said.

Foy stayed for another two hours on the dock, helping tend to people brought in on the lifeguard boats.

In the end, Foy and the SEAL recruit got six migrants to the floating wreckage. Four of them survived.

Foy says the rescue swimmer motto is, "So others may live." Thanks to his efforts, four of the half dozen people he plucked from the wreckage did.

In part of a statement, Naval Air Forces Force Master Chief Trenton Schmidt wrote,
"ASW1 Cale Foy represents the best of us. He saw people who desperately needed help, and he responded. We are extremely proud of him."

The U.S. Border Patrol said there is every indication to believe the boat was a smuggling vessel used to traffic migrants into the U.S. illegally.

The captain of the boat was a male U.S. citizen, according to Customs and Border Protection. 30 of the passengers were Mexican Nationals and one was form Guatemala, CBP said.