The San Diego Convention center will be used to house some of the thousands of unaccompanied minors seeking asylum in the U.S. Local leaders say this is an emergency response

Hundreds of unaccompanied migrant children are expected to arrive in San Diego Saturday, the U.S. Health and Human Services (HHS) confirmed Friday. The children will be taken to the Convention Center where they will be temporarily sheltered until they can be transported to safe housing elsewhere in the United States.

San Diego County leaders have been coordinating with FEMA and HHS to prepare the currently vacant convention center for the arrival of as many as 1,400 migrant children.

Approximately 476 migrant children, all girls, ages 13 through 17, arrived Saturday, officials confirmed. The children are coming in from Texas and under the custody of immigration authorities, a spokesperson for the Mexican consulate said.

“We are here because we were asked by the U.S. federal government to provide a temporary home for young people, unaccompanied minors, who are at our US-Mexican border, and who need a place to go that is safe and will keep them well cared for while we do the important work of reuniting them with families or sponsors living in the U.S." San Diego Mayor Todd Gloria said in a briefing Saturday. 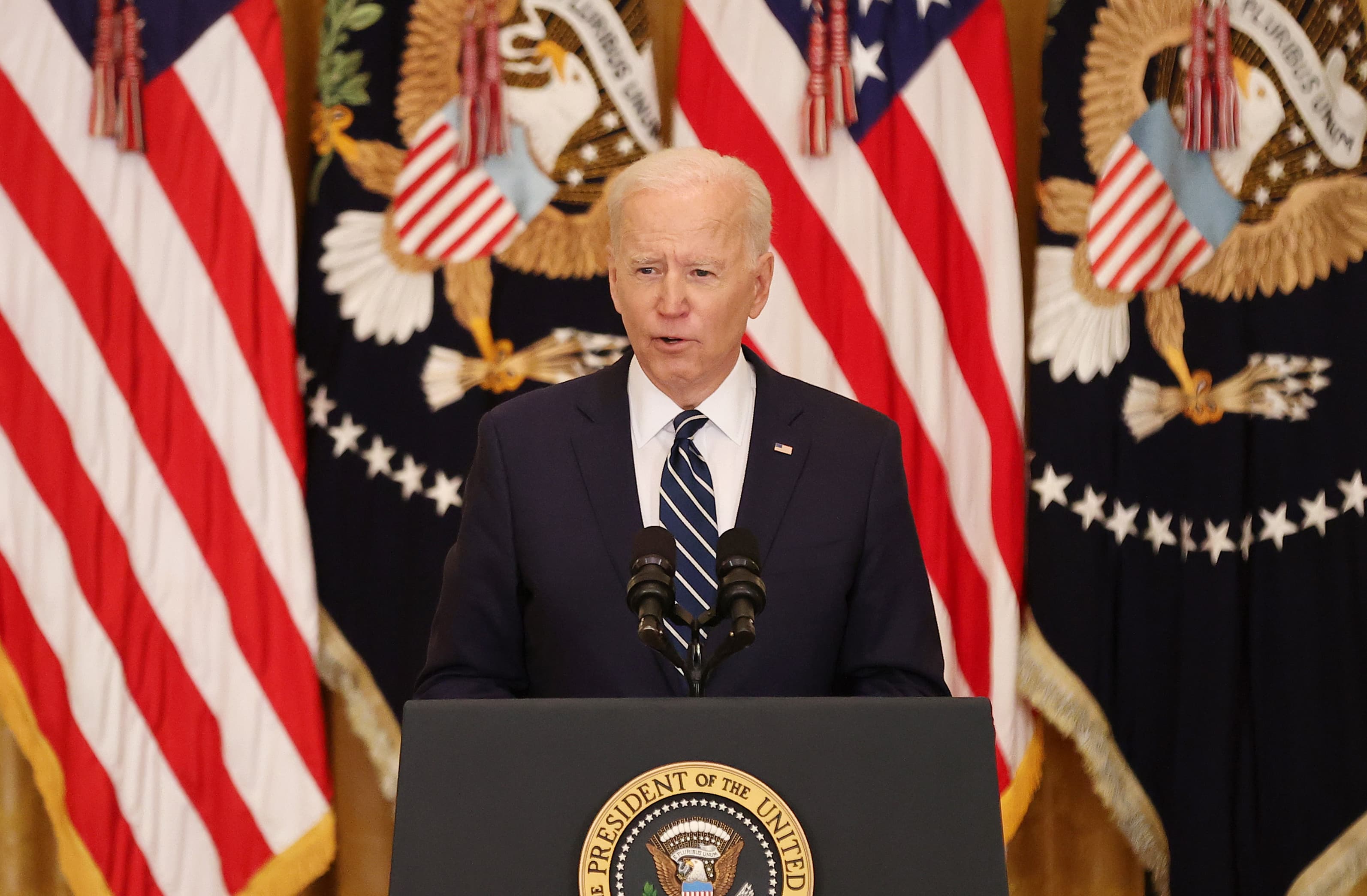 Biden Vows Action on Migrants as He Defends Border Policy 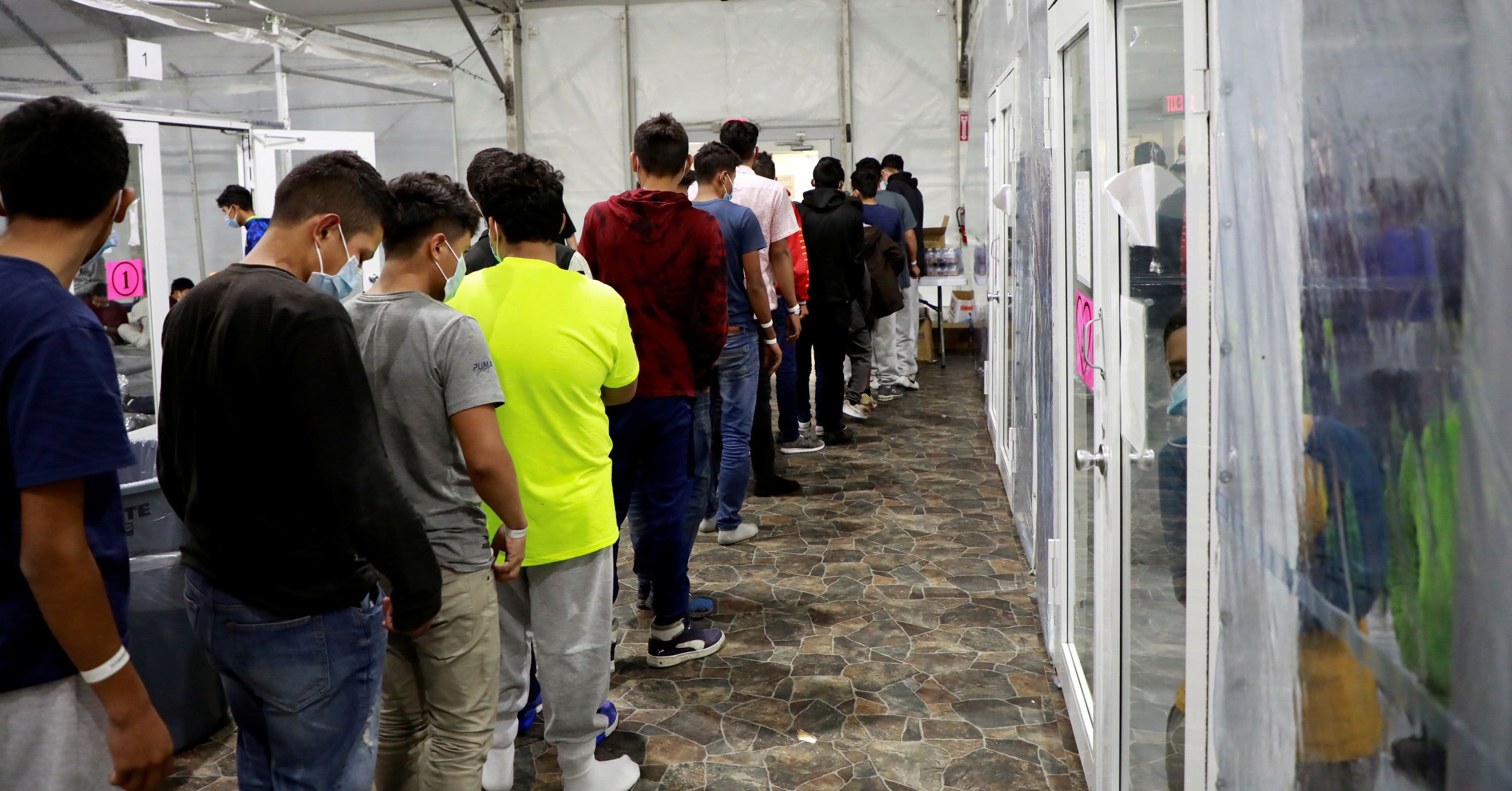 The convention center operation will provide food, a place to sleep, educational and recreational activities, and showers. Rady's Children Hospital will lead in providing medical care to the girls at the convention center, Todd Gloria said.

The kids will not be permitted to leave the convention center until reunification happens.

Photos: Inside the San Diego Convention Center Being Used to Provide Temporary Shelter for Unaccompanied Minors

During that time, caseworkers with South Bay Community Services will attempt to contact existing family members in the United States or sponsors who will house the minors while they go through court proceedings for their asylum claims.

"The goal is not a long-term housing situation for these kids it’s a safe stable environment to transition to their family members," Fletcher said at a briefing on Tuesday.

The government said there were nearly 5,000 children in Border Patrol custody as of Tuesday and an additional 11,551 at Department of Health and Human Services shelters.

A total of 500 girls between the ages of 13 and 17, are being flown in from Texas under the custody of immigration authorities, and will then be brought to San Diego. The convention center will be their home for at least the next month or so, until they can be reunited with family or sponsors.

The county would operate the facility but it would be managed and paid for by the U.S. Department of Health and Human Services, officials said.

Across the border, in Tijuana, Mexico, hundreds of teenagers -- sometimes young children and in at least one case, an infant -- have been living in pop-up tents and underneath tarps, video captured by Telemundo 20 found. The migrants have been living in Mexico awaiting their turn to ask for asylum in the U.S.

The Biden administration also plans to set space at a Texas Army base for about 5,000 unaccompanied minors, which he says are his priority from a surge of people attempting to cross the border.

The number is at the highest level since a spring 2019 surge under Trump, according to the most recently released statistics. But the numbers appear to be rising and Department of Homeland Security Secretary Alejandro Mayorkas recently warned that they are on pace to hit a 20-year peak.

At his first press briefing on Thursday, President Joe Biden sought to portray it as a seasonal spike and not, as critics have said, a result of his decisions to halt construction of border wall projects started under former President Trump or his support for broad immigration legislation. He added that increases in problems in migrants' home countries have pushed them to set out for the U.S.

But in recent weeks, the number of unaccompanied minors has dramatically increased, straining the ability of CBP to hold them in their detention facilities until they can be turned over to the Department of Health and Human Services. The department houses them until they can be placed with relatives or sponsors while the government decides whether they have a legal claim for residency, either under asylum or for some other reason.

Previously, the convention center was used as a homeless shelter because of the pandemic. San Diego Mayor Todd Gloria the people have gone to other facilities run by Father Joe's, the Alpha Project and other groups.

The plan to move homeless individuals out of the convention center was in the works long before the city and county officials agreed to partner with the federal government to use the site for sheltering migrants.

This is the first site in California offering this kind of shelter, officials said. Local leaders have offered up the convention center through July. A spokesperson for the convention center said events have been canceled until then but major events are back on the books for August while the center is awaiting reopening guidance from the state.