A Spring Valley man was arrested with 14 guns including assault rifles after posting videos apparently preparing for a mass shooting in downtown San Diego.

A Spring Valley man who posted graphic videos online of himself pointing assault rifles at unknowing pedestrians from a room in the Sofia Hotel in Downtown San Diego is now in police custody on felony weapons charges.

His arrest came after an unknown person contacted federal agents on Nov. 30, stating Homoki had “gone off the deep end” and warned law enforcement that if confronted “he will open fire on federal agents or police.” 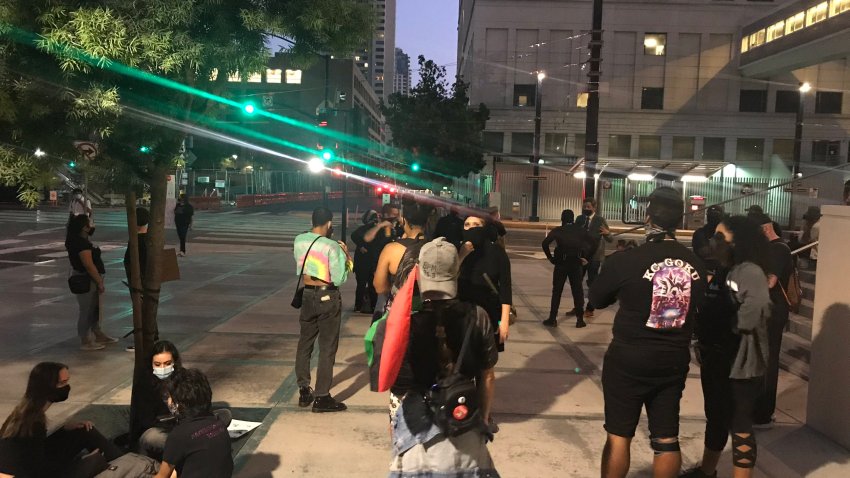 The tipster also said that Homoki had told them that he had “a plan” in place in case any warrants or police involvement occurred.

Homoki’s apparent instability is evident in videos that he posted on YouTube this past September that serve as a reminder of the threat of gun violence that continues to haunt Americans.

According to court documents obtained by NBC 7 Investigates, Homoki checked into the Sofia Hotel in March 2019 under the alias, Stephen Anderson.

During that stay, Homoki shot video from what appeared to be a body camera. The video showed a messy hotel room with several guns, high-capacity magazines, and hundreds of bullets strewn across the hotel room floor.

A portion of the videos can be seen below.

The video begins with Homoki crawling on the floor, grabbing bullets. He loads a bullet into an automatic handgun and points the gun out the window at pedestrians walking downtown around the Federal Courthouse. As he points the gun outside, Homoki says, “Jams, boom.”

He throws the gun on the ground and picks up an assault rifle on the couch. He points the unloaded rifle out the window and pulls the trigger and says, “One down, more to go.”

In the video, Homoki appears frantic, running to and from the bedroom. At one point he runs back to the window overlooking a crowded Front Street and grabs a half-full bottle of liquor. He unclips one magazine cartridge and reloads an empty cartridge into the assault rifle.

He tosses the assault rifle on to the couch and grabs the handgun. He points it at the head of a mannequin he placed on the couch and pulled the trigger.

Two days later Homoki posted another video on YouTube of him pointing and “dry firing” through the window of the hotel room.

In the comments section, Homoki, again using the alias of Stephen Anderson, wrote, “Everything is fabricated for entertainment and none of these are intended for any audience. This is a private video. Shall not be published online for anyone to view and this is satire and not in any way shape or form to be taken seriously. Should children with toy guns deserve to get shot?”

San Diego Police and the FBI declined to comment on the arrest and the videos. The District Attorney’s Office, however, confirmed that Homoki was arrested on Dec. 5 on three felony weapons charges, one misdemeanor weapons charge, and willful cruelty to a child.

No formal charges have been filed yet.

Homoki’s neighbors told NBC 7 Investigates that he was quiet and kept to himself.

“It was like a carnival here with police. I just saw a whole lot of cops, U.S. Marshalls,” said Ellen, one of Homoki’s neighbors who wished to remain anonymous.

“Good thing they got him,” added Ellen as she watched the YouTube video Homoki posted.

San Diego Police Sergeant Matthew Botkin was unable to comment on the particulars of the case, however, Botkin stressed the important role that the anonymous tipster played in arresting Homoki, and ensuring the guns were removed.

“This is an example of what happens when the community sees something and said something. This person was instrumental in letting us know what was happening,"

Continued Botkin, “From the time the tip was provided to the FBI, to the time it came to SDPD was a total of four days and by the end of those four days we had arrested and safely removed the person involved.”