A man who was shot by San Diego Police Department officers in February 2021 has filed a claim against the city alleging he was shot "without necessity or lawful justification, causing severe injuries."

Stephen Wilson was shot multiple times by SDPD officer Kelly Besker, a 26-year veteran of the force, near G Street and 3rd Avenue in Downtown San Diego on Feb. 25, 2021.

The claim Wilson filed is for an unspecified amount of damages totaling at least $25,000.

Wilson, 68, who now lives in Northern California, alleges in the claim filed in mid-August that he was "standing near the corner of Third and G in the Gaslamp Quarter, eating some food. He was approached by San Diego police officer Kelly Besker and possibly other(s). After brief conversation, Officer Besker shot [Wilson] three times."

On the night of the shooting, SDPD Captain Rich Freedman told NBC 7 that as an officer approached the man, he pulled out a knife and threatened the officer. The officer then shot the man at least once.

NBC 7's Lauren Coronado has the latest from the scene of the shooting,

According to body-worn camera video released less than a week following the shooting, Wilson told Besker that he had no knife and that someone had knocked over a shopping cart full of his belongings. The footage showed several items and debris was strewn all over the street corner. Besker could be heard telling dispatchers that Wilson didn't appear to be armed. "He has food in his hands," Besker communicated through his radio.

Wilson can be seen in the video defying several orders from Besker to put his food down, and appeared increasingly agitated while telling Besker to get away from him and leave him alone. Wilson began to retreat as Besker and a second officer moved closer. Moments later Besker spotted a knife in Wilson's back pocket.

Wilson immediately brought his left hand behind his back and pulled the knife out. As he reached back, Besker told him, "Do not grab that knife." At the same time, the second officer had moved in closer and was just two feet away from Wilson, according to SDPD.

"In a fluid motion, Mr. Wilson retrieved the knife from his back pocket, brought it forward and released it to fall to the ground," SDPD said in a caption of the released footage.

According to SDPD, Besker fired his service weapon about a third of a second after Wilson released his grip on the knife. Three shots were fired and Wilson fell to the ground. 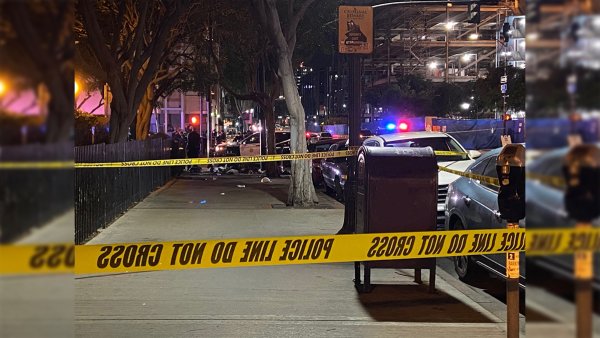 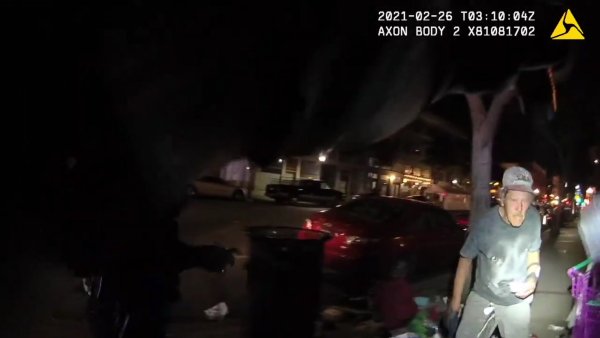 Wilson alleges that being shot by Besker led to severe injuries, including internal injuries and caused Wilson to be hospitalized for several weeks. He also says he sustained permanent injuries and incurred extensive medical bills.

Wilson filed the claim under the belief the city was responsible for the alleged injury due to "negligence, battery, excessive force, unlawful seizure and violation of Civil Code 52.1 civil rights violations" by Officer Besker. Wilson also believes that the city is at fault due to "negligent tactics used leading up to and causing the shooting" as well as "negligent training and supervision."

In California, before a person is able to file a legal suit against a public entity, such as state, county, and local government agencies or departments, or against a government employee, the individual must first file a claim meeting the requirements of the California Tort Claims Act.

With very few exceptions, an individual cannot sue the government for financial damages unless they had filed a written claim within the legally specified time period, most often within six months of the incident.

When asked, a spokesperson for SDPD was unable to confirm that the claim had been received by the city, but said that if there was pending litigation, the department was unable to comment on the matter.

The incident was being investigated by SDPD's Homicide Unit, which is protocol for cases in which officers fire their service weapons. Immediately following the incident, Besker was placed on administrative leave according to Captain Freedman.

The FBI and U.S. Attorney's Office will monitor the investigation. The Police Shooting Review Board will also review the incident, as will the Commission on Police Practices, according to SDPD.