San Diego Police Department Officer Jonathan "J.D." De Guzman, 43, and his gang-unit partner, Officer Wade Irwin, were shot in the line of duty on July 28, 2016; De Guzman did not survive

Convicted murderer Jesse Gomez was painted in two different lights on Thursday -- on one side as a criminal with a pattern of violence and on the other as a human being who's lived a tough life -- as attorneys argued whether he deserves the death penalty or life in prison without parole.

Last week, Gomez was found guilty of first-degree murder of gang-unit Officer Jonathan "J.D." De Guzman, 43, with a special circumstance allegation that Gomez committed the crime while knowing that De Guzman was a police officer. Gomez was also found guilty of premeditated attempted murder of De Guzman's partner, Wade Irwin on the night of July 28, 2016.

De Guzman, a 16-year veteran of the San Diego Police Department, died at a hospital, while Irwin was shot in the neck and hospitalized for nearly a month.

The trial now goes to the penalty phase where the jury must decide whether Gomez's crimes warrant death. Although the death penalty is currently abolished in California, the determination could place Gomez on death row. 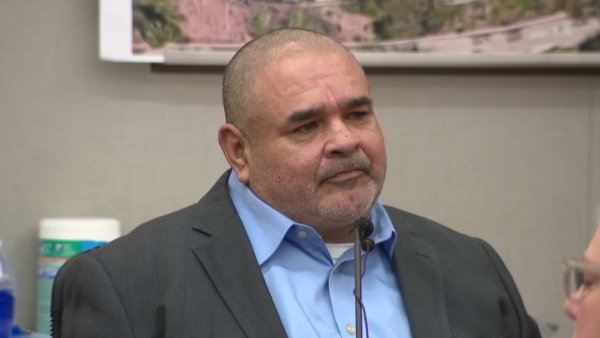 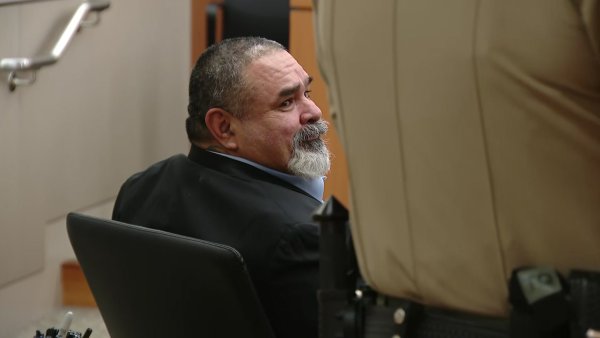 Throughout the penalty phase, which is expected to stretch into next week, prosecutors for the county will call the family of fallen officer De Guzman, his colleagues and present video testimony to convince jurors that Gomez deserves the death penalty. The Defense team will take the jury through Gomez's life and call character witnesses to show the circumstances that could have lead to his crimes.

"The question you have to ask yourself is: How does Jesse Gomez, who starts as this innocent young child, how does he end up in here in court? How does he end up a convicted murderer? How does he go from that to a 53-year-old man who's homeless, who's an addict, who's divorced, who's living in the back of his truck," Defense Attorney Troy Britt told jurors in his opening statement.

Prosecutor Valerie Summers, on the other hand, highlighted Gomez's history of illegal weapon possession, which, she argued, proves the defendant has a tendency for violence and deserves the death penalty.

“You will have evidence that despite the fact that the defendant was a felon from the time of 1983 on, that he continually, time and time and time again, was willing, ready and able to use violence,” Summers said.

Britt, who said Gomez was an unwanted and abused child, argued that the evidence presented by prosecutors was not enough to justify the death penalty.

“The violence is he possessed ammunition. He possessed a knife. Based on that evidence you can look at that and think to yourself, ‘that’s not the evidence that makes me believe that Mr. Gomez is the worst of the worst.'”

Britt added that Gomez has been in prison for the last five years without issue. He also said Gomez has congestive heart failure -- both of which should be weighed in considering the option of life in prison without parole.

Gomez, who has been stoic throughout his murder trial, showed some emotion during the attorneys' arguments. He could be seen wiping his eyes and bowing his head at times.

Testimony on Thursday included statements from a cab driver who Gomez assaulted in 1983. Other San Diego police officers and parole officers who interacted with Gomez were also scheduled to take the stand.

The hearing was expected to continue on Monday with loved ones of both De Guzman and Gomez presenting testimony.

A San Diego Police Department officer wounded in the line of duty five years ago – as his partner was killed just feet away from him – recalled the terrifying moments when he thought, he too, was going to die, reports NBC 7's Artie Ojeda

On the night of July 28, 2016, De Guzman, 43, and his fellow SDPD gang unit partner, Irwin, were patrolling the Shelltown neighborhood of San Diego.

At Gomez’s preliminary hearing in 2019, Irwin testified that as he and De Guzman patrolled, they noticed two men split up and start walking along the north and south sidewalks of Acacia Grove Way.

Irwin said he thought the man on the south side was someone else he had previously arrested. De Guzman stopped the car and Irwin got out of the passenger side, leaving the door open.

Irwin approached the man – Gomez – and asked if he lived in the area. Irwin testified in 2019 that upon speaking to Gomez, the officers were shot “almost immediately.”

“We have two heroes,” San Diego Mayor Kevin Faulconer said of Officers Jonathan “JD” De Guzman and Wade Irwin at a press conference on July 30. The officers were shot in Southcrest on July 28. De Guzman did not survive.

The officer said Gomez walked up to the open passenger door of the SDPD patrol car and fired, point-blank, at De Guzman as he sat in the driver’s seat. Prosecutors have said the attack on De Guzman happened so quickly, he didn’t even have time to draw his service weapon.

Gomez was found a short time later in a ravine off South 38th Street near the scene. He was hospitalized with a gunshot wound to his upper body but survived.

De Guzman was beloved by his colleagues and family. In 2003, the officer survived a stabbing while on duty, and was awarded a Purple Heart by the department for his valor. Even after that incident, De Guzman returned to the force and his passion to protect the public never wavered.

Irwin returned to duty in June 2017, less than a year after the deadly shooting.

The shootings of the officers jolted San Diego.

Memorials and touching tributes were held across the county in De Guzman’s honor – from the planting of trees in Southcrest to Crossfit workouts held in remembrance.

In 2018, Irwin received the congressional badge of bravery.

San Diegans mourned SDPD Officer Jonathan DeGuzman, who was fatally shot while on duty Thursday night, by leaving cards and flowers at a memorial outside of the police department. NBC 7’s Diana Guevara reports.

The Trial of Jesse Gomez: August and September 2021

Opening statements in the trial of Gomez began on Aug. 17, 2021. The proceedings lasted several weeks. Closing arguments were held on Sept. 9, 2021.

On day one of the trial, the jury watched dramatic body camera video of officers desperately trying to save their colleagues. The video showed the first officer arriving on scene minutes after De Guzman and Irwin were shot.

Officer Irwin took the stand on Aug. 24, 2021, and provided emotional testimony about the night he thought he would die.

Gomez took the stand in his trial on Sept. 2.

He testified that he thought De Guzman and Irwin were gang members – not police officers – when he opened fire on them.

Gomez and his defense team do not deny that he shot the two gang-unit officers. But they argue he should not face the special circumstance allegation because he did not know he was shooting at law enforcement.

Gomez said when he was approached by Irwin that night, he couldn't see anything but a shadowy figure. Then, he heard a voice.

Defense attorney Jessica Petry said in her opening statement that in a dangerous neighborhood like San Diego's Shelltown, when someone asks where someone is from, the question usually ends in a violent encounter.

"The way they approached me. I mean, it happened so fast. It was done within seconds," Gomez said to defense attorney Troy Britt from the witness stand at the San Diego Central Courthouse last week.

"Then, all I heard was, ‘Where you from?’ I thought they were gang members," Gomez said. "I was afraid for my life."

Gomez didn't know "until later on" that he had fired on officers, he said.

“I didn’t know what to do. Then I got shot and I turned and ran,” he testified.

Prosecutors asked Gomez to demonstrate in court how he shot at officers.

Officers Gomez and Irwin were gang unit officers. Gomez was a gang member who had plenty of previous interactions with police, he admitted. The neighborhood where the shooting occurred has been known for gang activity.

But prosecutor Valerie Summers argued in her opening statement that Gomez did know they were officers – that he was a felon in possession of a gun and knew he would go to jail if he was caught. So, she said, he started firing on officers immediately.

On the stand, Gomez denied the accusation. He said he was not afraid to go back to prison as a convicted felon in possession of a gun.

Summers also questioned Gomez's statement that he could not see that the two men who approached him that night were in a black and white patrol vehicle.

Gomez also said he had a hard time remembering the events of the day because he had smoked methamphetamine three or four times that day.

A San Diego police officer was given one of the highest honors in law enforcement. Officer Wade Irwin received the congressional badge of bravery from Congressman Duncan Hunter Monday. In 2016, a suspect opened fire on Irwin and his partner, Officer Jonathan DeGuzman. DeGuzman died in the shooting. Irwin was shot in the neck but he was able to return...

In her closing statement, Summers painted a vivid picture of the night SDPD Officer Jonathan "J.D." De Guzman and Oficer Wade Irwin were shot. She recalled the emotional testimony given by Officer Irwin and the body-worn camera footage that showed fellow officers responding to the scene to save their comrades.

Her forceful tone contrasted that of defense attorney Troy Britt, who made a quiet yet emotional plea to the jury to understand the circumstances of Gomez' life that led him to believe his life was in danger.

Britt does not deny that Gomez killed Officer De Guzman, a 16-year veteran of the force, and shot Officer Wade Irwin in the neck, but he argues that Gomez did not know they were police officers at the time of the shooting -- a claim Gomez made while testifying last week.

Britt then argued that missteps by the San Diego officers -- not flashing their lights and sirens, not turning on body-worn camera and not announcing themselves to Gomez -- played a part in the acts of that day.

The jury deliberated for less than a day and a half to reach a conclusion in the murder trial.

Dozens upon dozens of law enforcement officers swarmed San Diego’s Southcrest community overnight after two Elite Gang Unit officers were shot at on Boston Avenue. One officer died, the other was seriously wounded. This is raw video from the scene, via SDNV.