The zoo congratulates first-time parents Cora and Fernando on the beautiful, new addition to their family

There’s a new youngin romping around the San Diego Zoo Safari Park after a tamandua gave birth to a pup last month, it was announced Friday.

Cora the tamandua and Fernando the tamandua became proud, first-time parents on July 21 when they welcomed their little one, who does not yet have a name. Mama and pup are both healthy and enjoying their time bonding, the San Diego Zoo Wildlife Alliance said in a statement.

“Both mom and pup are doing very well—and Cora is an attentive mom, keeping her pup nestled in their den the majority of the time, but venturing outside for up to an hour some days,” the zoo’s statement said. 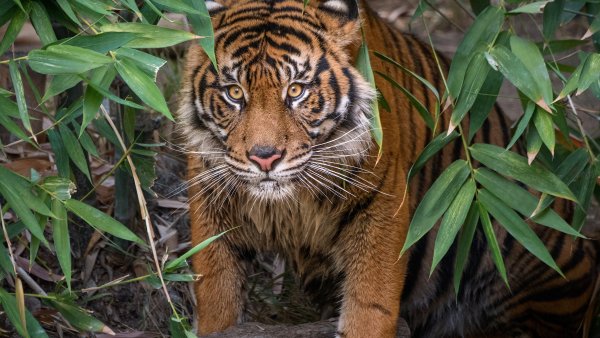 Tigers at Safari Park May Have Been Exposed to COVID-19

Just less than a month old, the pup is already demonstrating great use of her strong claws by clinging to Cora’s back as mom climbs around their habitat. The zoo believes the pup will nurse for up to six months and move on to solid foods like delectable worms and a tasty protein-rich tamandua-friendly smoothie after two or three months.

Mama Cora has it all covered since the father, Fernando, has no role in raising his daughter. The zoo said he does not share the same habitat as mom and pup since tamanduas are usually solitary animals except for when they mate.

Baby tamandua was born after Cora and Fernando were paired through a breeding recommendation from the Association of Zoos and Aquariums’ Southern Tamandua Species Survival Plan.

Cora and the pup will be in their off-view habitat for about two months while they continue to bond.